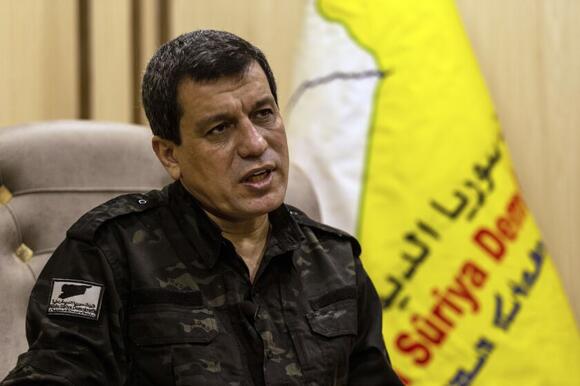 The chief of Russian forces in Syria has met with a Kurdish commander over threats by Turkey to launch a new incursion into northern Syria, a Kurdish spokesman and an Arab TV station said Monday.

Siamand Ali, a spokesman for the Kurdish-led Syrian Democratic Forces, confirmed to The Associated Press that Lt. Gen. Alexander Chaiko met Sunday with Kurdish commander Mazloum Abdi in northeast Syria, adding that he has no details about what they discussed.

Russia has called for de-escalation along the Turkey-Syria border.

Turkey has launched a barrage of airstrikes on suspected militant targets in northern Syria and Iraq over the past week, in retaliation for the Istanbul bombing that Ankara blames on the Kurdish groups. The groups have denied involvement in the bombing, and say Turkish strikes have killed civilians and threatened the fight against the Islamic State group.

The Lebanon-based pan-Arab Al-Mayadeen TV reported that Chaiko discussed with Abdi tensions along the northern border and what can be done to avoid a new major incursion by Turkey. The station, which has reporters in different parts of Syria, said Chaiko suggested the deployment of Syrian government forces along the border with Turkey up to 30 kilometers (19 miles) south of the border.

Another SDF spokesman, Aram Hanna, told the Al-Arabiya TV station Monday that the Russians put forward during the talks the conditions of the Turkish side. He added without giving detail: “We reject all the demands of the Turkish occupiers.”

U.S. considering plan to down Chinese balloon over Atlantic

The Biden administration is considering a plan to shoot down a large Chinese balloon suspected of conducting surveillance on U.S. military
KANSAS STATE・27 MINUTES AGO
San Diego Union-Tribune

China balloon: Many questions about suspected spy in the sky

The massive white orb drifting across U.S. airspace has triggered a diplomatic maelstrom and is blowing up on social media
OREGON STATE・4 HOURS AGO
San Diego Union-Tribune

North Korea says it's prepared to counter U_S_ military moves with the "most overwhelming nuclear force" as it warned that the expansion of the United States' combined military exercises with rival South Korea is pushing tensions to an "extreme red line."
WASHINGTON STATE・2 DAYS AGO
San Diego Union-Tribune

The company aims to help Ukraine with intelligence but first must get approval from the U.S. government.
SAN DIEGO, CA・2 DAYS AGO
San Diego Union-Tribune

A huge, high-altitude Chinese balloon is sailing across the U.S. The spectacle drew severe Pentagon accusations of spying on Friday — while sending some excited or alarmed Americans outside with binoculars
KANSAS STATE・21 HOURS AGO