Update Given On James Harden's Potential Return From Foot Injury 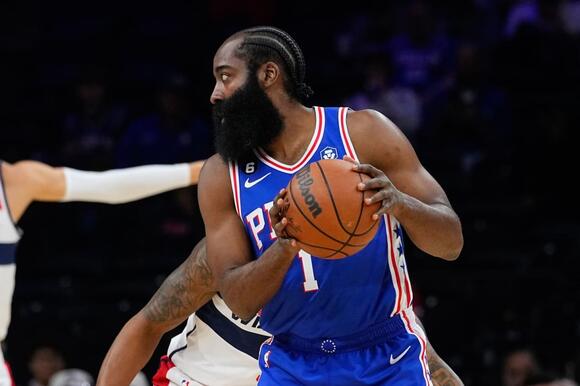 Being out with a strained right foot tendon since November 2, Philadelphia 76ers guard James Harden is nearing a return.

The Philadelphia 76ers have been hit hard by injuries early on during the 2022-23 NBA season, as James Harden, Tyrese Maxey and Joel Embiid have all been forced to miss chunks of time.

Harden has not played since November 2 against the Washington Wizards due to a strained right foot tendon originally, it was said that the All-Star guard would wind up being sidelined for about a month.

Well, here we are just about a month later and now, an update has been given on the former league MVP’s status.

According to Keith Pompey of The Philadelphia Inquirer, Harden is expected to return from his strained right foot tendon injury in a few days, an injury that has kept him out of the team’s kast 11 games.

While the 76ers have sustained success without their stars in the lineup, going 7-4 over their last eleven games, they desperately need Harden, Embiid and Maxey back if they are to be real title threats in the Eastern Conference.

Currently 11-9 on the season, the Sixers are currently the 6-seed in the Eastern Conference and they find themselves just two games up in the loss column from being out of the playoff picture entirely at this point in the season.

Prior to his injury, Harden was averaging 22.0 points, 7.0 rebounds and 10.0 assists per game this season while shooting 44.1 percent from the floor and 33.3 percent from three-point range.

What makes him such an important player in Philadelphia’s offensive attack is the fact that he is their primary ball-handler and the one that sets all the plays up. Joel Embiid may be their main scorer, but Harden’s ability to get others open and facilitate his team’s offense is extremely important.

Looking at the 76ers’ schedule, they are set to begin a three-game road trip following a home game on Monday night. Should James Harden not return at some point over that road trip at the end of the week, December 9 at home against the Los Angeles Lakers could be a game that the Sixers circle in regards to Harden returning to action.

At this point, the team has not given any further updates on James Harden’s status and they continue to list him as “OUT” on their daily injury report.

The Fast Break Podcast hosted by our own Brett Siegel is now LIVE!

Be sure to catch up on the latest news and intel from around the league by checking out The Fast Break Podcast, now streaming on Apple Podcasts and Spotify with new episodes releasing every Friday.

The Golden State Warriors have announced that Ryan Rollins will undergo surgery.
SAN FRANCISCO, CA・2 HOURS AGO
FastBreak on FanNation

According to Keith Pompey of The Philadelphia Inquirer, Furkan Korkmaz has requested a trade from the Philadelphia 76ers.
PHILADELPHIA, PA・2 HOURS AGO
The Comeback

Shocking and frankly terrifying news broke regarding Memphis Grizzlies superstar Ja Morant on Sunday afternoon. The story doesn’t quite paint the 2022 Most Improved Player or his associates in the most positive of lights either. The Athletic delivered a bombshell report that detailed the shocking incident. It occurred last month after a game between Morant’s Grizzlies Read more... The post NBA world reacts to absolutely shocking Ja Morant news appeared first on The Comeback: Today’s Top Sports Stories & Reactions.
MEMPHIS, TN・23 HOURS AGO
FastBreak on FanNation

Los Angeles Lakers guard Patrick Beverley sent out a tweet after Kyrie Irving was traded from the Brooklyn Nets to the Dallas Mavericks.
DALLAS, TX・22 HOURS AGO
FastBreak on FanNation

According to Jack Pilgrim of On3, Boston Celtics legend Rajon Rondo could join the Kentucky Men's Basketball coaching staff.
BOSTON, MA・2 DAYS AGO
FastBreak on FanNation

BREAKING: Kyrie Irving Has Been Traded

According to Shams Charania of The Athletic and Stadium, the Brooklyn Nets are trading Kyrie Irving to the Dallas Mavericks.
BROOKLYN, NY・1 DAY AGO
FastBreak on FanNation

Los Angeles Lakers guard Russell Westbrook has been putting up big numbers off the bench.
LOS ANGELES, CA・1 DAY AGO
FastBreak on FanNation

On Sunday, the Los Angeles Lakers announced that they have assigned rookie guard Max Christie to the South Bay Lakers in the NBA G League.
LOS ANGELES, CA・1 DAY AGO
FastBreak on FanNation

Shams Charania of The Athletic and Stadium reported an update on Steph Curry.
SAN FRANCISCO, CA・1 DAY AGO
FastBreak on FanNation

Chris Haynes of TNT and Bleacher Report reported that the Phoenix Suns offered Chris Paul to the Brooklyn Nets in a package for Kyrie Irving.
PHOENIX, AZ・18 HOURS AGO
FastBreak on FanNation

Kyrie Irving has been ruled out for Saturday's game.
WASHINGTON, DC・2 DAYS AGO
FastBreak on FanNation

Draymond Green Is Closing In On Golden State Warriors History

Draymond Green is on the verge of Golden State Warriors franchise history.
SAN FRANCISCO, CA・1 DAY AGO
FastBreak on FanNation

LeBron James shared his thoughts (with ESPN's Michael Wilbon) on the Los Angeles Lakers not landing Kyrie Irving in a trade with the Brooklyn Nets.
LOS ANGELES, CA・35 MINUTES AGO
FastBreak on FanNation

Ja Morant is on the injury report for Sunday's game.
MEMPHIS, TN・1 DAY AGO