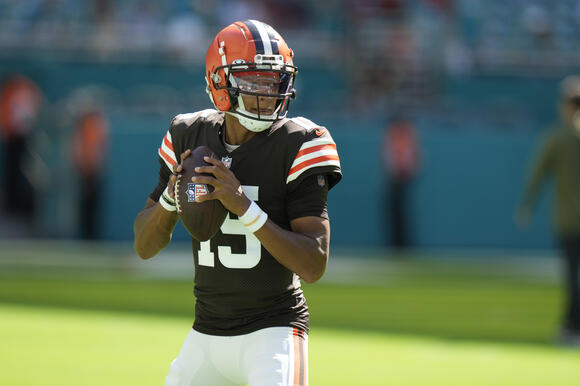 The team made the announcement on Monday afternoon following the return of Deshaun Watson to the team’s 53-man roster.

Dobbs served as the backup to Jacoby Brissett for the first 11 games this season but did not see the field. He has played in six games over the last four seasons with the Pittsburgh Steelers.

The Browns also announced the signing of offensive tackle Myron Cunningham and placed lineman Will Holden on the injured list. The team also released wide receiver Chester Rogers from the practice squad.

Lamont Samuels caught 29 passes for 517 yards and 6 touchdowns this past season.
FARRELL, PA・2 DAYS AGO
WKBN

Canfield junior Jake Schneider was named Player of the Game for his efforts in the Cardinals' 50-42 win over Austintown Fitch.
CANFIELD, OH・1 HOUR AGO
WKBN

A class action lawsuit against the maker of the popular Fireball Cinnamon Whisky filed in January 2023 alleges the brand mislead consumers with one of its bottles.
KANSAS STATE・2 DAYS AGO
WKBN

An East Side man has been indicted by a Mahoning County grand jury on charges he broke the arm of a child.
MAHONING COUNTY, OH・10 HOURS AGO
WKBN

Three brothers were sentenced Tuesday in Mahoning County Common Pleas Court for the robbery and beating of a Loveland Road man in 2021.
YOUNGSTOWN, OH・2 DAYS AGO
WKBN

Report: Man lost in Warren robbed by 5 men at gunpoint

The report states the man told him to get out of his car and give him everything he had.
WARREN, OH・2 DAYS AGO
WKBN

Antuan Parker showed no emotion as he was sentenced.
WARREN, OH・2 DAYS AGO
WKBN

Reward offered for information leading to arrest of wanted fugitive

Contractor accused of scamming clients back in jail

John Bartos was arrested this week by sheriff's deputies after they discovered he had warrants in several courts.
BOARDMAN, OH・1 DAY AGO
WKBN

Warren detectives are investigating the city’s latest homicide and have identified the victim as an 18-year-old man.
WARREN, OH・2 DAYS AGO
WKBN

If you're in the market for a used car this new year, beware that shady sellers are still using an old trick in order to make a bigger profit.
OHIO STATE・2 DAYS AGO
WKBN

Man in custody after running from police during traffic stop

A man wanted by Girard police for drug possession and taking off running during a traffic stop has been found and arrested.
GIRARD, OH・2 DAYS AGO
WKBN

A Boardman man was arraigned after he was accused of robbing a Boardman bank in May.
BOARDMAN, OH・6 HOURS AGO
WKBN

The verdict comes after a six-day trial.
CANFIELD, OH・2 DAYS AGO
WKBN

A Youngstown man who was arrested by Girard police on a gun charge has pleaded guilty to a federal weapons charge.
GIRARD, OH・1 DAY AGO