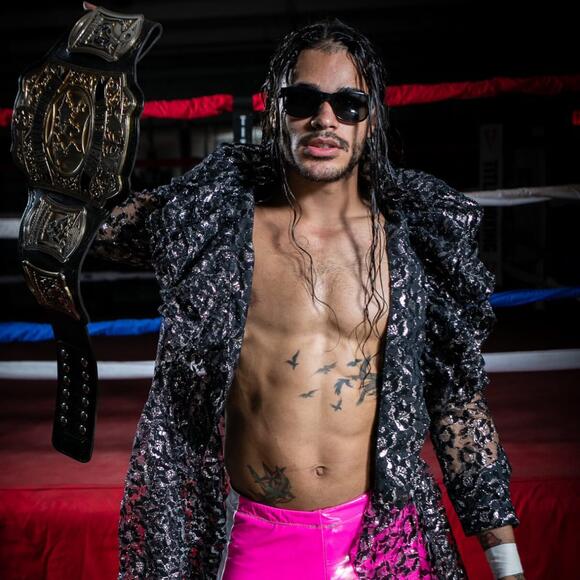 Vidal revealed he has signed a multi-year deal.

Jai Vidal has become the first openly gay man to sign a contract with Impact Wrestling.

Vidal revealed the news during a podcast appearance on OutSports' LGBT In The Ring , saying he signed a multi-year deal with the company and learning about how he made company history on the morning the podcast was recorded.

"It's knocking down barriers and everything that I have always wanted to do for my community in professional wrestling. I talk about this a lot, but growing up, I had nobody to look up to when it came to representation," he said. "To know that maybe one day down the line somebody will see me on TV and will be inspired by me being openly gay, it will inspire them to chase whatever goals and dreams they have as an open person in the LGBTQ community."

The 25-year-old debuted for Impact in October 2021, losing to Eric Young and JONAH in a pair of TV matches. In recent weeks, he has re-emerged as the content creator and personal stylist for Gisele Shaw. While he has been on screen with Shaw, he has yet to get back into the ring for Impact.

Shaw is also a trailblazer for the company, coming out as transgender this past June.

Vidal works regularly on the indies, appearing for GCW, Florida's CCW, Las Vegas' Future Stars of Wrestling and PCW, where he is their Ultralight Champion.

Michaels spoke to the media ahead of Saturday's Vengeance Day.
FLORIDA STATE・1 DAY AGO
F4WOnline

Poffo's passing was revealed by Jim Duggan on Thursday.
1 DAY AGO
F4WOnline

One spot remains in the Chamber match to determine Bianca Belair's WrestleMania challenger.
2 HOURS AGO
F4WOnline

Roman Reigns will make his first appearance since the Royal Rumble.
13 HOURS AGO
F4WOnline

Adam Cole joined Wrestling Observer Radio with Garrett and Dave talking about his injury and road to recovery.
1 HOUR AGO
F4WOnline

Sponsorship revenue is on pace to set an event record.
1 DAY AGO
F4WOnline

The company will kick off their first house show tour in March.
TROY, OH・2 DAYS AGO
F4WOnline

MJF vs. Takeshita announced for next week's AEW Dynamite

A total of five matches have been announced for next week's lineup.
2 DAYS AGO
F4WOnline

King has been with the company since early 2022.
2 DAYS AGO
F4WOnline

The Samoan SWAT Team also faced The FBI on this week's episode.
11 HOURS AGO
F4WOnline

Four-way no. 1 contender's match set for Impact No Surrender

The next challenger for the Impact World title will be determined later this month.
LAS VEGAS, NV・1 DAY AGO
F4WOnline

A full recap of the 2023 Royal Rumble, details on WWE's Q4 investors call, and more.
18 HOURS AGO
F4WOnline

Khan explained to Marc Maron how flipping a column and row made a marked difference.
1 DAY AGO