Lakers News: After Big Night From Deep, LeBron James Reflects On How He Has Grown As A Shooter 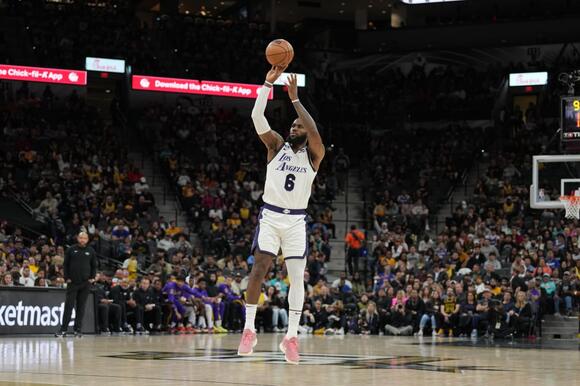 James has transformed his game beyond the three-point line.

At worst, LeBron James is considered a top 5 NBA player of all time. His longevity in terms of sheer minutes is unmatched, and his love for the game is why he is still dominant even in year 20.

Last night against the San Antonio Spurs, LeBron James was on fire from the three-point line, going 7-of-12 while leading the game in scoring with 39 and snatching 11 rebounds.

James spoke with Lakers sideline reporter Mike Trudell of Spectrum SportsNet about how he has improved his three-point shooting since entering the league.

“I think experience is the best teacher in life. Throughout my career, different situations have made me a better player. I wanted to put the work in, and try to be as dynamic on the floor and not have any deficiencies on the floor when I play. I’m happy I’m able to have a complete game right now.”

In LeBron’s first year in the league, he only attempted 2.7 threes a game, making 0.8 and shooting 29%. From his time with Cleveland, Miami, back to Cleveland, and now in Los Angeles, his attempts and percentages have risen. Now, the game has changed drastically, and you need to shoot threes to be relevant, but it’s like night and day with how much LeBron has improved and adapted.

Trudell mentioned how long-time Spurs coach Gregg Popovich would back off James so he could shoot the ball rather than bulldoze his way into the paint, where he has always been great.

The 37-year-old is not showing partially well from three so far, but he is a 35% three-point shooter in his five seasons with the Lakers. His best season from three was in 2012-2013, shooting 40% but only attempting 3.3 threes per game.

The evolution of LeBron has been a pleasure to watch. James is one of the best to ever lace them up, and we’re lucky to witness him play for the purple and gold.

Why Wenyen Gabriel Has Been Out Of LA's Rotation Lately

The big has barely played on this current road trip.
LOS ANGELES, CA・1 DAY AGO
AllLakers

Could the Pat Bev Experience finally, mercifully be coming to a close?
LOS ANGELES, CA・1 DAY AGO
AllLakers

The NBA wants to make sure everyone is able to watch potential history.
LOS ANGELES, CA・2 DAYS AGO
AllLakers

Is his NBA career over?
LOS ANGELES, CA・2 DAYS AGO
AllLakers

What a day it's been.
LOS ANGELES, CA・22 HOURS AGO
AllLakers

Would the Nets be amenable to this return package?
LOS ANGELES, CA・1 HOUR AGO
AllLakers

The shooting guard will be a restricted free agent in 2023.
LOS ANGELES, CA・2 DAYS AGO
AllLakers

A journeyman vet wants in on this hypothetical reunion.
LOS ANGELES, CA・19 HOURS AGO
AllLakers

The Lakers would love to have him in the lineup.
LOS ANGELES, CA・1 DAY AGO
AllLakers

A blockbuster and a more marginal deal.
LOS ANGELES, CA・27 MINUTES AGO
AllLakers

Lakers News: Kyrie Irving Out Ahead Of Nets Game Tonight -- Is A Trade Imminent?

LA could use a "gimme" game.
LOS ANGELES, CA・2 HOURS AGO
AllLakers

Lakers News: Oddsmakers Like LA To Win Against A Beatable Indiana Club Tonight