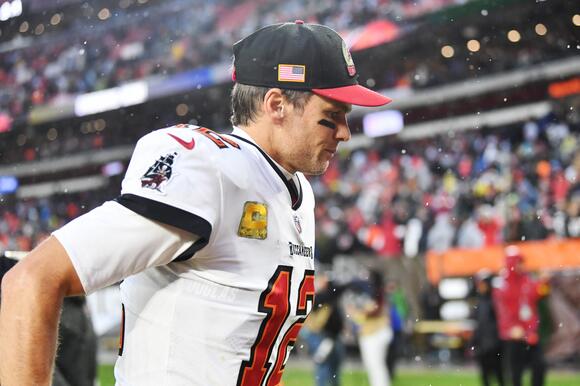 It was a spot Tom Brady has found himself in many times before.

With the score tied and 32 seconds remaining, the Buccaneers were presented with an opportunity to deflate the Browns and render their comeback for naught. Brady had three timeouts at his disposal, and only had to drive down to field goal range.

Instead, the Bucs called only one timeout. Regulation expired, and the Browns won the game in overtime. It was the first time Brady has ever lost when his team was leading by at least seven points with two minutes left.

The Buccaneers’ inexcusable clock mismanagement Sunday started during the Browns’ final drive in the fourth quarter. Cleveland ran off about 60 seconds inside of the two-minute warning, giving Tampa Bay little time to score.

Though the Bucs were leading, it would’ve been prudent for head coach Todd Bowles to call one timeout, probably before the Browns attempted their 4th-down play at Tampa Bay’s 12-yard line. It would’ve protected the Bucs against the worst-case scenario: the Browns scoring a game-tying touchdown with minimal time left.

That’s exactly what happened when Jacoby Brissett, one of Brady’s former understudies, connected with tight end David Njoku in the end zone. Since Bowles never signaled for a timeout, the Bucs were left with only 32 seconds. (After the game, Bowles said he never considered using a timeout in that spot, confirming his utter lack of awareness.)

Still, the Buccaneers had a shot. But when Brady completed a one-yard pass to rookie running back Rachaad White, something strange happened: the clock kept ticking.

The Buccaneers never called timeout, leaving Brady with just 15 seconds. That’s when he connected with Julio Jones for 26 yards, bringing the Bucs all the way to Cleveland’s 48.

It would’ve taken just one more solid completion to drive into field goal territory, but there wasn’t enough time. The Bucs called timeout with eight seconds left, and Brady could only fire off two hurried pass plays.

If the Bucs properly used their timeouts, it’s fair to surmise they would’ve had time for at least one more play. Maybe that’s all Brady would’ve needed.

While Bowles deserves a lot of blame for Tampa’s buffoonery, Brady takes responsibility, too. He could’ve called a timeout during the Bucs’ final drive, or at least barked at Bowles to call one.

"For every play that you give up on defense, they make an offense and vice versa,” said Brady. “You know, they stop you on defense, you don't make a play on offense.”

This season, Brady just hasn’t been making the plays. It looked like the Buccaneers were stabilizing at 5-5, with a big win over the Seahawks in Germany and 35-second touchdown drive to beat the Rams.

But then, they lost to Brissett.

Thanks to the abysmal nature of the NFC South, the Bucs are still in control of first place. At this point, they’re matching their rivals’ ineptitude with their own.

Thanks to the Boston Herald, we now know just how much of a mess the offense was for the 2022 Patriots. Matt Patricia and Joe Judge were incapable of coaching the New England offense, meaning QB Mac Jones never had a chance to lead the unit.
17 HOURS AGO
WEEI Sports Radio

The Media Column: Boston Herald’s Patriots exposé is the latest example of backstabbing in Foxborough

Bill Belichick loathes providing reporters with information at the podium. But in recent years, there’s been plenty of backstabbing around Gillette Stadium.
FOXBOROUGH, MA・1 DAY AGO
WEEI Sports Radio

The Bruins have faced both the Maple Leafs and Lightning in the last two weeks, and both were great games. They were also reminders that finishing first and only having to face one of them in the playoffs is pretty important.
BOSTON, MA・18 HOURS AGO