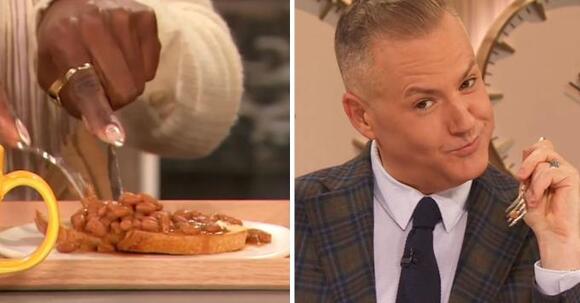 It looks like Stanley Tucci is going to have to work extra hard on his upcoming British food show to prove to Ross Mathews that England is home to some fine cuisine. During today’s episode of The Drew Barrymore Show, the Drew’s News co-host painstakingly choked down one popular U.K. dish: beans on toast.

Drew Barrymore and Mathews were joined at this morning’s table by British actress Kirby Howell-Baptiste, who assured the two that the food in her country is not as bad as people say.

“Whenever people say to me, ‘The food in England is terrible,’ I say, ‘You haven’t been to the right places,'” she explained. “I think England is like New York — the food is amazing, there’s so many different cultures and people.”

Mathews, however, wasn’t buying it. He told Barrymore and Howell-Baptiste, “Every time I go on vacation to the U.K., I come back and I lose weight.” When Howell-Baptiste said she would hook him up with the right places, he replied, “Give me a list because every time I go, at breakfast they try to give me toast with beans on it and I’m like, ‘What is going on?'”

Careful what you say, Ross, because Drew may very well whip out three plates of beans on toast and you’ll be forced to try it out on television … which is exactly what happened on this morning’s episode.

What do you think? Be the first to comment.

As the two women happily snacked on the treat, Mathews struggled to swallow one bite. While Barrymore described the British delicacy as “sweet” and “buttery,” and Howell-Baptiste pointed out that it’s “delicious” as the “bread gets all soggy,” Mathews couldn’t help but hide his disgusted face.

“You know what it tastes like?” he sarcastically asked the table. “Beans on toast.”

I guess we know what he won’t be ordering on his next trip to the U.K.

The Drew Barrymore Show airs on weekdays at 9:30 a.m. ET on CBS.

We know things are about to get serious when Drew Barrymore scoots her chair closer to her guest and holds their hand. During today’s episode of The Drew Barrymore Show, actress Nia Long revealed to the audience why she didn’t get a part in Charlie’s Angels, which was produced by Barrymore’s production company, prompting a discussion about diversity in Hollywood.
2 DAYS AGO
Decider.com

Drew Barrymore is the latest to weigh in on the Razzies drama. The anti-Oscars award show came under fire earlier this week for nominating 12-year-old Ryan Kiera Armstrong in their Worst Actress category for her part in the remake of Firestarter — the role that was originally played by a young Barrymore.
2 DAYS AGO
Decider.com

Every day we learn a little bit more about Drew Barrymore, and today’s episode of The Drew Barrymore Show was no different. The actress-turned-talk show host revealed what she prefers to wear to bed — or, better yet, what she doesn’t wear to bed. The conversation came...
3 DAYS AGO
Decider.com

The View can get heated and loud at the Hot Topics table, but an especially unusual noise interrupted yesterday’s broadcast, much to the surprise of viewers and the co-hosts themselves. During a political debate on the Wednesday (Jan. 25) show, Whoopi Goldberg and her View co-stars were interrupted by what can only be described as a fart sound. The flatulent interruption came at a rather inappropriate time as the panel discussed the recent discovery of classified documents in the home of former vice president Mike Pence. While they raised concerns about nuclear secrets floating around outside of the White House (as is rumored...
3 DAYS AGO
Showbiz Cheat Sheet

After 'Gunsmoke,' the actor faced health challenges that ultimately killed her. Here's Amanda Blake's cause of death and a possible reason why her friends said she died of throat cancer.
KANSAS STATE・1 DAY AGO
The Independent

When people accused me recently of criticising Prince Harry and Meghan Markle for “profiteering” from my grandfather’s name, I was shocked. Because it was false. I had never accused Harry and Meghan of doing this.Instead, I was misquoted, leading to global news coverage that weaponised my name – and the name of my grandfather, the late anti-apartheid activist and first president of South Africa, Nelson Mandela – to target a woman of colour.An Australian newspaper reported that I had accused Harry and Meghan of “using” my grandfather’s legacy for profit with their Netflix documentary series Live to Lead. They...
2 DAYS AGO
ETOnline.com

Marc Anthony and Nadia Ferreira have officially said "I do!" ET has confirmed that Anthony wed the Miss Universe contestant at the Perez Art Museum in Miami Saturday. The wedding featured a star-studded guest list which included David and Victoria Beckham and their kids Harper, Romeo and Cruz as well as Maluma, Romeo Santos, Louis Fonzi, Daddy Yankee, Lin Manuel Miranda, Anthony Ramos, Salma Hayek, Leah Remini and David Grutman. Anthony and his ex-wife, Jennifer Lopez's kids, Max and Emme, 15, were not in attendance.
MIAMI, FL・16 HOURS AGO
Decider.com

Jay Leno‘s 2022 troubles are carrying into the new year, After being hospitalized for injuring his face in a garage fire in November, the comedian broke two bones after falling off his motorcycle Jan. 17 – and now his future on NBC has been jeopardized. While chatting with...
2 DAYS AGO
News Breaking LIVE

The entertainment world is mourning the loss of one of their one as the star of several British hit movies and groundbreaking films has died at the age of 89, according to her family.
2 DAYS AGO
Decider.com

Todrick Hall has come under fire for suggesting the “toxic workplace” at The Ellen Degeneres Show could have factored into Stephen “tWitch” Boss‘s death. People close to late DJ and dancer, who died by suicide at age 40 late last year, are slamming Hall for his irresponsible claims, which he shared while hyping his new show, The Real Friends of WeHo.
2 DAYS AGO
Decider.com

Is this the light at the end of the tunnel? After months of drama, Good Morning America hosts Amy Robach and T.J. Holmes will reportedly engage in a mediation session with ABC later this week. Hopefully this will satisfy the network enough that viewers will be given answers about the two anchors’ future on the lunchtime talk show GMA3: What You Need to Know.
4 DAYS AGO
Decider.com

Whoopi Goldberg Loses It Over Mice Studies on ‘The View’: “How Do You Know The Mice Got Their Memory Back?!”

Whoopi Goldberg could hardly keep it together during a Hot Topics segment on today’s episode of The View. The longtime moderator couldn’t wrap her head around studies on mice memory, sending her into a full-on laugh attack. While the ladies ripped a recent news story about 45-year-old man for spending $2 million a year to get his 18-year-old body back, with Sara Haines slamming it as “vapid” and “stupid,” Sunny Hostin was the only host at the table to disagree with the overall consensus. “There’s this new mice study out that said that old mice can grow young again,” she explained. “What they...
3 DAYS AGO
Decider.com

Stream It Or Skip It: ‘Shotgun Wedding’ on Prime Video, Where J.Lo Blows Up The Guys Who Try To Blow Up Her Wedding

Audiences are either going to love or hate Shotgun Wedding, the new romantic comedy starring Jennifer Lopez and Josh Duhamel, which is out now on Prime Video. Lopez has cornered the rom-com market playing brides whose weddings are doomed, but Shotgun Wedding gives Lopez a chance to flex some action muscles too, and she proves she’s game for anything, no matter how ridiculous. For some, the ridiculousness could be too much to bear, but personally, I found it a delightful escape.
2 DAYS AGO
Decider.com

Stream It Or Skip It: ‘Lockwood & Co.’ On Netflix, About Ghost-Hunting Teens Who Try To Solve A Decades-Long Paranormal Invasion

Netflix has certainly cornered the market on paranormal-driven series. Their latest is based on a popular book series about teenage ghost-hunters that fight ghosts that actually kill people. LOCKWOOD & CO.: STREAM IT OR SKIP IT?. Opening Shot: An array of street lights flicker on as a car parks at...
2 DAYS AGO
Decider.com

After nearly two months of rumors, Good Morning America hosts Amy Robach and T.J. Holmes have been booted from ABC following their mediation session with the network earlier this week. The two hosted the lunchtime program GMA3: What You Need To Know alongside Dr. Jennifer Ashton before their extramarital affair was exposed and ABC quickly removed them from the air.
2 DAYS AGO
Decider.com

Emma Roberts Adds Fuel to the Rumors That Lea Michele Can’t Read During ‘WWHL’ Appearance: “We’ve Never Been in a Book Club Together”

Emma Roberts is joining in on the collective joked that her Scream Queens costar and real-life friend Lea Michele possibly can’t read. Earlier this week, the actor made an appearance on Watch What Happens Live with Andy Cohen where she was asked about the controversial Glee alum and gave an eyebrow-raising answer. Roberts was asked by a WWHL guest about Michele’s performance in Broadway’s Funny Girl. When the caller asked about the biggest misconception people have about Michele, Roberts gushed about seeing her onstage, saying, “I was crying at the end. I literally – She looked at me and I said...
3 DAYS AGO
Decider.com

The Percy Jackson cast is expanding! It has been announced that Lance Reddick and Toby Stephens have joined the cast of the upcoming live-action Disney+ series, Percy Jackson and the Olympians. The news was shared on the show’s Twitter account, which stated that Reddick and Stephens will star as Zeus...
3 DAYS AGO
TheWrap

The ”Real Time“ comedian admits he flies private, “And so does every other person who calls themselves an ‘environmentalist’ who can!”. Bill Maher has a beef with celebrities like Leonardo DiCaprio, Brad Pitt, Beyonce and many others who preach the need for changes to address the environmental crisis while also using one of the worst contributors to the problem – emissions-spewing private jets.
1 DAY AGO
Decider.com

Stream It Or Skip It: ‘The 1619 Project’ On Hulu, A Docuseries Based On Nikole Hannah-Jones’ New York Times Series On Black History In The U.S.

Nikole Hannah-Jones, the journalist that won a Pulitzer Prize for “The 1619 Project” in The New York Times, produces and narrates the docuseries based on that print series. In The 1619 Project, Hannah-Jones explores the parts of Black history in the U.S. that have been generally unexamined or underreported, especially to the white majority, and how that’s fed into the institutional racism that permeates the nation to this day.
IOWA STATE・3 DAYS AGO
Decider.com

Stream It Or Skip It: ‘M3GAN’ on VOD, a Screamingly Funny A.I.-Horror Satire

M3GAN (now on VOD streaming services like Amazon Prime Video) is a horror-comedy co-produced by genre masters James Wan (who has story credit) and Jason “Blumhouse” Blum. It’s the story of a murder-doll-bot that’s part Chucky, part Terminator, not enough Monster of Frankenstein, starring Allison Williams, perhaps best known for memorably, loudly crunching on dry Froot Loops in Get Out. The movie rode its meme-heavy marketing campaign to $127 million worldwide at the box office, exceptional for a January release. And I know it’s stupidly early, but it’ll be tough to find a movie in 2023 that’ll make me laugh more than this.
MICHIGAN STATE・4 DAYS AGO