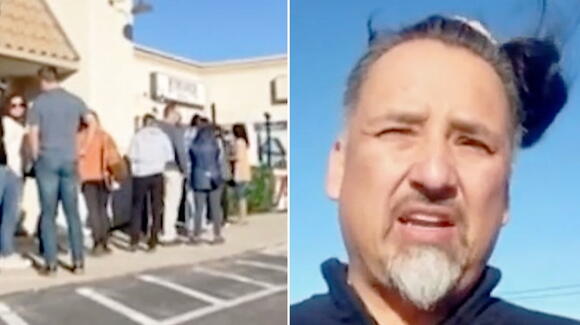 A US Army veteran who tackled a mass shooter inside a Colorado Springs LGBT + club has been “overwhelmed” with support at his family’s brewery in the wake of the massacre.

The family’s Atrevida Beer Company reopened on 25 November after its closure throughout the week in the wake of a mass shooting inside Club Q on 19 November, killing five people and injuring 18 others.

Richard Fierro was inside the club celebrating a birthday with family and friends, including his daughter Kassandra and her boyfriend, 22-year-old Raymond Green Vance. Vance was among the five people who were fatally shot that night.

Lines formed out the door of the brewery over the weekend and the family has been flooded with requests for T-shirts. A GoFundMe to support Vance’s family has raised more than $32,000.

On Thanksgiving, Mr Fierro and his wife Jessica posted an emotional video from the family’s brewery thanking the community for the “outpouring of love” and support in the wake of the shooting.

“Our hearts are with everyone who was part of the incident that night,” Ms Fierro said.

“This is a life-changing event, [for] everyone in the building and their families and their friends,” Mr Fierro told CNN on 27 November.

President Joe Biden also called Mr Fierro last week to thank him “for his bravery and for his just instinct to act and the ability by him doing that saving, saving, maybe dozens of lives,” according to White House press secretary Karine Jean-Pierre.

“I’m not a hero,” Mr Fierro told CNN . “Everyone else in that room was a hero with us and everybody’s got a hero story to just try and survive.” He said he was humbled to see crowds of people from across the state who visited the brewery and tried to thank “everyone who walked through that door.”

“It was more beautiful as a person to see the variance, the difference, the diversity, the inclusion of everyone there,” he said. “Everybody in the same room, just having some joy and enjoying a beer.”

Another man, US Navy Petty Officer 2nd Class Thomas James, pushed a rifle away from the shooter while Mr Fierro struck him with the shooter’s handgun.

In a statement from Centura Penrose Hospital, where Mr James remains hospitalised, he said he “simply wanted to save the family I found.”

“If I had my way, I would shield everyone I could from the nonsensical acts of hate in the world, but I am only one person,” he added. “Thankfully, we are family, and family looks after one another. We came a long way from Stonewall. Bullies aren’t invincible.”

Mr James is in stable condition. Another victim is in critical condition.

“To the youth I say be brave,” Mr James said. “Your family is out there. You are loved and valued. So, when you come out of the closet, come out swinging.”

See...what if...he bashed dude with several knee and elbow shots to the dome? Would he be in trouble? America really needs to think about that.

A “fidgety” Alex Murdaugh showed up at his sick mother’s house for a brief 20-minute visit on the night of his wife and son’s murders – before later claiming he was there double the length of time and offering to pay towards the wedding of the caretaker who could refute his alibi. Muschelle “Shelly” Smith, who had been working as a caregiver to Mr Murdaugh’s mother Libby from October 2019, gave emotional and at-times damning testimony in Colleton County Courthouse in Walterboro, South Carolina, on Monday.Ms Smith told jurors about Mr Murdaugh’s unusual behaviour both on the night of...
SOUTH CAROLINA STATE・2 DAYS AGO
The Independent

Two children who were missing for nearly a year after allegedly being kidnapped by their mother are “still in shock” a week after authorities found them in a supermarket, according to their father.Blake Gilley, 38, told NBC News that his 12-year-old son Adrian and 11-year-old daughter Brooke had been kept out of school and discouraged from interacting with anyone in the 11 months since they vanished. “It is an understatement to say I was terrified and freaked out,” Mr Gilley told NBC News after an emotional reunion with the children last week. Adrian and Brooke were reported missing from...
LIBERTY, MO・1 DAY AGO
The Independent

New images of Gabby Petito show the 22-year-old’s face covered in blood and bruises after a domestic abuse incident that occurred during her ultimately fatal road trip with ex-fiancé Brian Laundrie.The images were released by attorneys for Petito’s family and were pulled off of her phone.The attorneys first noted the photo’s existence in a wrongful death lawsuit against the Moab City Police Department. An officer from the department encountered the couple on 12 August, 2021, after a witness saw them fighting and called to report the incident.Petito was murdered during the couple’s road trip. A notebook found with Laundrie’s...
MOAB, UT・1 DAY AGO
The Independent

Four people and a dog have been injured in an alleged attack by other dogs on a busy beach at the weekend.Marie Hay took her Siberian Husky, Naevia, to the busy Redcar beach near Middlesborough on Sunday afternoon along with two of her daughters.But two dogs allegedly approached Naevia and jumped on her in an unprovoked attack at around 3pm.Three women and one man had to be treated in hospital for their injuries, and Naevia has also been left needing treatment.Ms Hay says she’s now facing a £14,000 vets bill to save the life of her Husky following the attack.The...
13 HOURS AGO
The Independent

The former firefighter and veteran of 9/11 who is set to be the guest of embattled New York Republican George Santos at Joe Biden’s State of the Union address has admitted he is wary of being “sullied” by the congressman’s lies.Mr Santos - still facing multiple investigations over a series of lies he is alleged to have told about his background - will be accompanied by Michael Weinstock, a lawyer who served as a volunteer firefighter in the Big Apple between 1990 and 2001 and is understood to have helped rescue people trapped under rubble at Ground Zero after...
WASHINGTON STATE・1 DAY AGO
The Independent

Arizona rancher held on $1M bond in killing near US border

A rancher who lives near Arizona's border with Mexico is being held on a charge of first-degree murder in last week’s fatal shooting of a man tentatively identified as a Mexican citizen. His bail was set at $1 million. The Santa Cruz County Sheriff's office in Nogales, Arizona, confirmed Monday that George Alan Kelly, 73, was arrested last week in the killing. Authorities believe the victim was Gabriel Cuen-Butimea, 48, who lived just south of the border in Nogales, Mexico, because of a Mexican voter registration card he carried.The killing occurred Jan. 30 in the Kino Springs area just...
NOGALES, AZ・2 DAYS AGO
The Independent

Alex Murdaugh's paralegal testified Wednesday at his double murder trial about the betrayal she felt when she discovered he lied and manipulated to steal millions of dollars from clients.But Annette Griswold also told jurors Murdaugh was a dedicated family man so distraught after his wife and son were killed he could no longer stay at the home where the killings took place and texted a lengthy apology for his misdeeds to his paralegals while in rehab.The disgraced lawyer, 54, is standing trial in the shootings of his 52-year-old wife, Maggie, and 22-year-old son, Paul, on June 7, 2021, near kennels...
HAMPTON COUNTY, SC・11 HOURS AGO
The Independent

A community group will offer self-defence classes after a Black schoolgirl was attacked by a gang in Surrey.Demonstrations took place outside Thomas Knyvett College in Ashford on Wednesday afternoon and The Independent understands this prompted staff members to end the day earlier than usual.Around 200 attendees assembled nearby the college in a demonstration arranged by a community activist, known as Raspect, from a grassroots collective called Forever Family.Five people have been arrested in connection with the attack, which took place on Monday.Click here to sign up for our newsletters. Read More Epsom College headteacher found dead in school with husband and daughter‘Mindless’ vandalism of 5,000-year-old Irish monument condemnedMother of Archie Battersbee tells online trolls to ‘get a life’
8 HOURS AGO
The Independent

Jury may not hear cops' admissions in Tyre Nichols’ beating

It was a stunning revelation: One of the officers involved in the fatal beating of Tyre Nichols took a cellphone photo of the bloodied and handcuffed man and shared it with five other people.The disclosure was part of the Memphis Police Department's request to the state that the five former officers charged with murder in Nichols' death be decertified. But the officer's statement about sharing the photo will likely never be seen by a jury. So-called “Garrity statements” — or disclosures made by police officers during internal investigations under the threat of termination if they stay silent — have been...
MEMPHIS, TX・8 HOURS AGO
The Independent

A former University of Connecticut student pleaded guilty to murder and other charges Wednesday for killing a man and severely wounding another with a sword in 2020 — one of two deadly attacks that led to a six-day manhunt in several states that ended with his capture in Maryland.Peter Manfredonia, 26, from Newtown, Connecticut, agreed to a 55-year prison sentence during a hearing at Rockville Superior Court. Sentencing was set for April 20. He also is expected to plead guilty in connection with the second attack next week in state court in Milford, his lawyer said.Manfredonia answered questions from...
NEWTOWN, CT・8 HOURS AGO
The Independent

Arizona rancher, 73, charged with murder for shooting Mexican citizen on his property near border

A rancher who lives near Arizona's border with Mexico is being held on a charge of first-degree murder in last week’s fatal shooting of a man tentatively identified as a Mexican citizen. His bail was set at $1 million. The Santa Cruz County Sheriff's office in Nogales, Arizona, confirmed Monday that George Alan Kelly, 73, was arrested last week in the killing. Authorities believe the victim was Gabriel Cuen-Butimea, 48, who lived just south of the border in Nogales, Mexico, because of a Mexican voter registration card he carried.The killing occurred on 30 January in the Kino Springs area...
NOGALES, AZ・1 DAY AGO
The Independent

2 US Army veterans deported to Mexico win US citizenship

After fighting in Afghanistan, former U.S. Army soldier Mauricio Hernandez Mata returned home with post-traumatic stress, which he says eventually led to getting in trouble with the law and being deported to Mexico — a country he had not lived in since he was a boy.On Wednesday, he and another deported veteran were sworn in as U.S. citizens at a special naturalization ceremony in San Diego. The two veterans were among 65 who have been allowed back into the United States over the past year ago as part of a growing effort by the Biden administration called the Immigrant...
SAN DIEGO, CA・7 HOURS AGO