Congress Is Still Too Old And Too White. Send Help. 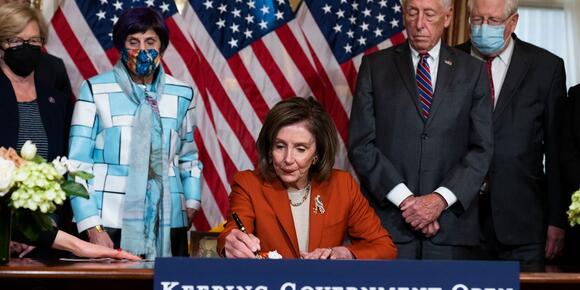 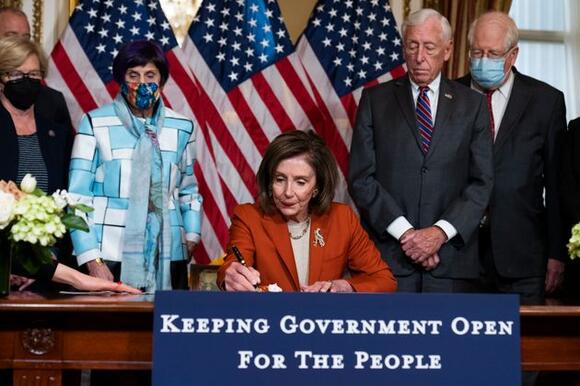 Speaker of the House Nancy Pelosi (D-Calif.) conducts a bill enrollment ceremony for the Further Extending Government Funding Act in the U.S. Capitol on Dec. 3, 2021.

At long last, at least one chamber of Congress is going to look a lot less older.

After leading Democrats in the House of Representatives for almost 20 years, Speaker Nancy Pelosi (Calif.), at the age of 82, declared in a speech last week that it was time for a “new generation” to lead when the new Congress convenes in January.

Pelosi, who is the first woman to wield the speaker’s gavel, announced last Thursday that while she will remain in Congress as the representative from San Francisco, she will step aside from a leadership role — notably in the aftermath of the violent attack on her husband, Paul, at their San Francisco home in October.

Delivering remarks from the House floor, she said, “Now we must move boldly into the future. The hour has come for a new generation.”

Additionally, Pelosi’s No. 2, the 83-year-old House Majority Leader Steny Hoyer (Md.), said he will follow in Pelosi’s move and step down in order to make way for new leadership — writing in a letter to Democrats that while he is proud of the work he’s done, “now is the time for a new generation of leaders.” However, House Majority Whip Jim Clyburn (S.C.), 82, said on Sunday that he intends to remain in leadership, but said he looked forward to assisting “our new generation of Democratic Leaders.”

That new generation is all but certain to include Reps. Hakeem Jeffries (N.Y.), current chair of the House Democratic Caucus, Katherine Clark (Mass.) and Pete Aguilar (Calif.).

Considering some of the longstanding calls for a leadership shift from the 80-something trio, this is welcomed news to those who love our elders, but nevertheless don’t want only older people ruling over us. With all due respect to Nancy Pelosi and all she has achieved, this is a long time coming.

We already have an 80-year-old president. Must octogenarians control all levels of government? As New York Times columnist Jamelle Bouie wrote earlier this year , the older politicians in control have lacked “any sense of urgency and crisis — any sense that our system is on the brink.”

The new Democratic leadership may not be as young as some of us would still prefer, but it is a necessary move given we live under the oldest government in history .

Unfortunately, this generational shift, while still notable, obscures the reality that when it comes to diversifying generational representation in Congress, both houses still have a long way to go — one chamber in particular far more than the other.

The average age of House members at the beginning of the 117th Congress was 58.4 years. For U.S. Senators, it was 64.3 years. Presently, nearly a quarter of Congress is over the age of 70 — the highest percentage ever.

The upcoming 118th Congress will at least greet its first member of Generation Z, 25-year-old Maxwell Frost of Florida, but that result is a feat that can’t be understated. Only twice has a 25-year-old been elected to Congress — Republican Madison Cawthorn in 2020 and Democrat Thomas Downey in 1974, according to The New York Times . Ideally, the House will increasingly include more members that are not white, old, male and straight.

In the case of the Senate, though, the majority of the members are older and white — and the unfortunate defeat of Mandela Barnes in Wisconsin’s recent senatorial contest against incumbent Ron Johnson means this is unlikely to change for several more years.

As of July 1, 2019, millennials have surpassed baby boomers as the nation’s largest living adult generation, according to population estimates from the Census Bureau, but Georgia Sen. Jon Ossoff is the lone millennial serving in the Senate.

Ossoff, who defeated David Perdue for a Georgia seat last January at age 33, is the youngest Democrat elected to the Senate since 1973 , when then-Sen. Joe Biden joined the legislative body as a 30-year-old.

Much as I think Ossoff has served well thus far, even he can attest that in spite of having a wide range of real-life experience, he came from a privileged background typical of a U.S. senator. By comparison, the 35-year-old Barnes has led a life that mirrors the reality of many millennials — a generation that’s faced harsh economic anxiety and genuine fears of being the first generation to not do better than their parents. For example, he completed his college degree 12 years after he started school, dealt with delinquent taxes, and was on Wisconsin’s Medicaid program when he ran for lieutenant governor in 2018.

As a millennial who deeply understands the harsh realities of economic mobility in America, I’ve long been frustrated by our leaders being too far removed from the experiences of real Americans.

Barnes spoke to those realities in his campaign, which is why I hoped for his victory.

Like Milwaukee-based reporter Dan Shafter wrote before the election about Barnes’ candidacy, “A victory for a young Black millennial politician, in this of all states, could be a sign that a generational shift in American politics is well on its way.”

I fault racism for Barnes’ close defeat, though it is my hope that he and others like him not only run again, but are actively recruited. Not because I think we should throw older politicians away. There is much value in what we can glean from our elders.

But there has to be a point when a politician understands when it’s time to let go and move on, and for far too long, not enough of our political leaders have displayed a willingness to step aside and let others take over. The American people deserve better than a Congress this old and this white.

The Senate minority leader previously said he had no hard feelings toward the men, but his actions said otherwise.
UTAH STATE・8 HOURS AGO
HuffPost

While Ron DeSantis Is Fighting Culture Wars, Millions Of Floridians Are Losing Their Health Care

CLAIM: House Republicans are requiring Rep. Jamie Raskin, a Democrat from Maryland, to remove the headwear he’s donned on the House floor while undergoing chemotherapy. AP’S ASSESSMENT: False. Republicans have made no such request and have in fact been nothing but supportive, a spokesperson for Raskin told The Associated Press.
MARYLAND STATE・21 HOURS AGO
HuffPost

House Democrat Slams Jim Jordan's Tyre Nichols Remark: It's 'Not A Phase' For Him

Maxwell Frost’s comment isn’t the only time that the newly elected congressman, the first from Gen Z, has criticized Republicans.
MEMPHIS, TN・21 HOURS AGO
RadarOnline

Democratic House Rep. Maxine Waters came under fire this week after it was revealed her daughter was paid more than $192k in campaign funds to run the congresswoman’s “slate mailer” operation, RadarOnline.com has learned.Waters’ daughter Karen reportedly earned $192,300 between January 2021 and December 2022 for running her mother’s operation that sees the 84-year-old California congresswoman endorse candidates and ballot measures via political advertisements that are then mailed en masse to residents throughout the state.According to Daily Mail, Waters also received payments for appearing on the slate mailers and her daughter has reportedly collected more than $1.2 million since the...
CALIFORNIA STATE・1 DAY AGO
Business Insider

McKay Coppins, a journalist at The Atlantic, said he was "taken aback" by how often he heard MAGA Republicans say they wish Trump was dead.
MICHIGAN STATE・1 DAY AGO
HuffPost

Boris Johnson Reveals What ‘Horrified’ Him After Meeting Republicans In DC

The former British prime minister said it seems like Republicans are "frightened of a guy called Tucker Carlson."
1 DAY AGO
HuffPost

GOP Rep. Who Spoke At Pro-Hitler Event Goes After Ilhan Omar Because Of ‘Anti-Semitism’

Mike Lindell, once photographed at Trump’s White House holding a document discussing “martial law,” is being welcomed by the RNC for his marketing expertise.
TENNESSEE STATE・3 DAYS AGO
HuffPost

Jimmy Fallon Rips Ron DeSantis With A Trumpy Slogan For 2024

The "Tonight Show" host had some suggestions for Florida's Republican governor.
FLORIDA STATE・2 DAYS AGO
Newsweek

"There is no other way to talk to these fools," State Duma member and former military commander Andrey Gurulyov said.
3 DAYS AGO
HuffPost

The coup-attempting former president saw no real bump from his campaign announcement, and did not raise much more than he did from his NFT sale.
IOWA STATE・1 DAY AGO
HuffPost

It wasn’t a great moment for Charnelle Bjelkengren. It's also nothing compared to all the unqualified judges Republicans confirmed under Trump.
WASHINGTON STATE・2 DAYS AGO
HuffPost

It's even worse than it sounds.
MEMPHIS, TN・1 DAY AGO
HuffPost

The California Democrat hit back after the Texas Republican seemed to imply that gun laws don't work.
CALIFORNIA STATE・2 DAYS AGO
HuffPost

The New York Republican has been under scrutiny for a long series of apparent lies about his background and campaign finances.
2 DAYS AGO
HuffPost

“I was taken aback by how often I heard this,” McKay Coppins said on CNN.
2 DAYS AGO
HuffPost

"We need to get our numbers up," the gun-loving lawmaker said.
COLORADO STATE・23 HOURS AGO