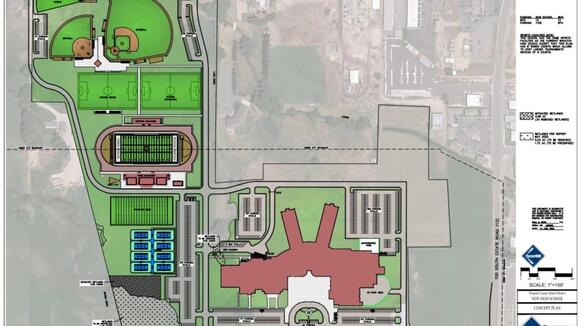 The proposed annexation would bring in roughly 45 acres to Heber City limits, which would allow the property to receive services from the city, such as water and sewer lines. The property is located across Midway Lane from Southfield Park, at 100 North 900 west, currently in unincorporated Wasatch County.

Wasatch County School District is the primary landowner, and they hope to start construction on a new high school as early as this spring. While the proposal has received some pushback from the public, the annexation has already been approved by the Heber City planning commission.

Public comment is welcome and can be delivered in person, via the virtual link found on Heber City’s website , or emailed to CCPublic@heberut.gov .

HEBER CITY, Utah — A medical helicopter arrived to aid in a four-vehicle crash on US 40, mile marker 13 in Heber City. The crash affected both directions of traffic. […]
HEBER CITY, UT・19 HOURS AGO
TownLift

Why glass is recycled separately in Park City

SUMMIT COUNTY, Utah — Visitors and new Park City transplants are often vexed when they learn that throwing glass in with other recyclables is a no-no. Recycle Utah, Park City […]
PARK CITY, UT・5 DAYS AGO
TownLift

HEBER CITY, Utah — Within the prominent Victory Ranch community perched on the front of the hill, this rarely available Aspen model cabin is one of five that awaits to […]
PARK CITY, UT・2 DAYS AGO
TownLift

SALT LAKE CITY— A herd of elk caused quite a stir this morning as they crossed Salt Lake County’s east bench. Traffic was delayed on all roads near the I-215/I-80 […]
SALT LAKE COUNTY, UT・6 DAYS AGO
TownLift

PARK CITY, Utah — When heading out into the backcountry or through the gates at a resort, it’s easy to follow the checklist of beacon, probe, shovel, warm clothing, etc., […]
PARK CITY, UT・20 HOURS AGO
TownLift

Beyond the Frontlines: the Smith family

PARK CITY, Utah — Peter and Victoria Smith were born travelers, and their two daughters didn’t have much choice either genetically or situationally but to become avid travelers too. Peter’s […]
PARK CITY, UT・18 HOURS AGO
TownLift

Jobs of the week, February 1

PARK CITY, Utah — Deer Valley Resort announced today that it will unveil its new Burns Express chairlift at a ribbon-cutting ceremony on Friday, February 3. According to a press […]
PARK CITY, UT・6 DAYS AGO
TownLift

PARK CITY, Utah — In a tucked away location in Kimball Junction, is Hana Ramen, which opened just over a year ago by ramen enthusiast turned-professional Mike Harrison. Now, on […]
PARK CITY, UT・6 DAYS AGO