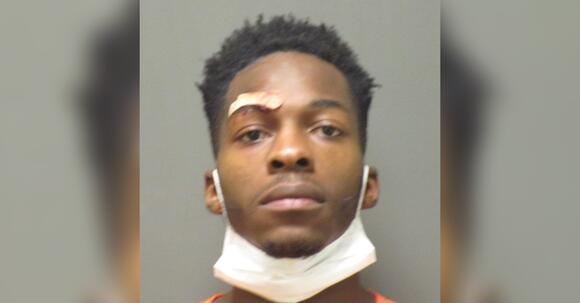 CLEVELAND (WJW) — A man has been charged after police reports say he was shot with his own gun during a robbery at a Target parking lot last Wednesday.

Antwan Pryor, 20, faces a charge of aggravated robbery in the case.

The shooting happened in the Target parking lot located at 3100 West 117 Street.

When officers arrived at the scene, medics were there treating Pryor for a gunshot wound to his midsection.

Police were told Pryor and the victim were communicating for a few days. They both agreed to meet in the Target parking lot so Pryor could buy an iPhone from the victim, police reports state.

Pryor got out of his car and got into the passenger seat of the victim’s vehicle, the victim told police. That is when they began talking about the sale. At some point during the conversation, Pryor allegedly took out a gun and pointed it at the victim, according to police reports.

The victim said Pryor then told him to give him all of “his stuff.” He then took the phones and the victim’s wallet, the victim told the police.

The victim, fearing that he was going to be shot, grabbed the gun and tried to get it away from Pryor, police were told. The two men fought over the gun. It was turned toward Pryor and went off, police reports state.

Police said Pryor was in stable condition when he was taken to the hospital.

hey a broygotta do what he had to do to save his own life...and the robber got what he was going to do to the victim. . these days these people will kill you for no reason at all .I'm glad that the robber survived so maybe he will be able to tell his story to other young men that's out there doing the same thing he was doing and I'm quite sure many have also lost their lives doing the wrong things to people people are not playing either they work hard everyday to put food on their table and whatever else and for anyone to just feel like you can just walk up and threaten someone life. you better think twice because don't never think your going to keep getting away for all the wrong you did to innocent people

Gods Plan 🙏🏽 He’s probably has been robbing ppl all his life. ALL GOOD THINGS COME TO AN END ONE WAY OR ANOTHA… GAME OVA!!! Sometimes you have to find that out “KARMA~WAY!”

A McDonald's employee faces charges after investigators say he intentionally set two fires at the restaurant in Westlake.
WESTLAKE, OH・4 HOURS AGO
WDTN

Police are looking for three suspects after thousands of dollars in jewelry was stolen from the Great Northern Mall Friday morning.
NORTH OLMSTED, OH・4 HOURS AGO
WDTN

A man accused of shooting five people inside a Mack Court home is alleged to have called his ex-girlfriend admitting to the crime.
CLEVELAND, OH・2 DAYS AGO
WDTN

The body of a missing man was found in Lake Erie Monday.
CLEVELAND, OH・4 HOURS AGO
WDTN

Man dies after being run over by snow plow

A man is dead after being hit by a snowplow Monday morning.
ORWELL, OH・4 HOURS AGO
WDTN

A house fire was reported at a South Arch Avenue home just before 12:30 p.m. Thursday.
ALLIANCE, OH・2 DAYS AGO
WDTN

A wood board went through the windshield of a truck driving on Interstate 90 in Avon after it fell out of a truck on January 20.
AVON, OH・2 DAYS AGO
WDTN

A Croatian immigrant living in Parma Heights is charged in the U.S. with war crimes from the 1990s, while he was allegedly a Serbian army operative, according to a federal indictment unsealed Thursday.
PARMA HEIGHTS, OH・2 DAYS AGO
WDTN

Ohio couple who survived Blizzard of ’78 discuss their ordeal

Light snow is falling outside of David and Sandy Tarzanick’s Seven Hills home. The flurries in late January sharply remind them of 1978 and the blizzard that almost killed them.
SEVEN HILLS, OH・2 DAYS AGO
WDTN

If approved, the city would donate $1.9 million from its more than $511 million in American Rescue Plan coronavirus relief funding to RIP Medical Debt, a national nonprofit that uses donations to buy up medical debt in large bundles "for pennies on the dollar," then wipe it, according to a Monday news release.
CLEVELAND, OH・9 HOURS AGO
WDTN

‘Not anything new’: Vigil held to remember Tyre Nichols

Nichol's death at the hands of Memphis police has been viewed by millions and has sparked nationwide outrage.
CLEVELAND, OH・11 HOURS AGO
WDTN

Local authorities hope someone can help identify an individual or individuals responsible for a tremendous amount of damage done to multiple soccer and baseball fields.
CUYAHOGA FALLS, OH・2 DAYS AGO
WDTN

How new Ohio voting laws will affect the May primary election

In almost three weeks since Ohio Gov. Mike DeWine signed new voting restrictions into law, local boards of elections are coming to realize what these changes will mean for voters.
OHIO STATE・2 DAYS AGO
WDTN

‘Thank you, John’: Guardians honor man whose drum was heartbeat of Cleveland baseball

The Cleveland Guardians paid tribute to the superfan whose bass drum was the heartbeat of Cleveland baseball for nearly a half-century.
CLEVELAND, OH・4 HOURS AGO
WDTN

The 34-year-old spent the 2022 season with the Pirates but appeared in just 21 games due to injury. He batted .233 with two home runs and eight RBIs for the Pirates.
PITTSBURGH, PA・9 HOURS AGO
WDTN