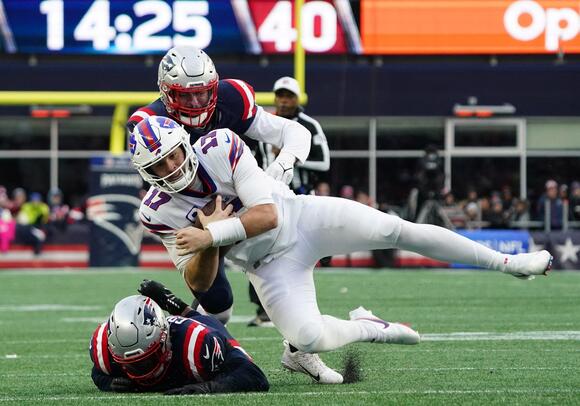 The New England Patriots are rarely home underdogs during the Bill Belichick era, so when they are, people take notice. Especially when it’s a number this size.

Odds for the NFL Week 13 slate were released Sunday, and the Patriots opened as 5.5-point underdogs to the visiting Buffalo Bills for Thursday Night Football. The Bills are currently two games better in the AFC East, 8-3, while the Patriots are in last place with a 6-5 mark. The Bills have also won four of the teams' last five meetings, the past two by an average margin of victory of 21 points. Plus the Bills didn’t punt in either of those games. Suffice to say, Vegas has confidence they can move the ball and score against New England as this represents an almost nine-point swing from the classic three-point favorite for being the home team.

It will be interesting to see and hear commentary from Pats players about this, and if said spread is used as a disrespect card this week. Players haven’t forgotten the lopsided nature to this rivalry of late, and it’s been a motivating factor all offseason, as evidenced by the photo seen this summer in Mac Jones’ locker of him walking off the field in defeat last January .

For the record: since taking over in New England in the 2000 season, this will be the 21st time the Pats will be home underdogs under coach Bill Belichick. They’re 15-5 against the spread in those games, with 14 of them QB’d by Tom Brady (in which he was 12-2 ATS), thus they’re 3-3 without Brady following their 37-26 loss to the Ravens in September (Baltimore was -3 at kickoff).

The drama is building for the latest chapter in this heated division rivalry. Bills at Patriots kicks off Thursday night at 8:15 p.m. on Amazon Prime Video.

Former Patriots running back LeGarrette Blount has some stories about Bill Belichick holding Tom Brady’s feet to the fire during his team in New England.
FOXBOROUGH, MA・8 HOURS AGO
WEEI Sports Radio

Jonathan Jones says he 'hopes' he can stay with the Patriots

Jonathan Jones will be a free agent this offseason. In a recent interview with NBC Sports Boston, the defensive back expresses his desire to re-sign with the New England Patriots.
2 DAYS AGO
WEEI Sports Radio

The Patriots need to upgrade at both receiver and tackle this off-season. But one of those positions is more valuable than the other for New England and quarterback Mac Jones.
1 DAY AGO
WEEI Sports Radio

Twice passed over for the Patriots top offensive assistant job, New England has now lost tight ends coach Nick Caley to Sean McVay’s Rams. This adds yet another layer to the changes to the offensive coaching staff under Bill Belichick this winter.
ALABAMA STATE・2 DAYS AGO
WEEI Sports Radio

The biggest long-term question surrounding the Patriots continues to be who will take over for Bill Belichick. NBC Sports Boston’s Tom Curran believes Jerod Mayo will be his successor.
11 HOURS AGO
WEEI Sports Radio

Is Peter Skoronski the type of NFL-ready prospect Patriots love?

Whether he’s a guard or a tackle, Peter Skoronski will probably be a Week 1 starter somewhere. Will the Patriots be the team that takes a chance on him as a tackle?
10 HOURS AGO
WEEI Sports Radio

Once and for all, Brady pushes back on the narrative about his 'rift' with Belichick

The defining narrative of Tom Brady’s final seasons with the New England Patriots was his supposed rift with Bill Belichick. On the latest edition of his “Let’s Go!” podcast, Brady pushes back on it.
1 DAY AGO
WEEI Sports Radio

Mac Jones’ future in New England is certainly debatable. Heading into his third NFL season the former first-round pick needs to prove he’s a worthy franchise QB. But adding another big-name QB to the competition in New England would not help.
FOXBOROUGH, MA・2 DAYS AGO
WEEI Sports Radio

Despite some suggestions from others that Tom Brady might not want to sign a one-day contract with the Patriots, team owner Robert Kraft is doubling down on the idea and clearly wants to make it happen.
FOXBOROUGH, MA・13 HOURS AGO
WEEI Sports Radio

Patriots were reportedly all over Zay Flowers during Shrine Bowl

The Patriots weren’t alone in their pursuit of Zay Flowers at the Shrine Bowl in Las Vegas. But they might have gotten a closer look than any at the prospect everyone wanted a piece of.
15 HOURS AGO