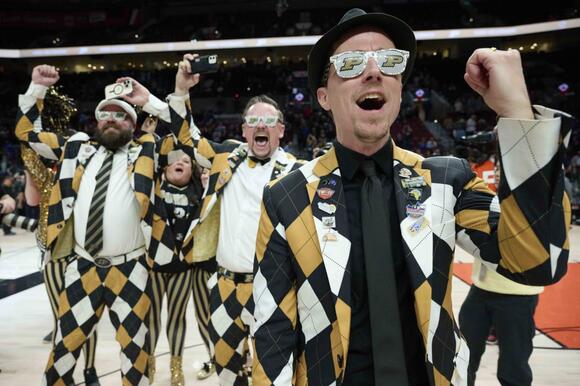 Seth Davis, the respected college basketball voice at CBS Sports and The Athletic, released his top-25 basketball poll on Monday morning, and it will have Indiana fans doing a serious burn. Like real serious on the disrespect scale, with a big dash of Purdue hatred tossed in, too.

BLOOMINGTON, Ind. — You know that line about opinions, right? How, like something else, everyone has one. Well, that certainly applies when it comes to college basketball polls during the first few weeks of the season.

Well, if you want to get your blood boiling on a Monday morning, check out Seth Davis' poll that he posted on Twitter early Monday. Davis is a well-respected college hoops reporter for CBS Sports, and a senior college basketball writer for The Athletic. He's also written several books that are very good, including "Wooden: A Coach's Life.''

At present, he also has zero respect for Indiana, ranking them at No. 16, far below the norm in most national polls. And he has Purdue, Indiana's bitter in-state rival, ranked No. 1

Spit your coffee out yet?

Indiana was No. 11 in both the Associated Press and Coaches Poll last week, and the 6-0 Hoosiers will probably move up a few spots when the newest poll is released at Noon ET on Monday.

Purdue is getting a lot of love this week, and with good reason, after beating West Virginia, No. 6 Gonzaga and No. 8 Duke out in Portland, Ore., in the Phil Knight Invitational. They Boilermakers started the season unranked in the Associated Press top-25 poll — technically they were 29th — and moved into the poll last week, checking in at No. 24.

The Boilermakers are 6-0 and sure to jump way up the poll this week. Indiana has been the highest ranked Big Ten team all season so far, and even at 6-0 themselves, it'll be interesting if Purdue passes them this week.

Purdue center Zach Edey and Indiana's Trayce Jackson-Davis are two of the best players in college basketball, but there are some folks who think they can't play in the NBA someday. Indiana coach Mike Woodson thinks that's foolish.
WEST LAFAYETTE, IN・8 HOURS AGO
HoosiersNow

Mike Woodson has been around the Indiana-Purdue rivalry as a high school recruit, college athlete and now as the Hoosiers' coach. Ahead of Saturday's game, Woodson shared stories and thoughts on the history of the rivalry.
WEST LAFAYETTE, IN・21 HOURS AGO
HoosiersNow

Indiana will have to knock down shots, but Mike Woodson knows the Hoosiers need to be at their best on the defensive end to contain Zach Edey in the middle and Purdue's variety of 3-point shooters.
WEST LAFAYETTE, IN・3 HOURS AGO
HoosiersNow

Ahead of Indiana's matchup with No. 1 Purdue on Saturday at Assembly Hall, coach Mike Woodson commented on the injury status of Xavier Johnson, Jordan Geronimo and Logan Duncomb.
BLOOMINGTON, IN・1 DAY AGO
HoosiersNow

Indiana lost at Maryland on Tuesday and Purdue protected home court on Wednesday against Penn State, setting up Saturday's rivalry game at Assembly Hall. I was at Mackey Arena on Wednesday, and here are some quick thoughts and concerns for the Hoosiers prior to their matchup against the nation's No. 1 team.
BLOOMINGTON, IN・1 DAY AGO
HoosiersNow

Indiana is in the running for Dylan Harper, a top-five player in the class of 2024 and the younger brother of former Rutgers' All-Big Ten player Ron Harper Jr.
BLOOMINGTON, IN・2 DAYS AGO
HoosiersNow

Indiana freshman guard Jalen Hood-Schifino had a rough night, going just 1-for-14 from the field and missing his first 11 shots in a 66-55 loss to Maryland in College Park. The points total was the second-lowest of the year and snapped the Hoosiers' five-game winning streak.
BLOOMINGTON, IN・2 DAYS AGO
HoosiersNow

Indiana coach Mike Woodson met with the media after Tuesday night's loss to Maryland, which ended a five-game winning streak. Here's the full video of his press conference, plus the transcript to read.
BLOOMINGTON, IN・2 DAYS AGO