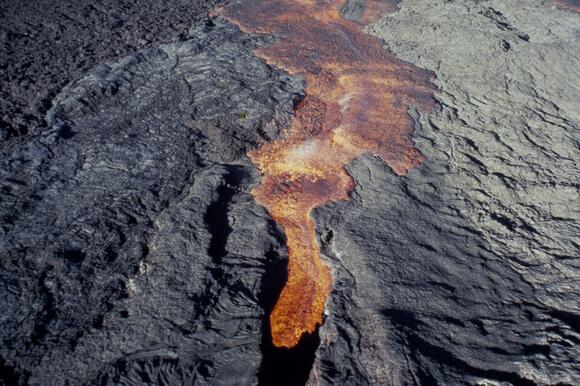 Hawaii officials issued an emergency alert around 11:30 p.m. local time on Sunday, warning that a volcanic eruption had been detected inside Hawaii Volcanoes National Park near the summit caldera of Mauna Loa. Officials warned the eruption could cause volcanic gas and ash to be carried by the winds but confirmed that “lava flows are contained within the summit area and are not threatening downslope communities.”

“Residents at risk from Mauna Loa lava flows should review preparedness and refer to Hawai‘i County Civil Defense information for further guidance,” the U.S. Geological Survey said in its warning to residents. “Based on past events, the early stages of a Mauna Loa eruption can be very dynamic and the location and advance of lava flows can change rapidly.”

The eruption comes after the active volcano was put into a “state of heightened unrest” due to a magnitude 5.0 earthquake that hit in mid-October. Although the volcano did not erupt in the immediate aftermath of the earthquake, it’s unclear whether that incident contributed to the eruption on Sunday.

Officials will continue monitoring the eruption and provide updates as things develop, according to the U.S. Geological Survey.

Mauna Loa has erupted 33 times since 1843, with its last eruption being recorded in 1984. During that incident, lava flow from the volcano came within 4.5 miles of the island’s largest town, Hilo, according to the U.S. Geological Survey.

The Hawaiian Volcano Observatory will coordinate with other emergency management partners to monitor the volcanic activity, it said in the emergency alert. Officials also confirmed it will conduct an overflight to assess future hazards.

The first round of Social Security retirement payments slated to be distributed in February is set to go out to recipients in just five days.
VIRGINIA STATE・2 DAYS AGO
WashingtonExaminer

Canada is tracking what it described as a "potential second incident" of a Chinese surveillance balloon moving over the country.
MONTANA STATE・2 DAYS AGO
WashingtonExaminer

EXCLUSIVE — A new book by Christopher C. Miller, the acting secretary of defense in the final months of Donald Trump’s presidency, recounts his appointment to the post amid questions about his predecessor’s loyalty.
MONTANA STATE・21 HOURS AGO
WashingtonExaminer

Sen. Ted Cruz (R-TX) said Sunday that he doesn't believe that the Biden administration would have shot down the Chinese spy balloon had its existence not made it into the news.
MONTANA STATE・12 HOURS AGO
WashingtonExaminer

Last year, President Joe Biden blistered his predecessor for mishandling classified files. Now, finding himself entangled in a similar quagmire, Biden has repeatedly downplayed questions about his own handling of the nation’s secrets.
INDIANA STATE・1 DAY AGO
WashingtonExaminer

A high-ranking government official who has been asked by Hunter Biden to launch an investigation in connection to his abandoned laptop has long-standing ties to President Joe Biden and his family, records show.
DELAWARE STATE・2 DAYS AGO
WashingtonExaminer

The U.S. military brought down the Chinese surveillance balloon on Saturday afternoon once it reached the Atlantic Ocean off the South Carolina coast after it traveled across the continental United States.
KANSAS STATE・1 DAY AGO
WashingtonExaminer

It’s been just over a month since Republicans took control of the House and have begun to usher in a new era of rules and legislative priorities.
1 DAY AGO
WashingtonExaminer

California taxpayers may get some extra cash within the next couple of weeks thanks to the final wave of the state's Middle Class Tax Refund.
CALIFORNIA STATE・1 DAY AGO
WashingtonExaminer

Sen. Roger Wicker (R-MS), the ranking member of the Senate Armed Services Committee, slammed the Biden administration for its handling of the Chinese spy balloon on Saturday, which was successfully shot down Saturday afternoon.
MONTANA STATE・1 DAY AGO
WashingtonExaminer

Stimulus update: 11 days to claim checks worth up to $800 in South Carolina

South Carolina residents have 11 days left to file their 2021 taxes and receive a rebate of up to $800.
SOUTH CAROLINA STATE・1 DAY AGO
WashingtonExaminer

Rep. Jim Himes (D-CT), the top Democrat on the House Intelligence Committee, blasted his Republican colleagues on Friday for demanding that a Chinese surveillance balloon hovering over the United States be shot down.
MONTANA STATE・2 DAYS AGO
WashingtonExaminer

The Memphis Police Department in Tennessee has fired another officer in the aftermath of the police beating and death of Tyre Nichols last month.
MEMPHIS, TN・2 DAYS AGO
WashingtonExaminer

Republicans blasted the Democratic National Committee on Saturday for breaking a decadeslong tradition by removing the Iowa caucus from the beginning of the primary season.
IOWA STATE・1 DAY AGO
WashingtonExaminer

Senate Republicans are signaling they’re willing to box out weak GOP candidates in the 2024 primaries following a lackluster 2022 performance that ended with their minority shrinking in the upper chamber.
GEORGIA STATE・1 DAY AGO
WashingtonExaminer

EXCLUSIVE — As President Joe Biden takes to the podium for the State of the Union address Tuesday, former Afghanistan Ambassador to the United States Roya Rahmani is asking Americans to remember the extreme suffering and anguish of Afghanis half a world away.
WASHINGTON STATE・1 DAY AGO
WashingtonExaminer

Secretary of State Antony Blinken explained why he canceled his trip to China, saying, "Conditions were not conducive for a constructive visit at this time."
WASHINGTON STATE・2 DAYS AGO
WashingtonExaminer

Six Republicans most likely to challenge Trump in 2024

A crowded GOP primary seems increasingly possible in 2024, as more Republicans are expected to emerge to face former President Donald Trump for the party's nomination next year.
INDIANA STATE・1 DAY AGO