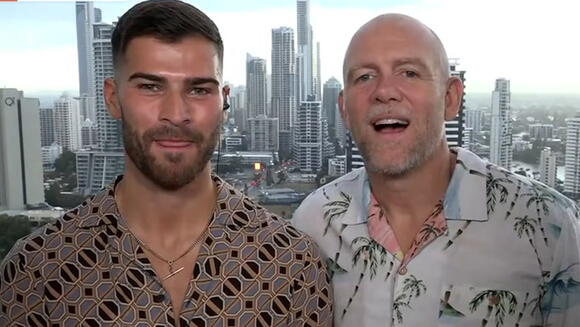 Mike Tindall has said that he found it “a bit weird” making friends with Matt Hancock on I’m a Celebrity... Get Me Out of Here!

The former rugby player appeared alongside the disgraced Conservative MP on the most recent series of the ITV reality show, which finished on Sunday (27 November).

Tindall ultimately finished in fourth place, while Hancock, who made it through to the final, finished third.

Speaking on Good Morning Britain on Monday (28 November), Tindall was asked whether he had expected to become friends with the controversial former health secretary.

“No, not really and it’s still a bit weird,” said Tindall. “He was walking in with a lot of preconceptions. We told him, ‘You better get ready to do all the trials.’ We were like, ‘Oh well done ,well done, are you ready to go again tomorrow?’ and we were right.

“What Matt did prove as a campmate is he could win stars, he wasn’t phased by the trials. He was put up against it and when you’re in that environment, you need to bring back the food, and he did that.”

Scott had been the strong favourite to win the final , with odds of 2/9. Hancock had been considerably less likely at 5/1, while Warner was a relatively long shot at 10/1.

Tindall returned to the show a day after his departure to crown Scott the Queen of the Jungle, after presenters Ant and Dec had annonuced the result.

Click here for to find out how much this year’s I’m a Celebrity contestants were reportedly being paid .

Friends star Maggie Wheeler has said Matthew Perry’s tell-all memoir was “sad” for her to read.The actor, who played Janice in the hit NBC show – the on-off girlfriend of Chandler – told PageSix that Perry’s memoir was “difficult” for her to read because it made her realise the ways he “suffered” from addiction while filming the TV series.In his autobiography, Friends, Lovers and the Big Terrible Thing, which was released in October, 53-year-old Perry revealed that he struggled with addiction and nearly died at aged 49, when his colon burst from opioid overuse.Wheeler said that she had “many...
10 HOURS AGO
Tyla

The daughter of a star from The Sopranos has tragically died, just three months after giving birth to a baby girl. Odele Ventimiglia, the daughter of actor John Ventimiglia, passed away on 12 January with a cause of death not yet confirmed publicly. The sad news was confirmed by family...
1 DAY AGO
brides.com

When Prince Harry and Meghan Markle announced that they were expecting their first child together (who would later be named Archie) on October 15, 2018, the public couldn’t contain their excitement. But before the Duke and Duchess of Sussex shared the news with the world, they revealed the information to the royal family. In his new memoir, Spare, Harry opens up about the first time the couple broached the subject with their relatives. Harry writes in his novel that he and Meghan had planned on starting a family after they tied the knot in May of 2018. They learned they were expecting a few months later, so they decided to tell members of the royal family at Princess Eugenie’s wedding on October 12, 2018.
1 DAY AGO
The Independent

Brooklyn Beckham has been subjected to heated criticism while publicly exploring his latest career venture.The son of David and Victoria Beckham, 23, has been posting cooking clips on social media to share his latest culinary creations.In his latest video, the budding chef cooked a creamy truffle tagliatelle pasta. He prepared the sauce using a generous helping of truffle before adding extra black truffle shavings as a garnish at the end of the video.Beckham captioned the clip: “In my kitchen, no such thing as too much truffle.”In the comments, he was criticised by social media users for being “out of...
16 HOURS AGO
The Independent

King Charles III has informed the Duke of York he can no longer use his suite of rooms at Buckingham Palace, it has been reported.While the palace undergoes its £369m renovation, Prince Andrew’s belongings have reportedly been moved out and will not be returned again.According toThe Sun, the disgraced duke was told there is “no place” for him at the palace and he will have to move elsewhere if he wishes to remain in London.The newspaper quoted a source as saying: “The King has made it clear that Buckingham Palace is no place for Prince Andrew. “First his office...
2 DAYS AGO
The Independent

‘The Traitors’ Season 1 Winner Has Been Crowned

SPOILER ALERT: This article contains the name and details of the winner of The Traitors Season 1. Peacock dropped all 10 episodes of the first season of The Traitors on January 12. The show based on a Dutch format called De Verraders and whose BBC One adaptation was a hit in England has crowned its first winner. Since all episodes were made available at once, some viewers might just be starting to watch the show, others are close to finishing, and some have yet to discover it. This is your last warning because ahead, we will reveal the winner of the...
31 MINUTES AGO
The Independent

John Legend has shared his first photo celebrating the arrival of his and Chrissy Teigen’s newborn daughter, Esti Maxine.The singer first announced the birth of his fourth child with Teigen at a private concert on 13 January, before the model shared the news with the rest of the world.In his own Instagram post on Thursday (26 January), Legend shared a photograph of him cradling Esti in his arms as he beams at the camera.He wrote in the caption: “Our new love.”Commenting on her husband’s latest post, Teigen gushed: “Eeee I love her.”The arrival of the couple’s new daughter comes...
2 DAYS AGO
The Independent

Katy Perry has revealed she turned down a chance to work with Billie Eilish as she assumed her music would be “boring”.The “Waking Up in Vegas” singer said, in a new TikTok post shared by 102.7 KIIS FM, that she was once sent an email saying “Hey, check out this new artist. I’d really like us to work with her.”Perry told crowd members at what appeared to be an intimate gig: “It was a song called ‘Ocean Eyes’ and it was just a blonde girl, and I was like, ‘Meh, boring.’ The singer said she now considers her decision...
10 HOURS AGO