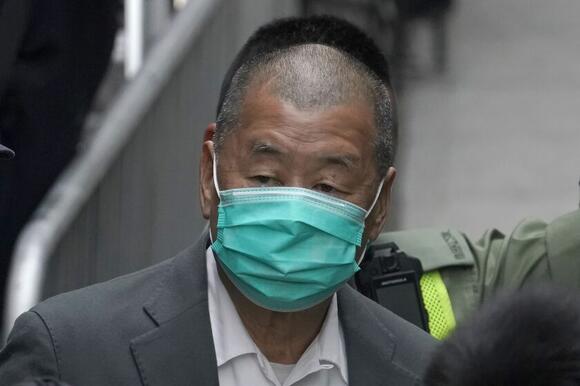 Hong Kong's leader said on Monday he will ask Beijing to rule whether to let foreign lawyers be involved in national security cases after the city's top court allowed a prominent pro-democracy publisher to hire a British lawyer for his upcoming trial.

John Lee said the government would ask for a postponement of Jimmy Lai's high-profile trial that was due to start Thursday. But he did not offer a timetable for the interpretation that could effectively preempt the court judgment.

“At present, there is no effective means to ensure that a counsel from overseas will not have conflict of interest because of his nationality. And there is also no means to ensure that he has not been coerced, compromised, or in any way controlled by foreign governments, associations or persons,” he said.

The move was targeting overseas counsels who do not have the general practice qualification to carry out legal service in Hong Kong, he added.

Lai, the founder of the now-defunct Apple Daily and one of the most prominent figures in the city's pro-democracy movement, was arrested after Beijing imposed a tough n ational security law to crack down on dissent following widespread protests in 2019. He faces collusion charges and a maximum penalty of life imprisonment.

While the city's secretary for justice was appealing an earlier ruling that approved Lai to hire a veteran British lawyer at the top court, pro-Beijing politicians and newspapers also voiced objections over the last few days.

In a closely watched judgment Monday, the top court ruled that the secretary had raised “undefined and unsubstantiated issues said to involve national security” that were not mentioned or explored in the lower courts.

“No appropriate basis has been made out for the grant of leave to appeal,” the judges said.

The lawyer in Lai's case was Timothy Owen, a London-based legal veteran who specializes in criminal and human rights law.

Owen, of Matrix Chambers, appeared in previous Hong Kong’s high-profile cases. He represented British banker Rurik Jutting, who was convicted for murdering two women, and a police officer who appealed his conviction for assaulting a pro-democracy activist during 2014 protests.

Last month, the lower court granted the approval for him to represent Lai, saying it was in the public interest to have an eminent overseas specialist like Owen involved at the trial. But the secretary of justice insisted on his objections despite other judges rejecting his bids to overturn that ruling. He suggested a blanket ban on overseas lawyers involved in national security cases unless under exceptional circumstances.

Lai is already serving a 20-month prison sentence for his role in unauthorized assemblies. He’s also expecting a sentencing over his fraud conviction next month.

His legal team earlier asked the United Nations to investigate his imprisonment and multiple criminal charges as “legal harassment” to punish him for speaking out.

The National Security Law criminalizes acts of succession, subversion, terrorism, and collusion with foreign forces. It has led to the arrests of many prominent democracy activists and damaged faith in the future of the international financial hub.

SEOUL, South Korea (AP) — South Korea says it will continue to restrict the entry of short-term travelers from China through the end of February over concerns that the spread of COVID-19 in that country may worsen following the Lunar New Year’s holidays. South Korea in early January...
24 MINUTES AGO
Benzinga

Ukrainian president Volodymyr Zelenskyy said Russian President Vladimir Putin is losing a lot more soldiers in the war as Russia's unprecedented attacks continued in Kyiv. What Happened: Zelenskyy, in an interview with Sky News, said, "The east is losing a lot of people. They don't care about that." "We count...
16 HOURS AGO
Benzinga

President Joe Biden has reportedly said there would be “consequences” for Saudi Arabia for collaborating with Russia to trim oil production, an indication that cracks have appeared in the relationship between the two long-time allies. What Happened: Biden told CNN’s Jake Tapper in an interview broadcast in October...
2 DAYS AGO
Newsweek

The U.S. announced Wednesday that it would be sending 31 Abrams tanks to Ukraine one day after Germany said it would send its Leopard 2 tanks.
1 DAY AGO
Business Insider

The head of Ukraine's military, Valerii Zaluzhnyi, said he had "no doubts" when he donated his $1 million inheritance.
WASHINGTON STATE・1 DAY AGO
The US Sun

A RUSSIAN warship armed with “unstoppable” hypersonic missiles is sailing towards the US coast in a show of strength, reports claim. The guided missile frigate Admiral Gorshkov has been closely monitored by Nato navies on its maiden voyage armed with 6,670mph Zircon weapons. An unconfirmed Russian Telegram channel...
2 DAYS AGO
San Diego Union-Tribune

Europe's top human rights court has ruled that it can adjudicate cases brought by the Netherlands and Ukraine against Russia for alleged rights violations in eastern Ukraine in 2014, including the downing of Malaysia Airlines Flight MH17
1 DAY AGO
San Diego Union-Tribune

Pope discusses his health, his critics and future of papacy