WBEN Legal Analysis: 'A small step towards their march to justice' as Tops shooting suspect to plead guilty today 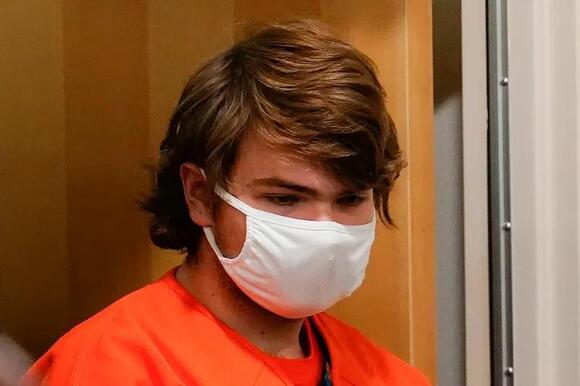 Buffalo, NY (WBEN) - A white gunman who targeted a Buffalo supermarket in a predominantly Black neighborhood plans to plead guilty on Monday to killing 10 people and wounding three others, according to lawyers representing victims’ relatives.

Payton Gendron, 19, is scheduled to appear in Erie County Court for a hearing that was postponed for a week by a snowstorm.

Gendron’s lawyers disclosed in recent weeks that he planned to plead guilty to all of the counts in a state indictment and to waive his right to appeal, according to attorneys John Elmore and Terrence Connors, who represent families of those killed and injured.

Attorney John Elmore represents families of some of the shooting victims and tells WBEN they feel somewhat relieved they do not have to go through a trial. "But this is just a small step towards their march to justice because there's still a federal case pending, where (the suspect) is facing the possibility of a death penalty," says Elmore. He says the march toward justice will continue with civil matters, He says he's looking into litigation against the manufacturer of the weapon, the manufacturer of the gun magazine and the manufacturer of the bulletproof vest.

Elmore believes the shooter's attorneys have one reason for pleading guilty to the state charges Monday. "(He) is like a cornered rat or a caged rat, he has no place to go," said Elmore. He says this is the biggest card that they've had is that he's accepting responsibility in state court, that he's sentenced to life imprisonment. "It's a very heinous crime, and he doesn't have a lot of cards to play. And apparently he wants to live, he doesn't want to face death by injection, so this is the best hope that he can have to have is life spared, they said to plead guilty early and admit responsibility for what he did," adds Elmore.

Attorney Terry Connors also represents victims' families and tells WBEN he agrees with Elmore on the shooter's motives for pleading guilty. "I assume that the one of the reasons for entering a plea of guilty to each count of the indictment in the state prosecution is that it will demonstrate that he accepted some responsibility, and that may help him that may help him in connection with the decision of the federal prosecutors to decide whether or not to pursue the death penalty.," says Connors.

Connors says the families he represents are remarkable. "They're really a remarkable group in the sense that their focus isn't on the shooter and the horrible, racist conduct of the shooter that focuses on trying to turn this terrible tragedy into something positive for our community," says Connors. "They're volunteering, they're doing things in his buffalo that have never been attempted before. They're speaking everywhere and speaking out about racism and hate."

The 25-count grand jury indictment includes charges of murder, murder as a hate crime and domestic terrorism motivated by hate, which carries an automatic life sentence upon conviction.

Gendron also faces charges for separate federal hate crimes that could result in a death sentence if he is convicted. The U.S. Justice Department has not said whether it would seek capital punishment.

Investigators said Gendron drove about three hours to Buffalo from his home in Conklin, New York, intending to kill as many Black people as possible at a store that he chose because of its location in a predominantly Black neighborhood.

Shortly before opening fire with an AR-15-style rifle on May 14, he posted documents that outlined his white supremacist views and revealed that he had been planning the attack for months . Inside the store, he roamed the aisles and livestreamed the attack from a helmet-mounted camera as he shot store employees and shoppers.

He was arrested in the parking lot upon exiting through the store's front entrance.

Relatives of the victims have since called on Congress to address issues of white supremacy and gun violence. A food summit organized by Buffalo-based attorney and activist Kevin Gaughan last month focused on closing the “grocery gap” laid bare by the attack on the neighborhood’s only supermarket.

The supermarket was closed for two months .

Almost simultaneously as the horrific Memphis Police beating video of Tyre Nichols was bring released Friday evening, Buffalo Mayor Byron Brown was presiding over a faith-based vigil on the steps of city hall.
BUFFALO, NY・1 DAY AGO
WBEN 930AM

Buffalo’s top cop says he agrees with Governor Hochul’s bid to roll back some of the bail reform. Hochul wants judges to have more leeway in determining whether to grant bail.
BUFFALO, NY・1 DAY AGO
WBEN 930AM

A 36-year-old Springville woman was arraigned on Wednesday morning in Springville Village Court in connection to a fire in the village late Monday night. Read more here:
SPRINGVILLE, NY・4 DAYS AGO
WBEN 930AM

“Just hold on,” shouts a Buffalo Police officer shortly after 7pm on Christmas Eve as he responds to people stranded in a building near Fuhrmann Boulevard and Ship Canal Parkway.
BUFFALO, NY・3 DAYS AGO
WBEN 930AM

The Buffalo Police Department announced Tuesday morning the arrest of a pair of men in relation to a search warrant executed this past Friday on the first block of Gorski Street. Read more here:
BUFFALO, NY・5 DAYS AGO
WBEN 930AM

Mayor Byron Brown told WBEN, “The buck stops with me,” when it comes to the lack of communication to city residents about the lack of fluoridation in city water.
BUFFALO, NY・2 DAYS AGO
WBEN 930AM

A significant police presence Tuesday morning at Red Roof Inn on Flint Road. Police say a 27 year old man was found with a gunshot wound. He is at ECMC.
AMHERST, NY・5 DAYS AGO
WBEN 930AM

Darius Pridgen to not seek re-election on Buffalo Common Council

Buffalo Common Council President Darius Pridgen will not seek re-election once his term in office is up at the end of the year. Pridgen has served as the Ellicott District representative for 12 years in the council. Read more here:
BUFFALO, NY・4 DAYS AGO
WBEN 930AM

The head of Buffalo Water will be meeting with the Common Council next week to discuss the removal of fluoride from the city’s drinking water and when it will be put back in.
BUFFALO, NY・3 DAYS AGO
WBEN 930AM

With depleted ranks of volunteer firefighters and first responders, a group of Erie County Legislators has introduced a bill to offer property tax relief for volunteers with at least two years of service.
ERIE COUNTY, NY・3 DAYS AGO
WBEN 930AM

Town of Niagara officer shot at during burglary probe

Three men have been arrested in connection with a burglary investigation. Sheriff’s deputies say a Town of Niagara Police officer was shot at, but not wounded.
NIAGARA COUNTY, NY・10 DAYS AGO
WBEN 930AM

The Erie County Stadium Corporation, a subsidiary of Empire State Empire Development Corporation, unanimously approved a general project agreement on the $1.4 billion deal for a new stadium for the Buffalo Bills
ERIE COUNTY, NY・6 DAYS AGO
WBEN 930AM

Senator Chuck Schumer is urging movement to get a deal reached on a debt ceiling deadline. He says a default would be economically disastrous for the region.
BUFFALO, NY・4 DAYS AGO
WBEN 930AM

An FDA proposal calls for an annual COVID vaccine booster shot, similar to the annual flu shot. A local doctor says that is likely. He also hopes to see a combined COVID/flu vaccine.
BUFFALO, NY・5 DAYS AGO
WBEN 930AM

During a stop in Buffalo over the weekend, WBEN asked New York Governor Kathy Hochul if the deadlines for the phasing out of natural gas energy and appliances she outlined in her State of the State address would hold firm.
BUFFALO, NY・6 DAYS AGO
WBEN 930AM

Despite the response by the Buffalo Water Authority to a report of no fluoride in the city drinking water system, the news caught many residents completely by surprise, including members of the Buffalo Common Council. Read more here:
BUFFALO, NY・4 DAYS AGO
WBEN 930AM

The Alzheimer’s Association of Western New York is reminding those caring for Alzheimer’s patients of steps they can take to help keep patients from wandering off. A Niagara County woman died this week after wandering off.
NIAGARA COUNTY, NY・1 DAY AGO
WBEN 930AM

Several mayors who heard Buffalo Mayor Byron Brown discuss the city’s lawsuit against the firearms industry, are interested in making it a class action lawsuit. Mayor Brown joined WBEN on Thursday from the US Conference of Mayors.
BUFFALO, NY・10 DAYS AGO