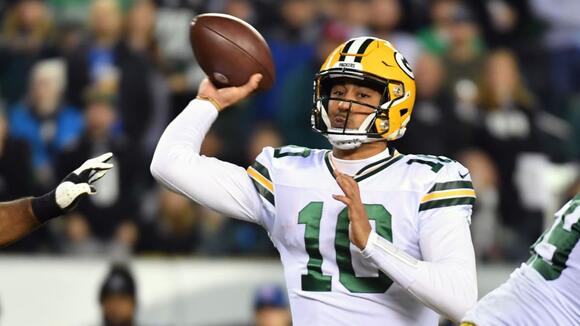 Thrown into an almost impossible situation, Jordan Love led the Green Bay Packers to 10 points in two possessions in the loss to the Philadelphia Eagles.

GREEN BAY, Wis. – In 2007, third-year pro Aaron Rodgers replaced the legendary Brett Favre at Dallas. The Packers lost but Rodgers was excellent and cemented his spot as the team’s future starting quarterback. Fifteen years later, Rodgers’ status as a future Hall of Famer is as sure as the sunrise.

On Sunday night, third-year pro Jordan Love replaced the legendary Rodgers at Philadelphia. The Packers lost but Love was impressive.

On that night in Dallas, Rodgers played the final 40 minutes. Against the Eagles, Love played the final 11. He completed 6-of-9 passes for 113 yards and one touchdown. His two possessions resulted in 10 points.

“I’m not shocked, to be honest with you, that he went out there and played well and showed great poise,” coach Matt LaFleur said. “We see it on a daily basis in practice. I know people might not necessarily agree with that, but I see it every day. I think he’s a guy that has continued to get better and better each and every day in practice and just does a great job against our defense, giving them fits and giving them really tough looks.”

With Rodgers out with injured ribs , Love entered in an almost impossible situation. The Packers trailed 37-23 – a two-touchdown deficit that might as well have been 100 touchdowns considering the defense’s total inability to stop Philadelphia’s rushing attack .

His first pass came on second-and-10, a pass into the flat to AJ Dillon for a gain of 5. On third-and-5, Love hit Allen Lazard at the sideline for 7 and a first down. It was Green Bay’s first and only third-down conversion of the night.

“I think it just gave us – especially me, it gave me some confidence that we were moving the ball,” Love said. “That was a huge one. We needed to convert that. The situation, we had to go score. It was huge, kind of a drive-starter for us.”

The next play was Love’s biggest of the night, a 63-yard touchdown to Christian Watson. Watson caught the ball about 10 yards downfield, then stepped on the jets. The Eagles’ secondary didn’t have a prayer of catching the rookie.

Love stayed hot. On the first play, he hit Love over the middle for 17 to the Eagles’ 38. On the next play, he found the hole in the Eagles’ zone and threw his best ball of the night – a bull’s-eye to Aaron Jones at the sideline that the star running back dropped inside the 20. Love connected with Lazard for 17, just missed Watson in the end zone on a scramble play, hit Robert Tonyan for 6 and threw a hair behind Randall Cobb for a potential touchdown on third down. Still, it was enough for a field goal to make it 40-33.

The Eagles recovered the onside kick and drained the rest of the clock to rob Love of a chance to be the hero.

“The mind-set for me was, ‘Let’s go win the game. Let’s go do whatever we have to do,’” Love said. “It feels good to be in a situation like that where it’s high stakes.”

Love performed poorly in a start last year at Kansas City and in the second half last year at Detroit. In six quarters in those games, he threw three interceptions and fumbled twice.

Rodgers, watching from the locker room, was impressed. As Rodgers did during training camp and the preseason, he pointed to Love’s work with venerable quarterbacks coach Tom Clements as a key factor for his improved play.

“Just fundamentally, I think that’s the biggest thing,” Rodgers said. “I think Tom deserves credit for coming in. You know, Tom was huge for me in my early years of helping me hone the fundamentals. The drills we work on in practice always translate to game play. Feel like he’s become much better in timing up his drops with the routes. When you do that, it allows everything to kind of flow smoothly from there and the accuracy improves and the decision-making is easier because you’re just playing on time all the time.”

Love’s work on the practice field showed up on the playing field. He entered Sunday having thrown nine passes in garbage time against the Vikings and Jets. Against the Eagles – against one of the best defenses in the NFL – Love showed the skill that made him the surprise first-round pick three years ago.

“I can hang my hat on that as the moment I’ve been preparing for this whole season,” Love said. “You never know when it’ll come. Especially in a game like this, my mind-set was let’s go win. Let’s comeback and win.”

If Traded, When Would Packers Face Rodgers?

Here are the 10 betting favorites to acquire Aaron Rodgers and when the Green Bay Packers will play those teams.
GREEN BAY, WI・18 HOURS AGO
PackerCentral

Everyone knows the Jets and Raiders make sense as possible Aaron Rodgers trade destinations. A new team has entered the mix at one sportsbook.
GREEN BAY, WI・23 HOURS AGO
PackerCentral

Regardless of whether it's Aaron Rodgers or Jordan Love, the Packers should be helped by playing four games against the NFC South next season.
GREEN BAY, WI・1 DAY AGO
PackerCentral

With 83 days until the start of the 2023 NFL Draft, the Green Bay Packers picked a receiver and a tight end in a pair of new mock drafts.
GREEN BAY, WI・2 DAYS AGO
PackerCentral

Here are the latest odds for Aaron Rodgers playing for the Raiders, Jets and 49ers, with one major update this week.
GREEN BAY, WI・1 DAY AGO
PackerCentral

With 82 days until the start of the 2023 NFL Draft, here are seven mock drafts, leading off with a new NFL.com mock draft by Eric Edholm.
GREEN BAY, WI・21 HOURS AGO
PackerCentral

Led by Kenny Clark at nose tackle, four members of the Green Bay Packers were among the top vote-getters in the inaugural Players’ All-Pro Team.
GREEN BAY, WI・2 DAYS AGO