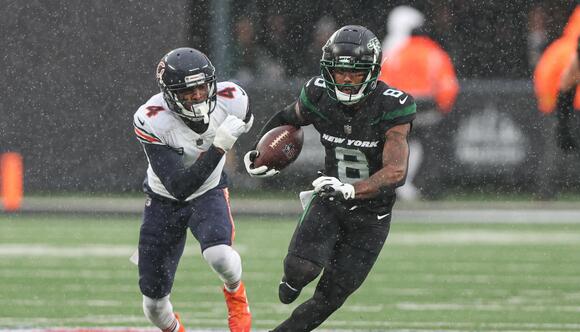 Two leaders in the locker room and statistically went out with injuries and the Bears stacked up some other injuries in a loss.

The injuries to Darnell Mooney and Eddie Jackson on Sunday against the Jets not only left the Bears down on talent but also leadership.

Two key players went out, Mooney with an ankle injury and Jackson with a foot injury, and NFL Network's Tom Peliserro reported the Bears fear the injury to Mooney is a serious one. Coach Matt Eberflus didn't want to comment on the injuries themselves, but did on the players.

"Yeah, whenever you have somebody go down that's a good player, both those guys are really good players, No. 1, Eddie's been a really good player for us this year, Darnell is our leading receiver and he's done a great job," Eberflus said. "When you lose the production of those guys, No. 1, that always hurts. And also the leadershp part of it. Those guys have been great in the locker room. They're great teammates. They really are encouraging to others. And they really model the behavior we wish to see. So they're good."

Mooney leads the Bears with 40 receptions and for the first time in a game he played was kept off the board in Sunday's loss. He went out with 11:48 left in the third quarter while blocking on a 14-yard David Montgomery run from the 1-yard line.

"It stinks," quarterback Trevor Siemian said. "As a player, terrible. But if you've spent any time with Darnell, he's one of the best dudes in our locker room. That's the part of the game that stinks Right? He's a strong dude. But like I said, guys like that, when anybody gets hurt, especially Darnell, it stinks."

Jackson came into the this week tied for third in the league in interceptions with four.

Cornerback Kindle Vildor told reporters after the game that Jackson will stay involved even if his injury does take him off the field a while.

"You got a leader like Eddie Jackson, he goes down and stuff liek that but he does a good job of helping the young guys prepare like Elijah (Hicks)," Vildor said."We know we can count on him, as well."

The Bears' depth is being tested greatly with Jackson's injury because safety Dane Cruikshank had a hamstring injury Sunday and starting safety Jaquan Brisker missed the game with a concussion. They also were without starting nickel cornerback Kyler Gordon due to a concussion.

They're basically left with DeAndre Houston-Carson and Hicks as healthy safeties, unless Brisker comes back from the concussion this week to face Green Bay.

The Bears also lost two right tackles in the game to injuries. Riley Reiff left with a shoulder injury Larry Borom suffered an injury that was unreported by the Bears.

"It's never a good thing to see any of your teammates go down," guard Teven Jenkins told reporters afterward. "For me, it was a little sad to see Larry go down because he's my boy."

It could mean playing time in the next game at right tackle for Alex Leatherwood, or possibly even at guard with Jenkins moving to tackle. Or they could put Michael Schofield in at right guard and move Jenkins to right tackle if both linemen are out next week.

The Bears already had quarterback Justin Fields out with a left shoulder injury and running back Khalil Herbert on injured reserve with a hip injury.

If the Bears are looking to sign one of the top free agent running backs they might find it difficult due to low tag figures.
CHICAGO, IL・1 HOUR AGO
BearDigest

Bears Tackle Interest Should Focus More to Right Side

Tackle is a position many scouts see as limited in numbers for the draft and the Bears' need is more right side than left.
CHICAGO, IL・13 HOURS AGO
BearDigest

The draft offers options for the Bears if they try to upgrade at receiver, although not quite like the last two years.
CHICAGO, IL・1 DAY AGO
BearDigest

Origin Story Retold: Patrick Mahomes Should Be a Bear

The father of Chiefs Super Bowl QB Patrick Mahomes told AM-670 that his son fully expected he'd be drafted by the Bears at No. 3.
CHICAGO, IL・4 HOURS AGO
BearDigest

The salary cap came in even higher than many projections and the Bears will have league-high of about $98 million to spend.
CHICAGO, IL・8 HOURS AGO
BearDigest

Setting goals for the second year of this Bears rebuild as they move toward wins over foundation building.
CHICAGO, IL・2 DAYS AGO