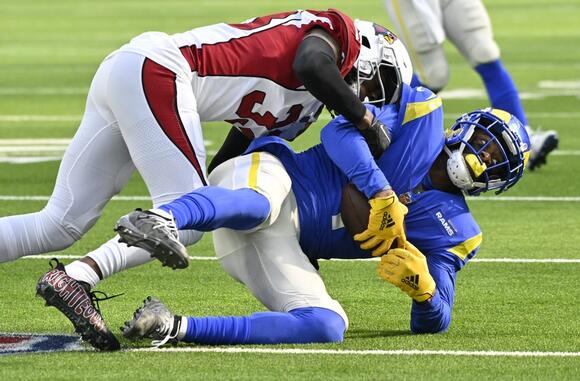 Rams wide receiver Allen Robinson II will be on the sidelines for the remainder of the season due to a foot injury that will require surgery, Los Angeles coach Sean McVay told reporters Sunday.

Robinson reportedly has a stress fracture in his foot that will require the insertion of a screw during surgery.

Robinson was limited in practice all week and ultimately was inactive for Sunday’s 26-10 loss to the Kansas City Chiefs. McVay said a CT scan taken on Friday showed a stress fracture on the navicular bone in Robinson’s foot.

This news brings to a close what had been an underwhelming season for Robinson, 29, who came to the Rams in March after signing a three-year, $46.5 million contract. In 10 games this season, Robinson recorded five-plus catches only twice and went over 50 yards receiving three times. His 63 receiving yards against Carolina in Week 6 was his season high.

Robinson finishes the season with 33 receptions for 339 yards and three touchdowns.

It’s the sound of hearts breaking across Philadelphia and the state of Pennsylvania… and let’s be honest, everywhere else in the country, too. Eagles quarterback Jalen Hurts made a very rare public appearance with his girlfriend Bryonna “Bry” Burrows after the NFC Championship game this past Sunday, which is a surprise to many fans, as he is extremely private about his life outside of football.
PHILADELPHIA, PA・17 HOURS AGO
Yardbarker

The Pittsburgh Steelers and Philadelphia Eagles have been in the NFL since its inception. The two teams even briefly combined forces during World War II and called themselves the Steagles. The players and coaches didn’t like it then and the two fan bases don’t like each other now. Fans from the same state rarely get along and the vitriol was on display after the Eagles made their second Super Bowl in five seasons.
PHILADELPHIA, PA・1 DAY AGO
OnlyHomers

Once again, the Dallas Cowboys failed to make a deep playoff run as they fell short losing to the San Francisco 49ers 19-12 last Sunday in the divisional round of the playoffs. The elite offense of the Dallas Cowboys sputtered and struggled, which lead to Jerry Jones and head coach Mike McCarthy to make a tough decision.
DALLAS, TX・1 DAY AGO
Athlon Sports

Patrick Mahomes' wife, Brittany, wants all the smoke.  Brittany, who's never been afraid to speak her mind on social media, just posted a message for the Bengals.  Hint: It's not very friendly.  "Cancun on 3," she said on Twitter.  "Cancun on 3" has become a trendy phrase in the ...
CINCINNATI, OH・2 DAYS AGO
Sportsnaut

The San Francisco 49ers lost the NFC Championship Game on Sunday after injuries forced them to use a fourth-string quarterback.
SAN FRANCISCO, CA・1 DAY AGO
Larry Brown Sports

The Denver Broncos wanted to make a splash when hiring their next head coach, and they have done just that. Sean Payton has reached an agreement to become the head coach of the Broncos, according to multiple reports. The Broncos have agreed to a compensation package with the New Orleans Saints, who previously held Payton’s... The post Sean Payton lands head coach job appeared first on Larry Brown Sports.
DENVER, CO・12 HOURS AGO
Sportsnaut

The New York Giants are likely to retain starting quarterback Daniel Jones in the offseason. However, if long-term contract talks
ALABAMA STATE・2 DAYS AGO
Sportsnaut

NFL officials had a Championship Sunday to forget, with blown calls and questionable decisions that left the football world scratching
KANSAS CITY, MO・1 DAY AGO
Sportsnaut

Green Bay Packers quarterback Aaron Rodgers has yet to make a decision about playing in the NFL next season. Appearing
GREEN BAY, WI・13 HOURS AGO