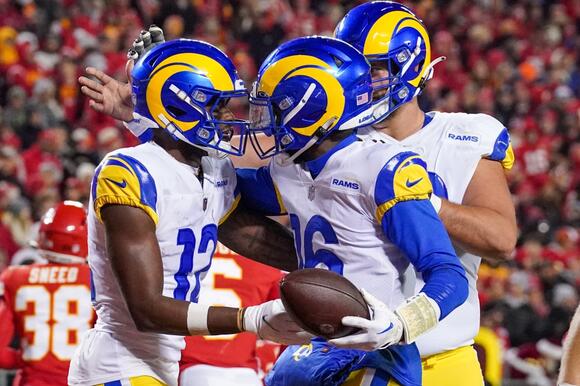 Former Virginia quarterback Bryce Perkins made his first-career NFL start on Sunday for the Los Angeles Rams against the Kansas City Chiefs.

The odds were stacked against Perkins in his first start, as he tried to lead the Rams against one of the best teams in the NFL while missing several starters on offense, including LA's top two wide receivers - Cooper Kupp and Allen Robinson II - and two starting offensive linemen in addition to starting quarterback Matthew Stafford, whose injury pressed Perkins into service. The outcome was less than ideal, but expected, as the Rams fell to the Chiefs 26-10.

The Rams tried unsuccessfully to establish the run game and Perkins had little time to pass before facing pressure in the pocket, as he was sacked three times. Perkins completed 13 of his 23 passing attempts for 100 yards and threw two interceptions, but he still managed to throw his first-career touchdown pass, finding Van Jefferson on a seven-yard slant to cap an impressive 14-play, 75-yard drive at the start of the fourth quarter.

Watch Perkins throw his first-career NFL touchdown pass in the video below:

It was far from a perfect game in his first NFL start, but Bryce Perkins made some nice plays and showed some dynamic flashes with his legs, running nine times for 44 yards.

It's uncertain if Los Angeles will start him again moving forward, but with the the defending Super Bowl Champs likely to miss the playoffs at 3-8 on the season, the Rams might be inclined to give Perkins some more opportunities in the final six weeks of the season.

Stay up to date on all the former Virginia athletes playing at the professional level here: Pro Hoos on Sports Illustrated

The three-time All-ACC linebacker will play his final season of college football at Iowa
CHARLOTTESVILLE, VA・13 HOURS AGO
Cavaliers Now

The ACC's No. 1 offense and No. 1 defense go head-to-head on Tuesday night in Charlottesville
CHARLOTTESVILLE, VA・2 DAYS AGO
Cavaliers Now

The Cavaliers fell two spots to No. 8 after their seven-game winning streak was snapped in Saturday's loss at Virginia Tech
CHARLOTTESVILLE, VA・2 DAYS AGO