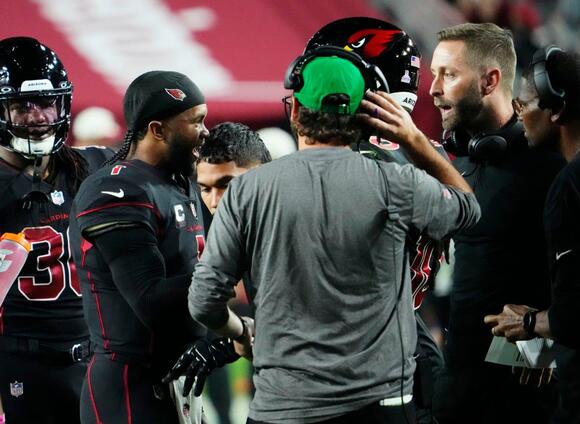 Kyler Murray and the Arizona Cardinals dropped their fourth game in five tries Sunday against the Los Angeles Chargers, yielding a comeback win for the home team .

This has Arizona at 4-8 on the season and completely out of the NFC Playoff race . The backdrop to this was a Murray interception on a fourth-and-one situation from the Cardinals own 34-yard line midway through the second quarter. It led directly to a Chargers touchdown and a 14-10 Arizona deficit.

Following the game, Murray decided it made sense to throw head coach Kliff Kinsgbury and the team’s scheme under the bus in talking with the media.

Murray also touched on Arizona’s inability to put the game away late while holding on to a narrow lead on the road.

“There is no excuse for our last three drives/ There’s no excuse. We got the players. There is no excuse not finishing that game on our terms, not having to put the defense out there,” Kyler Murray on Arizona’s late-game struggles. “They did their job. We don’t get a first down, we don’t run the clock.”

Contentious relationship between Kyler Murray and Kliff Kingsbury in Arizona

We’ve seen Murray take out his frustrations on his head coach multiple times this season . While he did not name Kingsbury directly, it doesn’t take a genius to realize who he was talking about.

These comments also come amid a report from NFL Media’s Ian Rapoport indicating that the relationship between the two has been “tense.” The two reportedly spent the past two weeks talking through everything while focusing on communication. Obviously, that did not have an impact on Sunday’s outcome.

Moving forward, it remains to be seen whether this relationship can be salvaged. But from the Cardinals’ perspective, there’s likely no other option.

Murray inked a five-year, $230.5 million contract extension this past offseason. He’s locked in long term. As for Kingsbury, he also received an extension ahead of the 2022 season.

While there’s a chance that Arizona eats the remainder of Kingsbury’s contract, it would be a bitter financial pill for the organization to swallow. As for Kyler Murray, he’s going to remain the face of the franchise despite some major struggles this season.

never really been confident in this little sawed-off runt as a quarterback, seems to always want to blame someone else, it might help if he didn't have to go so far back in the pocket to see over his lineman for an open receiver

Looks like Murray should have put down COD and studied his playbook with those extra hours. No small wonder the Cards wanted to put the extra study clause in his mega contract...

OU students said Kyler would come to class with ear buds in, go to the rear of class and never remove the buds. He has always felt entitled. Jalen Hurts on the other hand would come to class, sit in the front and participate. See where their teams differ. See what their team records are. See who has a good relationship their coach and teammates. Class vs. punk.

Patrick Mahomes is done hearing about all this "Burrowhead" talk.  During his postgame interview on Sunday night, Mahomes took a shot at Joe Burrow and the Bengals.  The Chiefs quarterback made it clear it's called Arrowhead Stadium.  “We showed this place is Arrowhead, it’s not ...
CINCINNATI, OH・11 HOURS AGO
The Spun

Joe Burrow is hoping to lead the Cincinnati Bengals back to the Super Bowl on Sunday night. The former No. 1 overall NFL Draft pick is taking on the Kansas City Chiefs in the AFC Championship Game.  During the game, Burrow's longtime girlfriend, Olivia Holzmacher, is trending on social media. ...
CINCINNATI, OH・12 HOURS AGO
Athlon Sports

Patrick Mahomes' wife, Brittany, wants all the smoke.  Brittany, who's never been afraid to speak her mind on social media, just posted a message for the Bengals.  Hint: It's not very friendly.  "Cancun on 3," she said on Twitter.  "Cancun on 3" has become a trendy phrase in the ...
CINCINNATI, OH・11 HOURS AGO
Athlon Sports

Bengals coach Zac Taylor has every right to be furious with the AFC Championship Game's officiating crew.  Cincinnati was hosed on several atrocious calls during the game, especially during the second half.  However, Taylor didn't even mention the refs during his postgame interview.  ...
CINCINNATI, OH・11 HOURS AGO
Sportsnaut

The San Francisco 49ers lost the NFC Championship Game on Sunday after injuries forced them to use a fourth-string quarterback.
SAN FRANCISCO, CA・43 MINUTES AGO
Sportsnaut

NFL officials had a Championship Sunday to forget, with blown calls and questionable decisions that left the football world scratching
KANSAS CITY, MO・1 HOUR AGO
Sportsnaut

Miles Sanders rushed for two touchdowns, Haason Reddick delivered a huge performance and the Philadelphia Eagles are headed to the
PHILADELPHIA, PA・15 HOURS AGO
Sportsnaut

Entering the offseason, Sean Payton seemed like a sure bet to be hired as an NFL head coach again. Five
NEW ORLEANS, LA・21 HOURS AGO
Sportsnaut

Mississippi State clutch in overtime to knock off No. 11 TCU

Shakeel Moore sank a pair of 3-pointers early in overtime to help the Mississippi State Bulldogs break a five-game losing
FORT WORTH, TX・1 DAY AGO
Sportsnaut

Blake Hinson scored 21 points, including the bucket that gave Pitt its first lead since midway through the first half,
ARIZONA STATE・1 DAY AGO
Sportsnaut

One top NFL Draft expert firmly believes the Houston Texans will do everything in their power to try and move
HOUSTON, TX・1 DAY AGO
Sportsnaut

The New York Giants are likely to retain starting quarterback Daniel Jones in the offseason. However, if long-term contract talks
ALABAMA STATE・17 HOURS AGO
Sportsnaut

Future Hall of Fame point guard Chris Paul is in the back end of his career. The Phoenix Suns star
PHOENIX, AZ・17 HOURS AGO
Sportsnaut

Eleven years after being let go by the Philadelphia Eagles, coach Andy Reid has his sights set on revenge, with
KANSAS CITY, MO・11 HOURS AGO
Sportsnaut

The Philadelphia Eagles are headed to Super Bowl LVII after defeating the San Francisco 49ers in an NFC Championship Game
PHILADELPHIA, PA・16 HOURS AGO
Sportsnaut

Anyone who’s ever witnessed an NFL game likely agrees, football is an intense sport featuring plenty of emotions. Late in
PHILADELPHIA, PA・15 HOURS AGO
Sportsnaut

The San Francisco 49ers will have star running back Christian McCaffrey available for Sunday’s NFC Championship Game against the Philadelphia
SAN FRANCISCO, CA・20 HOURS AGO
Sportsnaut

The Green Bay Packers would prefer to trade quarterback Aaron Rodgers this offseason and “move on,” ESPN reported Sunday. The
GREEN BAY, WI・21 HOURS AGO