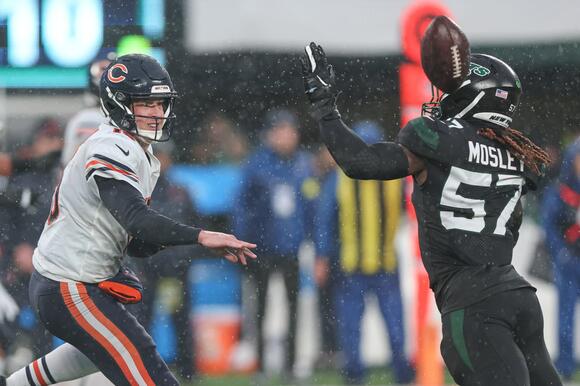 Analysis: Although Justin Fields watched from the bench, his impact on this Bears team was never more apparent.

Pregames never cause this much excitement.

Not only was it exciting, but the end result was revealing.

First the Bears really did take it down to 90 minutes before kickoff and the deadline before announcing whether Justin Fields would start.

Considering the way the second half of the 31-10 loss to the New York Jets went, the pregame was by far more exciting to Bears fans. However, it could have been preview of things to come unless Fields returns.

"We decided it was in the best interest in Justin and also for the Chicago Bears that he was inactive today," Bears coach Matt Eberflus said. "It comes down to really one thing—his strength. He didn't have the strength to protect himself in the game properly and to perform the way he wanted to perform."

There had been plenty of speculation but no real word on Fields' condition until the inactives came out. Backup Trevor Siemian said he wasn't certain he was even playing until that point.

And then he still wasn't.

Siemian went out for pregame and somehow suffered an oblique strain.

"Obviously when you're a passer that's obviously a big issue to throw the ball down the field," Eberflus said.

The Bears had actually put out a statement through the PR staff saying backup Nathan Peterman would start.

"I was throwing," Siemian said. "Something wasn't right, it flared up on me."

Siemian gutted it out, got off to a good start but stagnated along with the rest of the Bears offense after they had failed to take advantage of a botched Jets field goal attempt. The snap wasn't held properly on a 36-yard field goal in the rain, and the Bears took over at their own 18.

They faced third-and-1 and offensive coordinator Luke Getsy had Siemian try to run for the first down, oblique injury and all, off right tackle. Good call for a healthy Fields, not so much for a hobbled backup.

The Jets mauled Siemian to force the punt and then went on to the go-ahead TD on Mike White's 54-yard TD throw to Garrett Wilson. The Bears trailed the rest of the way.

While all of that was intriguing at the time, none of it carries a single bit of significance for the team's future beyond helping them having a better draft pick with another loss.

Fields' injury does carry significance. His condition for next week's game and starting against Green Bay is what's more critical.

"We think that he's getting better every single day," Eberflus said. "He felt better every single day. Just that, at the game time today he wasn't ready to go, to perform and protect himself. "I suspect we'll see where it goes. I think we're going to leave it day to day. And we'll decide one day at a time. If he keeps progressing then he's got an ppportunity to do so."

Never had Fields' value to this team been more apparent than during this game when Siemian was at quarterback.

That's not to say he'd have the same value for next year's team, but for this year it was obvious very obvious.

Siemian posed a threat with his arm after a drive on the first Bears drive to Cairo Santos' 22-yard field goal and the 4-yard TD pass he threw to Pringle.

Once the Jets got the lead, the Bears never responded. Unlike in other games with Fields playing, the Bears couldn't sustain offense over the final three quarters.

They usually have been at their strongest at this point in games.

They went six drives after their TD with only two total first downs and punted on five of those, the half ending with a kneel-down on the other. On their final two drives with the game decided, they did move it 48 and 47 yards but came away with an interception and the ball lost on downs.

The end result of all this was 32:05 of Jets possession time and a physical beating for the Bears defense against the Jets' power running.

Instead of getting better at game's end and being rested, the defense kept getting worse. The offense got worse, too.

This game, more than any other, showed Fields to be the great deodorizer for their defense by keeping them on the sideline with all of his third-down conversions with scrambles and his ball control.

Obviously, with Fields at quarterback eating up possession time and rushing yards, they forced opposing defenses to stay on the field longer and as a result they were able to stay in those games and threaten to even win them on final drives.

On this day, against a team using a third-string quarterback, they did nothing of the sort.

Until Fields is back, a Bears defense missing three starters in the secondary will face the possibility of being on the field too long and being exposed by opposing offenses.

The bottom line is less complementary football between the offense and defense.

It becomes much more difficult to play closer games the way the Bears had been doing.

Until and if Fields is back, it will be an utterly boring and mundane conclusion to a 3-9 year.

When the Cincinnati Bengals take on the Kansas City Chiefs in the AFC title game on Sunday night, they’ll be doing it without three of their starting offensive linemen as La’el Collins, Alex Cappa and Jonah Williams will all be sidelined from the game with injuries. The three...
CINCINNATI, OH・15 HOURS AGO
BearDigest

After an interception in the season finale, cornerback Greg Stroman will get a chance to return in the 2023 season.
CHICAGO, IL・2 DAYS AGO
BearDigest

The Indianapolis Colts could have several players available in free agency or otherwise who would interest the Bears.
CHICAGO, IL・14 HOURS AGO
College Football HQ

One analyst has the Vikings defensive lineman landing ideally in Chicago even playing in a scheme he hasn't peformed in well.
CHICAGO, IL・2 DAYS AGO