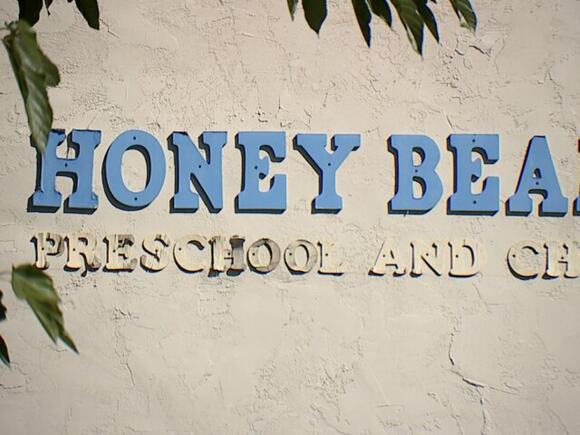 A parent tells ABC 10News she got the news the school would close the day before Thanksgiving a week ahead of time.

“Just gut wrenching inside and just missing the kids that I love," said Jackie Simpson.

Simpson was holding back tears thinking about the students she’s worked with for the past year and a half.

She said her students became family.

"Just that I love them," said Simpson.

It’s not only a hard situation for teachers — it’s impacting parents like Katie Golland.

"We got the news and honestly our first reaction was figuring out what to do with our children," said Golland.

She said she got the news that she would need to find new schools for her two sons a week before Honey Bear was set to close, but that wasn’t the only thing on her mind.

She sprang into action thinking about teachers like Simpson.

"The fact that the teachers were given a week's notice to find a new job, during the holidays, just feels so abrupt and so terrible for the teachers," said Golland.

Knowing the community is coming together for the fundraiser is a great feeling for Simpson.

"I mean just to show how much they cared," she said.

ABC 10News called the school to hear their side of the story and was greeted with this voicemail confirming the closure on November 23.

We also emailed the owners, but have not heard back.

The email sent to Golland blamed hits to the childcare industry, such as higher wages and competition from public programs working with younger and younger children.

“I just didn’t expect it to be just so quickly when they told us. You know, it’s hard to find a job," said Simpson.

Simpson said she has found a part-time job at another preschool.

"My husband and I are happy we found something for the boys, even though we are splitting them up," said Golland.

Nick Piazza is charged with inappropriately touching 3 children. One at a swim school, and the other two at private homes.
VISTA, CA・6 HOURS AGO
ABC 10 News KGTV

A proposal to charge people to use public restrooms in the city of San Diego is receiving mixed reaction.
SAN DIEGO, CA・17 HOURS AGO
ABC 10 News KGTV

The Bistro, located off of National Avenue, opened at the beginning of the month. It is completely operated by students with the California Culinary Arts Institute
SAN DIEGO, CA・4 DAYS AGO
ABC 10 News KGTV

Before Tuesday, when you call 911, an ambulance and firefighters are automatically sent to you. But now, non-life-threatening calls will be triage nurses.
EL CAJON, CA・14 HOURS AGO
ABC 10 News KGTV

A UC San Diego professor is getting national attention for her response to the story of a Massachusetts mother charged with the deaths of her three children.
BONITA, CA・1 DAY AGO
ABC 10 News KGTV

An ER technician with a passion for art dedicated a hallway in Sharp Chula Vista's triage department to first responders with a display of their portraits.
CHULA VISTA, CA・4 DAYS AGO
ABC 10 News KGTV

Transgender woman shares her side of story amid locker room controversy

A transgender woman at the center of controversy over an incident at a YMCA stood before the Santee City Council and community members to tell her side of the story.
SANTEE, CA・5 DAYS AGO
ABC 10 News KGTV

It's been a traumatic week for the Asian-American Pacific Islander community, but the recent mass shootings that have rocked our country aren't stopping many AAPI communities from celebrating.
SAN DIEGO, CA・3 DAYS AGO
ABC 10 News KGTV

San Diego County is working to get a more accurate number of how many people are living on the streets and what resources they need to secure housing.
SAN DIEGO COUNTY, CA・5 DAYS AGO
ABC 10 News KGTV

An 18-year-old man is in custody and faces a murder charge in connection with the death of a Chula Vista man whose body was discovered in Otay Valley Regional Park over the weekend.
CHULA VISTA, CA・20 HOURS AGO
ABC 10 News KGTV

A red panda at the San Diego Zoo managed to briefly escape from an enclosure over the weekend, but zoo officials said the animal came down from a tree on its own.
SAN DIEGO, CA・18 HOURS AGO
ABC 10 News KGTV

The series of recent shootings in California has communities on high alert. So much so, that La Mesa Police responded to what ended up being a false alarm at Lemon Avenue Elementary School Tuesday.
LA MESA, CA・6 DAYS AGO
ABC 10 News KGTV

On Sunday, a handful of Asian American and Pacific Islanders gathered in City Heights to address mental health. They discussed the increase in violence towards their community since the pandemic.
SAN DIEGO, CA・2 DAYS AGO
ABC 10 News KGTV

Owl Rare has been practicing yoga for over a decade now and says it's become a way of life. But Rare admits they didn't always see themselves reflected in the community.
SAN DIEGO, CA・7 DAYS AGO
ABC 10 News KGTV

As SDG&E bills are escalating around San Diego County, some residents are going on a "payment strike."
SAN DIEGO, CA・1 DAY AGO