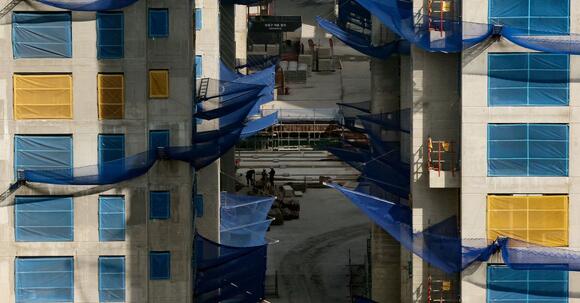 The government has elevated its warning of cargo transport disruption due to the strike to "serious", the highest level in its disruption scale, the transport ministry said on Monday.

The second major strike in less than six months by thousands of unionised truckers for better pay and working conditions was criticised last week by South Korean President Yoon Suk-yeol as taking the nation's logistics "hostage" in the face of an economic crisis.

The export-dependent economy, Asia's fourth-largest, is facing lower-than-expected growth next year, with the central bank downgrading South Korea's 2023 growth forecast to 1.7% from 2.1% previously.

SEOUL, Jan 30 (Reuters) - NATO Secretary-General Jens Stoltenberg urged South Korea on Monday to increase military support to Ukraine, citing other countries that have changed their policy of not providing weapons to countries in conflict following Russia's invasion.
1 DAY AGO
Reuters

TOKYO, Feb 1 (Reuters) - NATO Secretary-General Jens Stoltenberg on Wednesday stressed the importance of NATO's working closely with partners in the Indo-Pacific, saying Europe could not ignore what happens in East Asia because the global security is interconnected.
1 HOUR AGO
Reuters

AMSTERDAM, Jan 31 (Reuters) - The Dutch government on Tuesday called on semiconductor makers in the Netherlands to do more to prevent their chips from ending up in Russia, in violation of international sanctions.
13 HOURS AGO
Newsweek

The video sparked discussions on social media about what kind of weapon could be responsible for the attack.
14 HOURS AGO
Reuters

KYIV, Jan 31 (Reuters) - Ukraine will receive 120 to 140 Western tanks in a "first wave" of deliveries from a coalition of 12 countries, Foreign Minister Dmytro Kuleba said on Tuesday.
16 HOURS AGO
Reuters

Jump or be pushed: German conservatives turn on ex-Nazi hunter over race comments

"The girls from Ukraine and Switzerland simply ran from me like fire," Anna Linnikova told Evening Moscow.
LOUISIANA STATE・14 HOURS AGO
Business Insider

This help line is a growing effort to give Ukraine vital advice on repairs and maintenance as it pushes weapons to their limits.
WASHINGTON STATE・1 DAY AGO
Reuters

BEIJING, Jan 30 (Reuters) - The Chinese foreign ministry said on Monday it was in touch with Prague over President-elect Petr Pavel's scheduled call with Taiwan's President Tsai Ing-Wen.
1 DAY AGO
Reuters

BOSTON, Jan 30 (Reuters) - A wealthy Russian businessman with ties to the Kremlin made tens of millions of dollars trading on secret financial information obtained by hackers about multiple companies before it was public, a U.S. prosecutor said Monday at the start of his trial.
1 DAY AGO
Reuters

LONDON, Jan 30 (Reuters) - Russia told the United States on Monday that the last remaining pillar of bilateral nuclear arms control could expire in 2026 without a replacement due to what it said were U.S. efforts to inflict "strategic defeat" on Moscow in Ukraine.
WASHINGTON STATE・1 DAY AGO
Reuters

SHANGHAI, Jan 31 (Reuters) - China's semiconductor industry has become a key target of the United States, which has imposed a slew of export restrictions targeting several parts of the country's chip sector supply chain as it bids to slow its rival's technological advancement.
WASHINGTON STATE・23 HOURS AGO
Reuters

Jan 30 (Reuters) - Russia on Monday condemned Sunday's drone strike on a military factory in Iran and warned against what it called "provocative" actions that could trigger an escalation in an already tense situation.
1 DAY AGO
Reuters

BEIJING, Jan 31 (Reuters) - China is seriously concerned about a report that the United States has stopped approving licences for U.S. companies to export items to tech giant Huawei, a foreign ministry spokesperson said on Tuesday.
22 HOURS AGO
Reuters

KYIV, Jan 31 (Reuters) - Ukraine said on Tuesday its forces had repelled Russian attacks on a road near the eastern town of Bakhmut, preventing Moscow gaining control of an important Ukrainian supply line.
16 HOURS AGO
Reuters

WASHINGTON, Jan 31 (Reuters) - U.S. Defense Secretary Lloyd Austin's visit to the Philippines this week is expected to bring an announcement of expanded U.S. access to military bases in the country, a senior Philippines official said on Tuesday.
WASHINGTON STATE・2 HOURS AGO
Reuters

Russia's Lavrov urges Israel and Palestinians not to worsen tensions

MOSCOW (Reuters) - Russian Foreign Minister Sergei Lavrov urged senior Palestinian and Israeli diplomats by phone on Sunday to do their utmost to avoid escalating a surge in violence in Jerusalem and the West Bank, his ministry said.
2 DAYS AGO