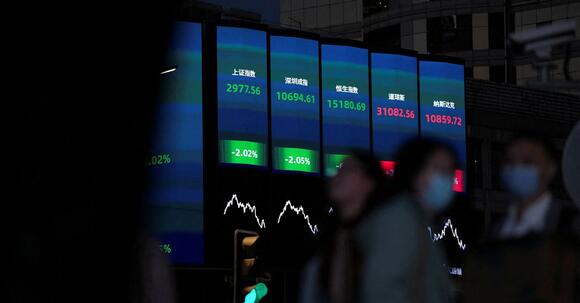 SYDNEY, Nov 28 (Reuters) - Stocks and oil weakened on Monday as rare protests in major Chinese cities against the country's strict zero-COVID policy raised worries about management of the virus in the world's second-largest economy.

MSCI's broadest index of Asia-Pacific shares outside Japan (.MIAPJ0000PUS) was down 0.6%, after U.S. stocks ended the previous session with mild losses.

In China, demonstrators and police clashed in Shanghai on Sunday night as protests over the country's stringent COVID restrictions flared for a third day.

There were also protests in Wuhan, Chengdu and parts of the capital Beijing late Sunday as COVID restrictions were put in place in an attempt to quell fresh outbreaks.

The dollar extended gains against the offshore yuan , rising 0.74% and focus shifts to the open of China's markets later in the Asian morning.

The COVID rules and resulting protests are creating fears the economic hit for China will be greater than expected.

"Even if China is on a path to eventually move away from its zero-COVID approach, the low level of vaccination among the elderly means the exit is likely to be slow and possibly disorderly. The economic impacts are unlikely to be small."

S&P 500 and Nasdaq futures both fell, pointing to possible declines in Wall Street later in the day.

"Mobility data in China is showing the impact of a resurgence in COVID-19 cases," ANZ analysts wrote in a research note Monday. "This remains a headwind for oil demand that, combined with weakness in the U.S. dollar, is creating a negative backdrop for oil prices."

In the United States, a speech by Federal Reserve Chair Jerome Powell in Washington on Wednesday to the Brookings Institute on the economic outlook and the labour market will be closely watched by investors.

Scott Murdoch has been a journalist for more than two decades working for Thomson Reuters and News Corp in Australia. He has specialised in financial journalism for most of his career and covers equity and debt capital markets across Asia based in Hong Kong.

Feb 3 (Reuters) - Social media images purported to be of an emaciated jailed Iranian dissident on hunger strike have caused outrage online as supporters warned on Friday he risks death for protesting the compulsory wearing of the hijab.
WASHINGTON STATE・2 DAYS AGO
Reuters

Feb 4 (Reuters) - Former Russian President Dmitry Medvedev has said the supply of more advanced U.S. weaponry to Ukraine will only trigger more retaliatory strikes from Russia, up to the extent of Russia's nuclear doctrine.
WASHINGTON STATE・1 DAY AGO
Reuters

BEIJING/HONG KONG, Feb 5 (Reuters) - China may respond to the U.S. shooting down its suspected spy balloon after warning of "serious repercussions", but analysts say any move will likely be finely calibrated to keep from worsening ties that both sides have been seeking to repair.
CALIFORNIA STATE・4 HOURS AGO
Reuters

SYDNEY, Feb 6 (Reuters) - Asian shares slipped on Monday after a run of upbeat economic data from the United States and globally lessened the risk of recession, but also suggested interest rates would have to rise further and stay up for longer.
28 MINUTES AGO
Reuters

Feb 5 (Reuters) - China's finance minister and its central bank governor will attend a roundtable with other creditors and some borrowing countries in February in India, IMF Managing Director Kristalina Georgieva said in a CBS' 60 Minutes interview on Sunday.
WASHINGTON STATE・2 HOURS AGO
Reuters

NEW YORK, Feb 3 (Reuters) - U.S. stock bulls are taking heart from a range of market signals pointing to an upbeat year for Wall Street, as equities sit on impressive gains despite worries that the Federal Reserve’s monetary policy tightening may plunge the economy into a recession.
2 DAYS AGO
Reuters

SHANGHAI, Feb 4 (Reuters) - China's foreign ministry said on Saturday that flight of a Chinese "airship" over the United States was a force majeure accident, accusing U.S. politicians and media of taking advantage of the situation to discredit China.
WASHINGTON STATE・2 DAYS AGO
Reuters

(Reuters) - The United States and Russia faced off on Saturday over a World Health Organization report on the humanitarian crisis in Ukraine, with Moscow saying it was politically motivated and Washington calling for it to be swiftly updated.
WASHINGTON STATE・1 DAY AGO
Reuters