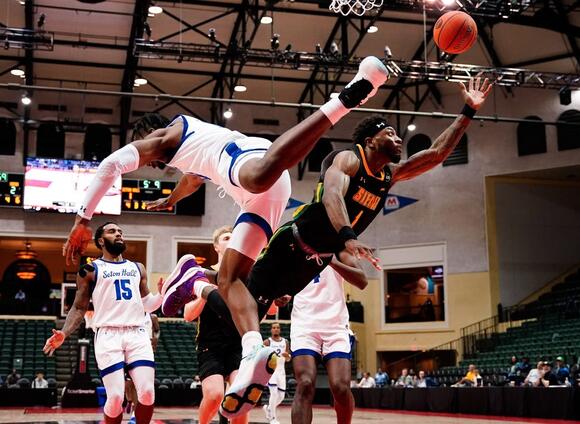 Jackson Stormo finished with 11 points and was vital down the stretch as Siena defeated Seton Hall 60-55 on Sunday night in the third-place game of the ESPN Events Invitational in Lake Buena Vista, Fla.

Seton Hall’s Al-Amir Dawes tied things at 53 with 3:32 left before Stormo’s short jumper just over a minute later gave Siena (4-3) a two-point edge. Stormo also made a free throw with 19 seconds left to widen the margin, and the Saints survived a free-throw competition in the waning seconds to take down Seton Hall (4-3).

Javian McCollum led Siena with 14 points, and Jayce Johnson chipped in 11 to go along with nine rebounds.

Dawes tallied a game-high 15 points and Tyrese Samuel finished with 14, but they were the only two Pirates to score in double figures. Seton Hall struggled immensely from beyond the arc, making just 1 of 9 3-point attempts.

Tray Jackson’s layup capped a 10-4 burst that pulled the Pirates within five with just over 11 minutes left to play. McCollum drained a 3-pointer to push the lead back to eight, but then Seton Hall shifted momentum in its favor.

The Pirates scored nine straight points to claim their first lead since the 10:03 mark of the first half, but Siena never let the game get out of hand before prevailing late.

After trailing early, the Saints turned up the intensity, outscoring Seton Hall 30-14 over the final 13 minutes of the first half to go into the break with an eight-point edge.

Samuel led all scorers with 12 points through the first 20 minutes, but Seton Hall made just 34.5 percent of its field goals.

Johnson’s 3-pointer provided Siena’s only points through the first 5:55 of action, allowing the Pirates to take an early 11-3 advantage. But the Saints responded with an 8-0 run shortly after to pull even at 13-all.

Despite foul trouble, Seton Hall still gets by St. John’s

Al-Amir Dawes scored 18 of his 21 points in the second half as Seton Hall survived significant foul trouble and
SOUTH ORANGE, NJ・23 HOURS AGO
Sportsnaut

The Minnesota Timberwolves will continue a six-game homestand on Friday when they welcome the Orlando Magic to Minneapolis. Orlando comes
MINNEAPOLIS, MN・4 HOURS AGO
Sportsnaut

The Boston Celtics didn’t do much wrong in the opening quarter and breezed to a 139-96 home victory over the
BOSTON, MA・21 HOURS AGO
Sportsnaut

Shohei Ohtani is expected to be the biggest name in MLB free agent history next winter, and the New York
NEW YORK CITY, NY・12 HOURS AGO