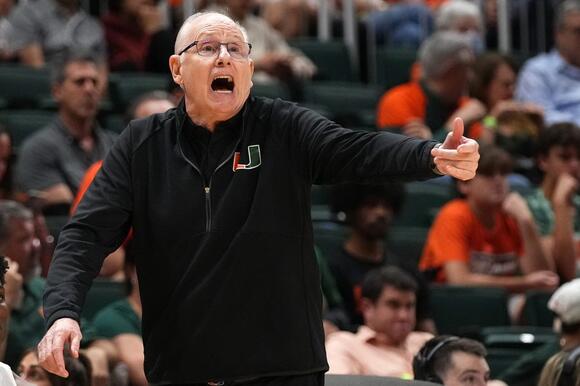 Nijel Pack scored 16 points, leading the Miami Hurricanes to a 66-64 win over the host UCF Knights on Sunday night in Orlando, Fla.

Wooga Poplar added 12 points and Jordan Miller had 11 to help the Hurricanes (6-1).

With 1.4 seconds left and UCF trailing by two points, the Knights’ C.J. Walker could’ve tied the score with two free throws. However, Walker missed his first free throw. He missed the second one intentionally and the ball was batted out of bounds, ending the game.

UCF (5-2) was led by backup point guard Darius Johnson, who scored 22 of his 24 points in the second half. But UCF’s leading scorer, true freshman Taylor Hendricks, was held to eight points. He entered the game averaging 15.8 points.

Miami’s Isaiah Wong was held to eight points, but he made a pair of spectacular plays in the first half. First, the 6-foot-4 guard soared over 6-foot-10 Lahat Thioune to put down a dunk off a lob pass from Bensley Joseph. Then, Wong took two dribbles and beat the first-half buzzer with a 40-foot swish from the UCF logo.

Early on, the Knights led 17-15, when the Hurricanes went scoreless for 6:34, a drought that was snapped by Poplar’s fortuitous 3-point bank shot.

Poplar followed that with an emphatic dunk. Miami finished the half by making six of its final seven shots, taking a 32-26 lead into the break.

But the Knights couldn’t get any closer.