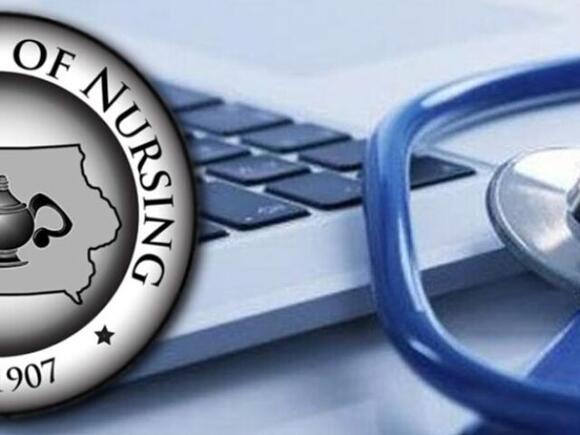 An Iowa nurse accused of using a bed sheet to tie an elderly woman to her wheelchair will keep her license but must complete 30 hours of education on patient management.

Last month, the Iowa Board of Nursing filed a combined statement of charges and final order in a case involving Valerie Archer of Corydon. According to the board, Archer committed an act that may have adversely affected the health of a patient.

The board alleges that while Archer worked at an unspecified care facility on Dec. 11, 2021, she “placed a sheet around a resident” in a manner that acted as a restraint.

The board documents don’t provide any other details on the incident. However, care-facility inspection reports from the Iowa Department of Inspections and Appeals indicate the incident took place at Corydon Specialty Care and was treated as a case of dependent adult abuse.

The inspections department believed the incident was serious enough to warrant a citation for resident abuse, and the federal Centers for Medicare and Medicaid Services fined the home $41,605.

State inspectors alleged a Corydon Specialty Care resident who suffered from dementia and had severe cognitive issues had been “tied with a sheet while in a wheelchair” to keep her restrained, and that this was done purely for the convenience of the staff.

A worker at the home had reported that Archer and another nurse were in the dining room, standing next to a female resident in a wheelchair, and complaining they weren’t going to get all their work done that shift. The two nurses requested someone bring them a bed sheet. The worker later saw the resident in the dining room tied to her wheelchair with a bed sheet that encircled her legs and chest, preventing her from standing up.

Another employee later reported seeing the woman struggling to free herself and told inspectors that she and a colleague had difficulty loosening the knots on the sheet. A photo was taken by one of the home’s employees, reportedly showing the woman with the sheet wrapped between and around her legs.

The two accused nurses denied tying the resident down, saying the woman may have tangled herself up in the sheet after they placed it on top of her, according to the inspectors’ report.

In talking to state inspectors, the administrator allegedly acknowledged the worker who took the photo was asked to delete it, and she added that she had not kept a copy of the photo as evidence.

The Iowa Board of Nursing is requiring Archer to complete 30 hours of education in managing difficult patients. Her license remains active.

Other nursing board actions

Other Iowa nurses recently sanctioned by the board include:

— Kellie Jo Allison of Ankeny , who was criminally charged with stealing patient medications. Allison was working at Martina Place Assisted Living as the director of nursing. She was accused in February 2020 of diverting hydrocodone and oxycodone pills from two residents and then altering medical records to conceal the theft, according to court records.

In August 2021, Allison was criminally charged with two counts of drug diversion and one count of tampering with medical records. Two months later, she pleaded guilty to one count of obtaining a drug by fraud or deceit and the other charges were dropped. She was fined $1,000 placed on probation for two years. If she successfully completes the terms of her probation, the court record will be expunged pursuant to a deferred judgment granted by the court.

Last month, the Iowa Board of Nursing filed a combined statement of charges, settlement agreement and final order against Allison alleging she had been convicted of an offense that directly relates to the profession of nursing. As part of that settlement, Allison agreed to surrender her license. She may apply for reinstatement in one year.

— Rebecca George of West Burlington , who was charged in April with failing to properly document the disposal of patient medications; committing an act that may adversely affect the health of a patient; and failing to assess or document the status of a patient.

The board alleged the violations took place at an unspecified care facility where George worked in 2019 and 2020. The board placed George’s license on probation for six months and ordered her to complete 30 hours of continuing education on medical documentation.

In 2017, the board charged her with having “spilled some liquid morphine” intended for a nursing home resident and with having failed to report the matter. The board ordered her to complete five hours of education on client care.

In January 2019, George was arrested for domestic abuse assault. The charge was dismissed by prosecutors after she completed substance abuse treatment.

— Stacey Tams of Council Bluffs , who was charged by the board with knowingly allowing someone to unlawfully practice nursing. According to the board, Tams was working for an unidentified “health system” in July 2019 when the health system acquired an unidentified clinical practice. That practice had an individual on staff who had graduated from nursing school but was not licensed.

Tams allegedly allowed the individual to practice as a registered nurse, knowing they were not licensed. At the time of the alleged incident, Tams was employed by Methodist Physicians Clinic of Council Bluffs, according to the website of Methodist Health System.

A revived legislative proposal would allow convicted defendants — including an Omaha man convicted for a 1999 killing — to file a motion for a retrial based on newly discovered evidence.
OMAHA, NE・8 HOURS AGO
KMTV 3 News Now

The Iowa Board of Pharmacy has fined an online pharmacy $10,000 and temporarily barred it from filling prescriptions for Iowa patients.
IOWA STATE・5 DAYS AGO
KMTV 3 News Now

The cannabis industry is getting ready for recreational cannabis sales to begin in Missouri on February 6.
MISSOURI STATE・23 HOURS AGO
KMTV 3 News Now

For years now classrooms and school board meetings have become the front lines of a clash between career educators and conservative parents.
NEBRASKA STATE・2 DAYS AGO
KMTV 3 News Now

Opponents of abortion took to the streets in front of the capitol Saturday for the annual Walk for Life, the first event since the Supreme Court overturned Roe v. Wade last summer.
NEBRASKA STATE・5 DAYS AGO
KMTV 3 News Now

He knew returning to the family farm was an option when he got out. He also knew he needed to learn modern farm management and business practices to succeed in competitive modern agriculture.
BARTLETT, NE・5 DAYS AGO
KMTV 3 News Now