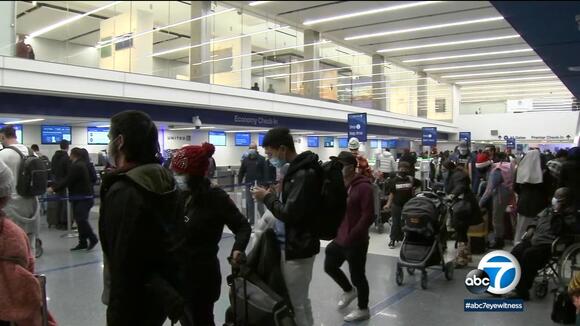 Los Angeles International Airport was expecting Sunday to be the busiest day of a long Thanksgiving weekend that was already predicted to see a record number of Southern California travelers. "Today is expected to be the busiest day of the Thanksgiving holiday travel period at LAX, with about 215,000 guests using the airport. Make sure you check your flight status, pre-book parking at parking.flylax.com and arrive early for a smooth journey!" airport officials tweeted Sunday morning. Hollywood Burbank Airport issued a similar advisory for travelers. A record 4.5 million Southern California residents were expected to travel this holiday period, up 2.5% from last year, contributing to what the Automobile Club of Southern California projected to be the third-busiest Thanksgiving travel period on record nationally. "Despite inflation and high gas prices, consumers are continuing to prioritize valuable and memorable time with family and friends through coming together at the holidays," Heather Felix, the Auto Club's vice president for travel products and services, said in a statement. "Our members still want to make up for their delayed or missed opportunities to travel during the pandemic." NFLer Odell Beckham Jr. escorted off LAX-bound plane in Miami after report of 'medical emergency'

Odell Beckham Jr. was escorted from a Los Angeles-bound flight in Miami after officers responded to a "medical emergency."

According to the Auto Club, 3.9 million Southern Californians were expected to drive to their destinations, while 542,000 were expected to travel by air and 109,000 to take other modes of transportation, such as buses, trains or cruises. The most popular destinations for Southern California travelers were anticipated to be Las Vegas, San Diego, the Grand Canyon/Sedona, Yosemite and Mexico cruises. Nationally, Anaheim was expected to be the second most popular travel destination, behind Orlando, Florida.= Copyright 2022, City News Service, Inc.

The San Fernando Valley can experience a little taste of Japan at Mitsuwa Marketplace in Northridge.
2 HOURS AGO
ABC7

If you've been making plans to take a trip to a local museum, you may want to mark this day on your calendar.
20 HOURS AGO
ABC7

Port of Los Angeles and Long Beach continue to go green, looking toward a climate-friendly future

The massive Port of Los Angeles -- with its ships, trucks and cranes -- has gone green. Here's how the sprawling operation switched to clean energy so quickly.
LONG BEACH, CA・2 DAYS AGO
ABC7

A radio-collared mountain lion known as P-81 was found dead on Pacific Coast Highway in the western Santa Monica Mountains after likely being struck by a vehicle.
SANTA MONICA, CA・6 HOURS AGO
ABC7

Those killed by a gunman who opened fire at a Monterey Park dance hall are being remembered by friends and family for the zest for life that brought them out that night to celebrate the Lunar New Year.
MONTEREY PARK, CA・9 HOURS AGO
ABC7

Sometimes, it takes a while to get the perfect selfie. Well, a bear in Colorado struck a pose and took about 400 "bear selfies" on a trail camera.
BOULDER, CO・3 HOURS AGO
ABC7

"Blanco" is believed to be the only white dolphin known off Southern California.
DANA POINT, CA・1 DAY AGO
ABC7

The Monterey Park mass shooting has only sharpened residents' feelings about what makes the tight-knit community so special, and worth protecting.
MONTEREY PARK, CA・1 DAY AGO
ABC7

A driver was taken into custody after leading authorities on a high-speed chase from Long Beach through Orange County Thursday.
ORANGE COUNTY, CA・1 DAY AGO
ABC7

Watch as over 100,000 spectators in Los Angeles' Chinatown celebrate the Year of the Rabbit.
LOS ANGELES, CA・10 HOURS AGO
ABC7

Vice President Kamala Harris traveled to Monterey Park to meet with victims' families days after a mass shooter there killed 11 and wounded at least nine others inside a dance studio.
MONTEREY PARK, CA・1 DAY AGO
ABC7

The nonprofit Hollywood Partnership opened it's new community dispatch center, part of an experiment that could have implications for the entire city of Los Angeles
LOS ANGELES, CA・1 DAY AGO
ABC7

Bravo Toast, which sits at the crossroads of West Hollywood and Beverly Hills, is a self-proclaimed elevated fast-casual breakfast and lunch spot - and it's serving up an avocado toast that makes the most carb-conscious Californians fall in love.
WEST HOLLYWOOD, CA・2 HOURS AGO
ABC7

California is currently the only state in the country that doesn't regulate who can and cannot call themselves an athletic trainer.
BURBANK, CA・7 HOURS AGO