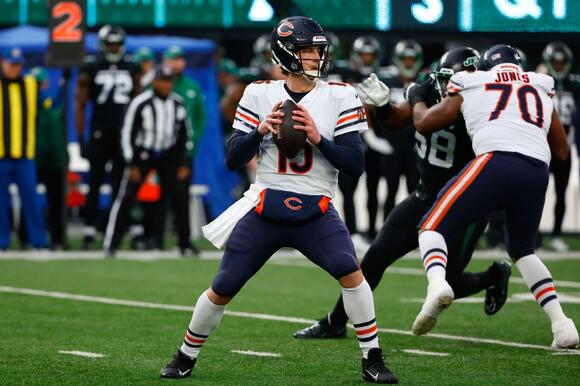 Chicago Bears quarterback Trevor Siemian , who started against the New York Jets in place of an injured Justin Fields , said he was "embarrassed" to sustain an injury during pregame warm-ups that momentarily put his status for Sunday's game in question.

"Honestly, I'm more embarrassed to get an injury," Siemian said. "I've got guys in there that are playing -- what are we at? Week 12, 13? -- going through hell and I had like a noncontact thing show up. Not ideal, but everybody's going through something at this point of the year."

Siemian said he felt something "flare up" in his oblique area while he was throwing pregame and received medicine, not an injection, in the locker room to help him play through the pain.

The Bears initially designated Siemian as their backup quarterback while announcing Nathan Peterman would start against the Jets. Peterman was elevated from the practice squad to the active roster on Saturday.

Ultimately, Siemian started and played the entirety of Chicago's 31-10 loss and completed 14 of his 25 passes for 179 yards, a touchdown and an interception. While he admitted that his oblique injury bothered him "a little bit" during the game, Siemian said it did not hinder his ability to function in the offense.

"I could play," he said. "I could do everything I needed to do."

Fields, who was questionable against the Jets because of a separated left shoulder, also warmed up at MetLife Stadium but was not cleared by the Bears' medical staff to play in Sunday's game. Siemian said he did not know officially until Sunday morning that he would be starting but knew there was "a good chance" given Fields' shoulder injury and limited reps in practice.

"The medical staff didn't clear him to play today," coach Matt Eberflus said. "Justin didn't feel he could protect himself and perform the way he wanted to perform. It's about mobility and strength in his left arm. We'll take it day by day."

It’s the sound of hearts breaking across Philadelphia and the state of Pennsylvania… and let’s be honest, everywhere else in the country, too. Eagles quarterback Jalen Hurts made a very rare public appearance with his girlfriend Bryonna “Bry” Burrows after the NFC Championship game this past Sunday, which is a surprise to many fans, as he is extremely private about his life outside of football.
PHILADELPHIA, PA・1 DAY AGO
NBC Sports

Tom Brady has already received an offer to make a football comeback. But it's not from an NFL team. Hours after Brady announced he was retiring from the NFL on Wednesday, the Arena Football League revealed plans to return in 2024 following a four-year hiatus. So, of course, the AFL...
4 HOURS AGO
ESPN

The GOAT is hanging them up ... again. After 23 seasons, seven titles and countless records, Brady got congratulations from around the sports world.
TAMPA, FL・11 HOURS AGO
ESPN

Kris Richard, whom the New Orleans Saints promoted from defensive backs coach to co-defensive coordinator last season, will not return to the team, a source confirmed to ESPN.
ATLANTA, LA・1 HOUR AGO
ESPN

'People don't realize how hurt he was': Patrick Mahomes battles through injury to put Chiefs in SB

Though hobbled by a high ankle sprain, Patrick Mahomes came through for the Chiefs when they needed him, with perhaps the signature moment of Sunday's AFC Championship Game coming on the QB's final snap.
KANSAS CITY, MO・2 DAYS AGO
ESPN

Doug Kezirian gives his insight into the betting market for Super Bowl LVII MVP, including how to approach the odds of Jalen Hurts and Patrick Mahomes winning the award.
KANSAS CITY, MO・2 DAYS AGO
ESPN

Williams was the first Black quarterback to win the Super Bowl, changing a narrative that Black QBs couldn't lead a team to a title while becoming a folk hero in the process.
ALABAMA STATE・13 HOURS AGO
ESPN

Dolphins quarterback Tua Tagovailoa has cleared the concussion protocol more than one month after entering it.
MIAMI, FL・7 HOURS AGO
ESPN

Rutgers announced Wednesday that it has hired Pat Flaherty, who was OL coach for the Miami Dolphins in 2019 and a member of two Super Bowl-winning New York Giants' staffs, as its new offensive line coach.
NEW BRUNSWICK, NJ・5 HOURS AGO
ESPN

Panthers owner David Tepper insisted on Tuesday he's doing what he can to break up the "old boys' network'' in the NFL.
CHARLOTTE, NC・1 DAY AGO
ESPN

Ohio State offensive coordinator Brian Hartline will have an opportunity to call plays this spring, but coach Ryan Day told reporters on Wednesday he won't decide if he's going to relinquish the play-calling duties this fall for another "few months."
COLUMBUS, OH・7 HOURS AGO
ESPN

Hundreds of millions of dollars will be bet on Super Bowl LVII. David Purdum tracks the biggest bets to the wackiest wagers here.
KANSAS CITY, MO・10 HOURS AGO
ESPN

Pro Football Hall of Fame executive Bobby Beathard has died at the age of 86.
FRANKLIN, TN・2 HOURS AGO
ESPN

Our experts give their instant reaction to the opening spread and total for Super Bowl LVII between the Philadelphia Eagles (14-3) and the Kansas City Chiefs (14-3).
KANSAS CITY, MO・2 DAYS AGO
ESPN

Kyle Shanahan says he doesn't see "any scenario" where Jimmy Garoppolo will return to the 49ers in the 2023 season.
SAN FRANCISCO, CA・3 HOURS AGO
ESPN

With NFL free agency just around the corner, we dig into the decisions every team has to make. Which quarterbacks could be on the move?
1 DAY AGO
ESPN

Liz Loza sifts through some of the most potentially impactful free agents and those who could be traded or cut, then provides her perfect destination for fantasy purposes.
WASHINGTON STATE・1 DAY AGO
ESPN

Former Panthers coach Matt Rhule is seeking money he believes the team owes him after he was fired in October, a source confirmed.
CHARLOTTE, NC・10 HOURS AGO
ESPN