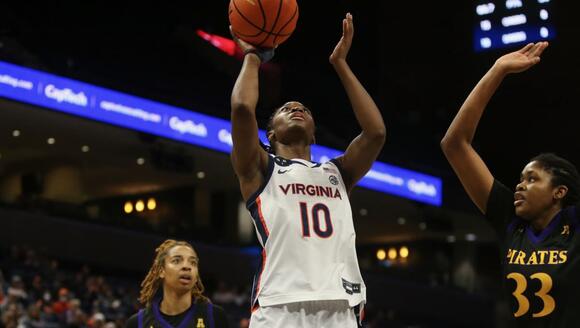 Based on the way the Cavaliers rebounded the ball, you would never have guessed that they were playing their fourth game in the last eight days. Using a staggering 56-25 rebounding advantage, Virginia pulled away from East Carolina in the second half for a 72-50 victory in the Cavalier Classic on Sunday afternoon at John Paul Jones Arena.

Virginia attacked the offensive glass early and often to grab an early lead. The Cavaliers collected seven offensive rebounds and scored nine second-chance points in the opening quarter, but only led 14-11 thanks to a 4-0 run by ECU to end the first period.

The Pirates continued that run early in the second, as UVA turned the ball over on back-to-back possessions leading to easy transition buckets for East Carolina. UVA had 30 turnovers as a team for the game and ECU scored 22 points off of those takeaways, but Virginia was able to overcome that sloppy ball security with its rebounding advantage.

The momentum swung back in favor of the Cavaliers midway through the quarter as they put together a rare five-point possession. Taylor Valladay drove to the basket for a layup plus a foul. She missed the ensuing free throw, but got her own rebound and fed McKenna Dale for a three-pointer. Sam Brunelle followed that up with another second chance bucket on the next trip down to cap a lightning-fast 7-0 run for Virginia over just 48 seconds.

ECU again finished the quarter strong, though, making four of its last five field goals to cut the deficit back to six points after Virginia had led by as many as 11 at 28-17. Danae McNeal kept the Pirates close with some crafty finishes at the basket, tallying 10 first-half points to lead all scorers.

UVA outrebounded ECU 27-15 in the first half, including a 12-8 edge in offensive boards, which led to a substantial 19-6 advantage in second-chance points for the Cavaliers. Virginia had balanced scoring in the first half with four different players recording at least five points.

There were 20 combined fouls called in a whistle-heavy first half. The refs called an even tighter game in the third quarter with a combined 15 fouls called in that ten-minute period. Virginia dealt with the tight officiating better than East Carolina, shooting 7/13 from the floor and holding ECU to a dismal 14.3% shooting percentage to win the quarter 22-7, turning what was a six-point contest at halftime into a 53-34 blowout entering the fourth quarter.

Mir McLean was the catalyst for UVA's explosion in the third quarter, registering six points on a perfect 3/3 shooting and four rebounds in the third period alone. The former UConn transfer posted her second-consecutive double-double, finishing with 11 points, 14 rebounds, and four steals.

The Cavaliers continued to win the rebounding battle in the fourth quarter and finished with a game-changing 25-6 advantage in second-chance points. Sam Brunelle added nine points in the fourth quarter and ended up leading UVA in scoring with 15 points on 5/7 shooting. Coming into the game, McKenna Dale was a combined 0/15 from three-point range. She finally ended her drought on Sunday, draining three three-pointers and finishing with ten points and eight rebounds.

Up next, Virginia will hit the road and play at Penn State on Wednesday at 7pm as part of the ACC/Big Ten Challenge.

The Orange knocked down 12 threes and handed the Cavaliers their third-straight loss on Thursday night in Syracuse
SYRACUSE, NY・5 HOURS AGO
Cavaliers Now

Four Candidates to be Virginia's Next Wide Receivers Coach

Beekman was excluded from the 15-player watch list for the 2023 Naismith Defensive Player of the Year
CHARLOTTESVILLE, VA・4 HOURS AGO
Cavaliers Now

See the full schedule of UVA sporting events for the upcoming week, including how to watch the Hoos online
CHARLOTTESVILLE, VA・2 DAYS AGO