‘Yellowstone’: Jen Landon’s Post Has Fans in a Frenzy About Possible Episode 4 Spoiler 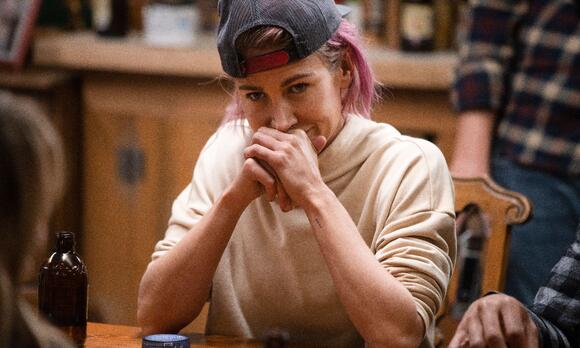 “Yellowstone” star Jen Landon recently posted a photo on Instagram of her in character as Teeter, and fans are wondering if her caption could be a potential episode 4 spoiler.

“It’s branding season on an all new episode of Yellowstone,” she wrote in the caption. Now, will they be branding cattle, or ranch hands? That is the question. Is there anyone new on the ranch to warrant a branding? Not that comes to mind, but who knows what episode 4 will bring . My theory: they’ll be herding in all the cattle or getting new cattle in for branding, and the Duttons are going to continue to grow the ranch until they can’t anymore.

In the comments of Landon’s photo, friends and fans showed her endless support. “Doesn’t get any better,” replied Eric Nelsen, who starred briefly on Taylor Sheridan’s other show, “1883.” One fan commented, “Every episode needs more Teeter,” while another wrote, “Your character just keeps getting better and better!!!”

Additionally, in a comment that looks suspiciously like an inside joke, “Yellowstone” photographer Emerson Miller replied, “You better FaceTime me in the next 48 hours wearing a frog pajama or else I’ll marry you.” We’re just going to leave that one here.

Previously, she’s posted a new Teeter photo for every new episode. In the first one for the premiere, “Teeter gets classy,” she wrote. The photo was of her as Teeter in a sharp button down embroidered with the Yellowstone Ranch logo and a smart felt cowboy hat and sunglasses. In the photo anticipating episode 3 Teeter is wearing her cowboy hat again with a pink button down and holding a shot of whiskey. This is most likely a still from the bar scene at the end of the episode.

Any way you slice it, Teeter is definitely one of the most fun aspects of “Yellowstone.” Jen Landon does a great job embodying her wild character, which just goes to show the range of her talent.

But with all this hype around episode 4, what are fans expecting from the “Yellowstone” stars? The official synopsis for the episode, titled “Horses in Heaven,” claims that John is stirring up something in the capitol, while Jamie and Beth’s feud reaches a boiling point.

Fans took to Reddit to discuss theories , with some hoping this means an end to Beth and Jamie’s petty feud. “Hopefully ‘boiling point’ means ending because the Beth/Jamie rivalry has gotten stale,” one fan noted. “Remember when Jamie almost made Beth blow her brains out? Now they just shit-talk each other.”

It seems the wind has gone out of the Beth/Jamie sails for fans, meaning they’re getting kind of tired of their hatred for each other. While some fans hope for peace between them, others think death is on the horizon for one or the other.

The post ‘Yellowstone’: Jen Landon’s Post Has Fans in a Frenzy About Possible Episode 4 Spoiler appeared first on Outsider .

They need a storyline more exciting than Beth and Jamie acting like wild animals, John sleeping with a chick old enough to be his granddaughter! Definitely tired of Kacee’s wife always bring a victim!!! Not impressed with this season so far!!

Love Teeter. I am definitely bored with the Beth and Jamie feud.

Over the weekend, Yellowstone star Cole Hauser took a break from the chill of Montana’s mountains to head to Disney World with his family. In a new photo from Disney’s Animal Kingdom, however, the 47-year-old actor looks nothing like his beloved character Rip Wheeler, and it’s left fans of the series totally shocked.
MONTANA STATE・1 DAY AGO
Outsider.com

Recently, Yellowstone‘s Teeter actress Jen Landon made a life-changing decision about her living situation. And, looking back, she credits the decision to her Yellowstone costar Ryan Bingham. Speaking with Truck Camper Magazine, Jen Landon said that years of “itchy feet” led her to purchase a Capri Camper. The unit...
TEXAS STATE・16 HOURS AGO
Outsider.com

It’s very rare that Yellowstone fans get to see Cole Hauser‘s Rip Wheeler anywhere but on the Dutton Ranch. However, with the show on hiatus until summer 2023, the 47-year-old actor ditched his character’s leather-fringed chaps and cowboy hat completely, instead taking a fun family trip to Disney, and making a special stop in Animal Kingdom’s Pandora. See the Yellowstone star’s photos below.
MONTANA STATE・2 DAYS AGO
Outsider.com

It’s been nearly 20 years since Keanu Reeves brought us the now cult-classic film Constantine. When the 2005 film hit the silver screen, fans of the comic book Hellblazer for which Constantine was based flocked to the theaters. However, the Keanu Reeves-led action movie didn’t make huge waves throughout the entertainment industry during its initial release.
2 DAYS AGO
Outsider.com

NFL broadcaster Tony Romo made a strange and head-scratching mistake by almost saying a certain word during the Chiefs-Bengals game. The verbal miscue caught the attention of plenty of fans around the league, and eventually the attention of Shannon Sharpe who weighed in on the debate in a humorous way.
CINCINNATI, OH・2 DAYS AGO
Outsider.com

Four men from Pennsylvania are facing charges after police allege that earlier this month, they sprayed a woman with urine from a female deer. The odd incident occurred in the parking lot of a Walmart near Gettysburg, Pennsylvania, earlier this month. According to reports, 18-year-old Brian James, 18-year-old Colby Fitzgerald,...
GETTYSBURG, PA・2 DAYS AGO
Outsider.com

Professional skier Kyle Smaine, winner of the 2015 Freestyle Ski and Snowboarding World Championships, died in a horrific ski accident Sunday, his family confirmed. The skier was caught in a backcountry avalanche triggered near a Japanese ski resort. According to reports, five skiers found themselves trapped in an avalanche on...
2 DAYS AGO
Outsider.com

It’s Monday. We’re still coming down from that fantastic Bengals-Chiefs finish. And finally, the ears stopped ringing from all that Tony Romo shouting. The pitch of Romo’s voice kept growing higher throughout the game. And NFL fans viewing at home began noticing that Tony Romo also was speaking nonsense.
KANSAS CITY, MO・2 DAYS AGO
Outsider.com

This unidentified NFC coach apparently was trying to be funny with a comment about Patrick Mahomes. Still, you don’t often see the word “flopped” adjacent to the name of one of the most dynamic quarterbacks in the NFL. Let’s go back to the final seconds of the...
CINCINNATI, OH・1 DAY AGO
Outsider.com

Jake DeArruda, who is the latest champion on Jeopardy!, has been taking some potshots at host Mayim Bialik. One of fhem had to do with who would be hosting during DeArruda’s tape week. He said that he and other contestants learned who their host would be. Once they found out it would be Ken Jennings, DeArruda said that “everyone collectively cheered” upon hearing Ken’s name.
VERMONT STATE・2 DAYS AGO
Outsider.com

While the Philadelphia Eagles were getting their trophy and celebrating – Terry Bradshaw represented the FOX broadcast on stage. Turns out, fans didn’t like it too much. The NFL Hall of Famer caused all kinds of comments to be made online. Terry Bradshaw has been around a few...
PHILADELPHIA, PA・2 DAYS AGO
Outsider.com

After 40,000 gallons of sewage and water overflowed into a church parking lot in Portland, Oregon, officials had their hands full. According to local reports, the stomach-churning event occurred on Monday, Jan. 23rd, near the city’s intersection of Southwest Jefferson and 18th Avenue. Later, the city officials released a...
PORTLAND, OR・2 DAYS AGO
Outsider.com

Jeopardy! fans can be some of the most fickle when watching the show and they have problems with Jake DeArruda. He’s the current champ on the show. There are some fans who are calling DeArruda “unwatchable.” Ouch, that smarts! But DeArruda, who comes from Ludlow, Vermont, is on a roll. After beating Troy Meyer last week, DeArruda has won three straight games as of Tuesday, January 31.
VERMONT STATE・12 HOURS AGO
Outsider.com

One woman was taken for the ride of her life after a ziplining excursion turned into bungee swinging. However, everyone seemed to be in on the joke except her. In the now-viral video, users watch as the woman prepares herself for ziplining. But, unbeknownst to her, her friends have a hilarious, albeit cruel, plan for her instead. Check out the video below.
2 DAYS AGO
Outsider.com

Cindy Williams played the cheerful Shirley Feeney for eight seasons on Laverne & Shirley opposite Penny Marshall. Williams, who died on Jan. 25 at 75 years old, is being remembered by fans all over the world. She portrayed the Shotz Brewery worker in a hilarious way. The antics of Shirley and her friend, Laverne DeFazio, played by Marshall, kept people tuning in week in and week out.
2 DAYS AGO
Outsider.com

Tom Brady announced his retirement Wednesday after 23 seasons in the NFL. Brady spent the first two decades of his Hall of Fame career with the New England Patriots, where he won six of his seven Super Bowl championships. Team owner Robert Kraft and head coach Bill Belichick, who selected Brady in the sixth round of the 2000 NFL Draft, issued statements on his retirement.
14 HOURS AGO
Outsider.com

After Surviving Brutal Grizzly Bear Attack, Wrestler is Returning to the Ring

It’s been three months since Northwest College wrestler Brady Lowry survived a grizzly bear attack thanks to the bravery of his teammate and friend, Kendell Cummings. They, alongside two other wrestling mates, were set upon by a grizzly while hiking outside Powell, Wyoming this past October 15. The bruin attacked Brady first, but Kendell immediately charged the bear to save his friend. Both young men would require significant medical attention and recovery, and through it all they’ve had one thought on their minds. And no, it’s not grizzly bears. It’s getting back out on the mat.
POWELL, WY・1 DAY AGO
Outsider.com

Now that Tom Brady is officially out of the game, NFL attention turns to Aaron Rodgers. What will he do? Well, he’s currently treasing about playing for a former coach. That’s why the New York Jets offer such a soft and lucrative landing spot for the 39-year-old Rodgers. The Jets have hired Nathaniel Hackett, the former Denver Broncos head coach, to be the team’s offensive coordinator. And Hackett worked the same job with the Packers from 2019-21.
GREEN BAY, WI・20 HOURS AGO
Outsider.com

Top 10 Most Brutal Shark Attacks Over the Past Century

Sharks are some of the most misunderstood animals on the planet. But this doesn’t make shark attacks any less horrific, as the most brutal instances from the last century show. Statistically speaking, it is more common to be struck by lightning than it is attacked by a shark. Things...
CALIFORNIA STATE・2 DAYS AGO