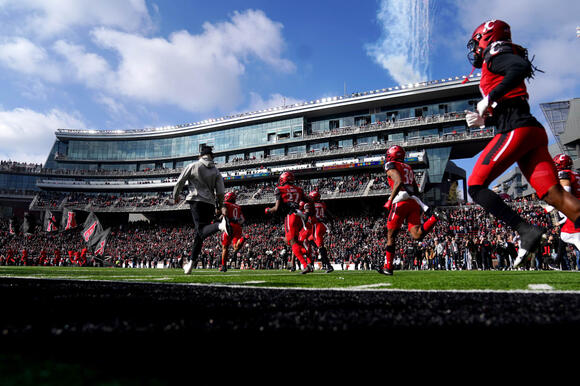 Cincinnati is entering the coaching wilderness this offseason.

CINCINNATI — The Wisconsin Badgers are hiring UC head coach Luke Fickell as their new head coach . Now, the Bearcats must nail his replacement to avoid a bad start in the Big 12, one of the best conferences top-to-bottom in the country.

The coaching search will be vast and wide-searching, here are some names that could make sense to replace Fickell.

The three top coaches remaining on the Bearcats staff would all be decent options to guide UC into a new conference. Coombs has deep connections in Cincinnati as a native and HS coach dating back to the early 80s.

He is already the Bearcats interim head coach for the unannounced bowl game.

Guidugli is one of the great Bearcats football icons ever, owning multiple passing records, with more passed up by Desmond Ridder.

With ten years of coaching experience at Central Michigan and Cincinnati, he knows what this team is all about.

Defensive coordinator Mike Tressel is on his second coaching stint at Cincinnati and has extensive experience as a Power Five coach. He's sharpened the Blackcats defense over the last few years. Tressel is due for a good head coaching opportunity and could get one in Clifton.

Primetime would be the splashiest hire by far, but also could be the best. Sanders just led Jackson State to its first-ever undefeated season and did it with the No. 1 2022 recruit in Travis Hunter. He played for the Cincinnati Reds and could shoot UC into another stratosphere with his recruiting/coaching charm.

Hartline is the wide receivers coach at Ohio State and the man behind a dominant position group over the last few years. He can recruit very well in Ohio and bring a youthful energy to Clifton.

Candle is one of the best coaches in Toledo history and has the Rockets back in the MAC Championship Game this season (52-32 overall record).

He is a great talent developer and knows the ins and outs of midwest recruiting battles. Candle also took over at Toledo when Matt Campbell left for Iowa State with little drop-off in success.

Golash is a streaking hot name in coaching circles after leading Tennessee to astounding offensive numbers this season as the Vols' play-caller. He's coached at OSU, UCF, Toledo, Iowa State, and now Tennessee over the last 20 years.

Bonus: Michigan defensive coordinator Jesse Minter also makes sense as a target. He is the son of former UC head coach Rick Minter and was on staff from 2007-08.

Minter's in the running for the Broyles Award (nation’s top assistant) as the head of a dominant Wolverines defense this season.

Cincinnati is ready to roll for Big 12 play.
CINCINNATI, OH・17 HOURS AGO
All Bearcats

Cincinnati has a trio of players showing off their skills in Mobile, Alabama.
CINCINNATI, OH・31 MINUTES AGO
All Bearcats

It's recruiting season in college football.
CINCINNATI, OH・23 HOURS AGO
All Bearcats

The rookie safety played a huge role in the Chiefs win.
CINCINNATI, OH・1 DAY AGO
All Bearcats

The Bearcats are raising their athletic prowess to a Power-Five level.
CINCINNATI, OH・15 HOURS AGO
All Bearcats

One Bracketology site has Cincinnati pegged with no chance to make the field unless they win the AAC Tournament.
CINCINNATI, OH・1 DAY AGO
All Bearcats

The consistent force was lights out in UC's lone game last week.
CINCINNATI, OH・1 DAY AGO
All Bearcats

The brothers aren't rooting for each other over the next two weeks.
CINCINNATI, OH・1 DAY AGO
All Bearcats

The business is now one of UC athletics' biggest sponsors
CINCINNATI, OH・1 DAY AGO