Bears Scrambling to Find a QB 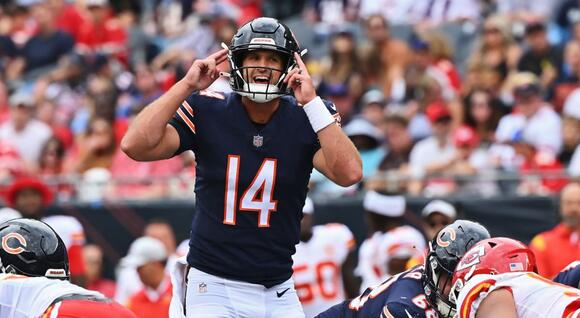 The Bears made Justin Fields inactive, then backup Trevor Siemian was injured in warmups so Nathan Peterman starts.

The Bears let Justin Fields stretch and do some running and throwing at New Jersey Sunday and then waved him off for Sunday's game.

Fields is inactive and Trevor Siemian was to  get his first Bears start at quarterback in place of Fields, whose left shoulder injury is still too painful to allow him to play. Nathan Peterman was promoted to the 53-man roster on Saturday as backup QB and according to offensive coordinator the emergency QB is running back David Montgomery.

As it turns out, Peterman will start.

Siemian suffered an oblique injury in warmups and had a pain-killing shot but can't play. He is going to serve as backup.

The Bears medical staff hadn't cleared Fields to play by the time the team got to New Jersey on Saturday.

Fields suffered his injury on the first play of the final drive for the Bears against Atlanta with 1:47 to play as he ran to the sideline and was tackled by Dee Alford.

His left shoulder hit the ground on the play. Fields was on for two more plays—a broken play that was supposed to be a draw by David Montgomery and Fields wound up running it and sliding before being hit on the right shoulder and a game-ending interception.

Fields went through a full week of limited practices and did try to take some team reps in practice during the week.

Peterman has started four NFL games, all for Buffalo. The Bills were 1-3 in those games. He has completed just 52.6% of his passes (71 of 135) and has three TD passes with 12 interceptions.

Peterman did not get practice reps this week as they were split between Fields and Siemian.

why not call smoking Jay Cutler back to finish the season. at least he would be entertaining to watch and listen to. who would know could excite the bears fans.

It doesn’t matter. The Bears season is over. They should give the bench warmers and even the practice squad some reps. They already have the 2nd pick in the draft. But they’ll probably waste that on another trash player soo… 🤷🏿

The early mock drafts held Will Anderson Jr. as a pick for the Bears at No. 1 but now there's a new No. 1 and choice for them.
CHICAGO, IL・23 HOURS AGO