For golfers and by golfers, Golf Monthly inspires and entertains passionate golfers.

Phil Mickelson To No Longer Feature Within The Match 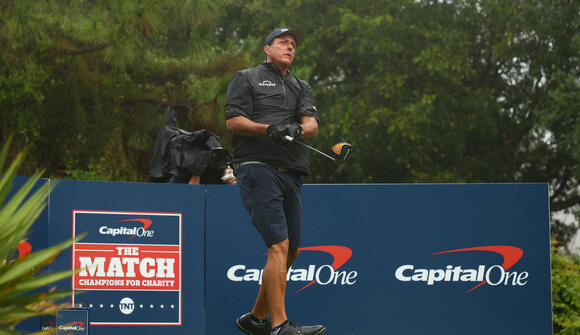 Six-time Major winner, Phil Mickelson, will no longer be involved with The Match after leaving the PGA Tour earlier this year to join the breakaway LIV Golf Series . That's according to the tournament producer, Bryan Zuriff.

For those who don’t know, The Match is a new format within golf that provides fans with exhibition games that include some of the best golfers on the PGA Tour alongside some elite athletes from other sports.

Zuriff expressed his admiration of Mickelson and thanked him for his efforts during his time on the event, but stated that the demise of Mickelson’s affiliation with the event was solely down to the American leaving the PGA Tour , which is involved with The Match.

“Unfortunately, he left the Tour, and that’s unfortunate for doing something like this,” Zuriff said. “I love Phil and he’s been an incredible part of this. But he knows, you know,” Zuriff told GOLF . “He went where he went, and we’re connected with the PGA Tour. So, I mean, this is a PGA Tour event.”

The event teamed up with the PGA Tour for various reasons, but the main one, reportedly, was money. Turner Sports broadcasts the event for a fairly low sum and their recent merger with Discovery+ also played a role. Zuriff stated that approaching LIV was never on the cards as it could have caused conflict.

"What LIV’s spending in a year, and more people watch us than watch them,” Zuriff said. “I think we’re pretty smart in our business plan.”

As The Match approaches its seventh edition, there is no doubt that Zuriff and co are still intact with their initial goal of growing the game within the younger generation and wider audiences, which Mickelson was a vital part of in the event's infancy.

“We probably get more media attention for The Match than any golf event other than Augusta. That’s insane," stated Zuriff, who went on to add “it’s just a bummer because he’s (Mickelson) just been a great partner for so long. But that’s a choice that he made. He understands that when you make those choices, certain things get sacrificed, and this is one of the things that got sacrificed.”

The Match will return on 10th December at the Pelican Golf Club in Belleair, Florida where Tiger Woods and Rory McIlroy will take on Justin Thomas and Jordan Spieth over 12 holes under the floodlights.

Kenny Smith details just how miserable the culture of the Sacramento Kings was, having spent 3 years with them
SACRAMENTO, CA・18 HOURS AGO
OnlyHomers

Tragic news has struck the world of professional wrestling with the word that one of wrestling's biggest stars has lost his life at the age of 38. Celebrity entertainment outlet TMZ, which is known for breaking the news of many deaths of famous people around the world, broke the news of the death of legendary wrestler Jay Briscoe, who has tragically died in a car crash at the age of 38.
1 DAY AGO
Golf Monthly

How Many Tours Does The PGA Tour Run?

WATCH: Max Homa Gets Mic'd Up During Farmers Insurance Open

Fans were extremely positive about the introduction, which saw Homa mic'd up in tournament play
SAN DIEGO, CA・20 HOURS AGO
Golf Monthly

Get to know the American Taylor Montgomery who has risen up the world rankings fast.
LAS VEGAS, NV・1 DAY AGO
Golf Monthly

6 Shots Women Find Tough... And How To Play Them

Max Homa, Collin Morikawa and Justin Thomas are among pros to have mocked 'teegate'
2 DAYS AGO
Golf Monthly

After over a year out with a thumb injury, Beef returned in style as he made the cut at the Dubai Desert Classic
18 HOURS AGO
Golf Monthly

For golfers and by golfers, Golf Monthly inspires and entertains passionate golfers.