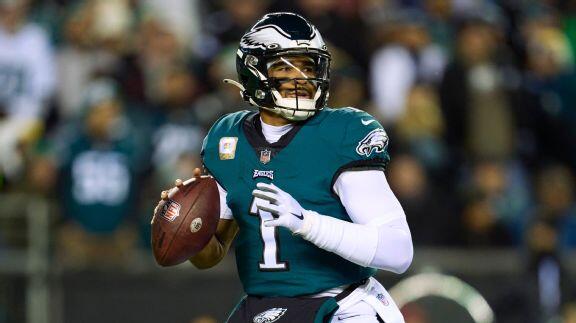 The Green Bay Packers hit the road to face the Philadelphia Eagles on Sunday night. The Eagles (9-1) have the best record in the NFL and sit atop the NFC East division, leading the Dallas Cowboys (8-3) and New York Giants (7-4). They are 6.5-point favorite in this one against a 4-7 Packers team that is coming off a loss to Tennessee.

So, what can we expect from a betting standpoint Sunday night?

The Philadelphia Eagles (-6.5, 46.5) are favorites over the Green Bay Packers ahead of their NFC matchup on 'Sunday Night Football.' Both teams need a victory: The Eagles look to maintain their NFC East lead over the Dallas Cowboys, and Green Bay hopes to keep its postseason hopes alive. What are your thoughts on this matchup, and do you think this will be a trap game for Philadelphia?

Moody: I recommend betting on the under. It's no secret that the Eagles love to run the football. Only the Bears average more rushing attempts per game than Philadelphia. Aaron Rodgers confirmed last week that he has been playing with a broken thumb. The injury has resulted in a decrease in his statistical production. During the Packers' first five games, Rodgers completed 69.7% of his passes with eight touchdowns and three interceptions. He completed only 62% of his passes over the next six, during which he had 11 touchdowns and threw four interceptions. AJ Dillon and Aaron Jones have also played a greater role offensively for Green Bay following the injury. I don't anticipate a high-scoring game, but I think the Eagles will win easily. This Packers team averages only 18.4 points per game. The under is 4-1 in Green Bay's past 5 road games. In addition, the under is 6-2 in Green Bay's last 8 games following a straight-up loss.

Schatz: There is no such thing as a trap game. What exactly are the Eagles supposed to be looking forward to? Next week against Tennessee? Are they already looking forward to the Cowboys? Is the idea that they're going to lose four straight games looking forward to Christmas Eve? That the players will have trouble getting up for a nationally televised game on Sunday night? This game counts, and the Eagles will come to play. So will the Packers, though, and our projected line and total are very close to the Vegas line and total on this game, so I don't recommend playing it.

The NBA season is here. Sign up for ESPN Fantasy Basketball today! Play for free

Jalen Hurts is third in MVP odds (+650) and has thrown for 2,407 yards, 15 touchdowns and just three interceptions this season. He has also rushed 110 times for 447 yards and eight touchdowns. Hurts' passing yards prop is listed at 226.5 yards with a rushing yards prop of 48.5 yards? Do you think the Eagles' offense will find success against the Packers' defense and like Tennessee did last week, and will you take the over on any of his player props on Sunday night?

Schatz: The Green Bay defense is poor against the run, but ironically that's why I'm going to take the under on Hurts rushing yardage. The Packers have been very strong against quarterback rushing with the exception of a few long Josh Allen scrambles in Week 8. They've been easy for running backs to run on and I think the Eagles will have enough success with their backs that they won't need to have as many Hurts designed runs. And the Packers' pass rush doesn't force many scrambles. There have been only 10 quarterback scrambles against the Packers this year, 31st ahead of only Cleveland.

What is your favorite bet for Sunday night?

Moody: Eagles first half, -3.5. I think the Eagles will want to get off to a fast start after losing to the Commanders a few weeks ago and barely defeating the Colts last week. In the first half, Philadelphia leads the league with nearly 18 points, while the Packers rank near the bottom. It would be wise for the Eagles to impose their offensive will on the Packers' defense in order to force them to rely heavily on the passing game. With 33 sacks this season, Philadelphia's pass rush is imposing. It's the third most in the league. In addition, the Eagles have 13 interceptions, which is tied for the most in the league. Additionally, the Eagles must tighten up their running game. The first half of this game could be dominated by Philadelphia if these areas are tightened up.

Myles Garrett is concrete evidence as to why players should never compete in the NFL Pro Bowl.  The Cleveland Browns star suffered a brutal injury during Sunday's Pro Bowl events.  Garrett has been diagnosed with a dislocated toe, per NFL insider Tom Pelissero.  "#Browns star DE ...
CLEVELAND, OH・1 DAY AGO
Sports Illustrated

The Hall of Fame quarterback was not happy with the officials during the last of Sunday’s three flag football games.
22 HOURS AGO
ESPN

Packers quarterback Aaron Rodgers and Ben Silverman of Canada held on for a 1-shot victory Sunday in the pro-am portion of the AT&T Pebble Beach Pro-Am.
GREEN BAY, WI・1 DAY AGO
ESPN

The Seahawks' star receiver signed an extension in the offseason and is putting that money toward growing his real estate portfolio. One is an equestrian farm in Mississippi and the other is in a star-studded Hollywood Hills neighborhood.
SEATTLE, WA・3 HOURS AGO
ESPN

A few months ago, after a serious knee injury, Zaire Wade thought his career was over. But now, having signed for BAL side Cape Town Tigers, the son of NBA legend Dwyane Wade is ready for his time in the spotlight.
14 HOURS AGO
OnlyHomers

There have been a number of sad reports coming out of the world of professional wrestling in recent weeks, with former stars passing away, both during their career and following it.
1 DAY AGO
ESPN

Guard Furkan Korkmaz has requested a trade from the 76ers, sources confirmed to ESPN.
PHILADELPHIA, PA・1 HOUR AGO
ESPN

The fantasy basketball waiver wire always has players who can help fill holes on your roster. Here are the ones to add before it's too late.
KENTUCKY STATE・1 HOUR AGO
ESPN

South Carolina is still No. 1 and Iowa is finally back in the top five. But two big games this week -- Iowa-Indiana and LSU-South Carolina -- could reshuffle the top teams.
ILLINOIS STATE・8 HOURS AGO
ESPN

Wide receiver A.J. Green announced his retirement Monday. The 34-year-old played 11 seasons in the NFL, spending the first nine in Cincinnati and his final two in Arizona.
CINCINNATI, OH・3 HOURS AGO
ESPN

LeBron James disappointed by losing out on Kyrie Irving, but 'focus is shifted'

LeBron James said that while he was disappointed by the Lakers losing out on trading for Kyrie Irving, his focus has shifted to "where it should be and that's this club now."
LOS ANGELES, CA・20 MINUTES AGO
ESPN

Madden NFL 23's official simulation of Super Bowl LVII is predicting the Philadelphia Eagles to pull away in second half and handle the Chiefs 31-17.
KANSAS CITY, MO・6 HOURS AGO
ESPN

QB Geno Smith said Friday that contract talks with the Seahawks are underway and the prospects of the sides reaching a deal are "looking very good."
SEATTLE, WA・2 DAYS AGO
ESPN

NFL QB bargains: Ranking best to worst, exploring who gets paid next

It's no surprise two of the league's best values -- Patrick Mahomes and Jalen Hurts -- are playing for the title. Which QBs come next?
11 HOURS AGO
ESPN

'Not there yet': Tortorella illustrates Flyers' rebuild to fans

John Tortorella, in his first season as Philadelphia's coach, sent a letter to Flyers season ticket holders Monday, saying he's pleased by the team's effort, but it has work to do to fulfill his long-term vision.
PHILADELPHIA, PA・2 HOURS AGO
ESPN

Go inside the Caesars Sportsbook "prop party," where most of the list of Super Bowl LVII props was produced.
LAS VEGAS, NV・9 HOURS AGO
ESPN

The Bulls enter the NBA trade deadline at a crossroads

Chicago's Big Three isn't producing results, leading to speculation around the league that the Bulls might have to make a big move before Thursday.
CHICAGO, IL・10 HOURS AGO
ESPN

Purdue remained atop the Associated Press men's college basketball poll despite suffering a loss, while Marquette pushed into the top 10 and NC State made its first poll appearance in four years.
WEST LAFAYETTE, IN・4 HOURS AGO