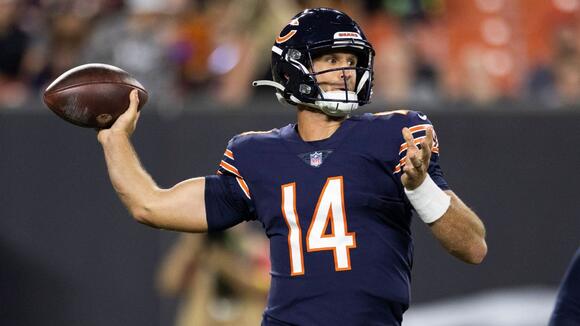 There's twists and turns. And then there's the Chicago Bears ' backup quarterback situation.

After Justin Fields separated his left, non-throwing shoulder in Atlanta against the Falcons last Sunday and was declared inactive for Chicago's game against the New York Jets , veteran QB Trevor Siemian is making his first start since Week 12 of the 2021 season, when he was with the New Orleans Saints .

After Siemian injured an oblique muscle during pregame warm-ups at MetLife Stadium, the team announced before the game that he would serve as the backup to quarterback Nathan Peterman , who the Bears promoted from the practice squad to the active roster on Saturday.

Despite that announcement, Siemian still started Sunday's game, with Peterman serving as his backup.

With a diminished depth chart at quarterback, the Bears also have running back David Montgomery available as an emergency option.

"He's kind of that extra green dot that we have in our back pocket," offensive coordinator Luke Getsy said last week.

It’s the sound of hearts breaking across Philadelphia and the state of Pennsylvania… and let’s be honest, everywhere else in the country, too. Eagles quarterback Jalen Hurts made a very rare public appearance with his girlfriend Bryonna “Bry” Burrows after the NFC Championship game this past Sunday, which is a surprise to many fans, as he is extremely private about his life outside of football.
PHILADELPHIA, PA・1 DAY AGO
ESPN

The GOAT is hanging them up ... again. After 23 seasons, seven titles and countless records, Brady got congratulations from around the sports world.
TAMPA, FL・10 HOURS AGO
ESPN

Kris Richard, whom the New Orleans Saints promoted from defensive backs coach to co-defensive coordinator last season, will not return to the team, a source confirmed to ESPN.
ATLANTA, LA・34 MINUTES AGO
ESPN

Tom Brady retires as GOAT in fantasy and betting, too

Tom Brady made a winner out of the New England Patriots, the Tampa Bay Buccaneers and too many fantasy football managers and sports bettors to count.
8 HOURS AGO
ESPN

Allie Quigley to sit out 2023 WNBA season but not retiring

Allie Quigley, a three-time All-Star who won a championship with the Sky in 2021, will sit out of the upcoming WNBA season but is not officially retiring, ESPN's Holly Rowe reported Wednesday.
CHICAGO, IL・1 HOUR AGO
ESPN

'People don't realize how hurt he was': Patrick Mahomes battles through injury to put Chiefs in SB

Though hobbled by a high ankle sprain, Patrick Mahomes came through for the Chiefs when they needed him, with perhaps the signature moment of Sunday's AFC Championship Game coming on the QB's final snap.
KANSAS CITY, MO・2 DAYS AGO
ESPN

Everything you need to watch this year's Pro Bowl festivities on ESPN and ABC, including times, rosters, skills competitions and rules.
LAS VEGAS, NV・3 HOURS AGO
ESPN

Dolphins quarterback Tua Tagovailoa has cleared the concussion protocol more than one month after entering it.
MIAMI, FL・6 HOURS AGO
ESPN

Williams was the first Black quarterback to win the Super Bowl, changing a narrative that Black QBs couldn't lead a team to a title while becoming a folk hero in the process.
ALABAMA STATE・12 HOURS AGO
ESPN

Nyckoles Harbor, the No. 39 player in the ESPN 300 football recruiting rankings, chose South Carolina and plans on suiting up as a wide receiver/tight end hybrid.
SOUTH CAROLINA STATE・6 HOURS AGO
ESPN

Doug Kezirian gives his insight into the betting market for Super Bowl LVII MVP, including how to approach the odds of Jalen Hurts and Patrick Mahomes winning the award.
KANSAS CITY, MO・2 DAYS AGO
ESPN

Rutgers announced Wednesday that it has hired Pat Flaherty, who was OL coach for the Miami Dolphins in 2019 and a member of two Super Bowl-winning New York Giants' staffs, as its new offensive line coach.
NEW BRUNSWICK, NJ・4 HOURS AGO
ESPN

Kyle Shanahan says he doesn't see "any scenario" where Jimmy Garoppolo will return to the 49ers in the 2023 season.
SAN FRANCISCO, CA・2 HOURS AGO
ESPN

Panthers owner David Tepper insisted on Tuesday he's doing what he can to break up the "old boys' network'' in the NFL.
CHARLOTTE, NC・1 DAY AGO
ESPN

Ohio State offensive coordinator Brian Hartline will have an opportunity to call plays this spring, but coach Ryan Day told reporters on Wednesday he won't decide if he's going to relinquish the play-calling duties this fall for another "few months."
COLUMBUS, OH・6 HOURS AGO
ESPN

Pro Football Hall of Fame executive Bobby Beathard has died at the age of 86.
FRANKLIN, TN・1 HOUR AGO
ESPN

Our experts give their instant reaction to the opening spread and total for Super Bowl LVII between the Philadelphia Eagles (14-3) and the Kansas City Chiefs (14-3).
KANSAS CITY, MO・2 DAYS AGO