Justin Fields Sitting This One Out 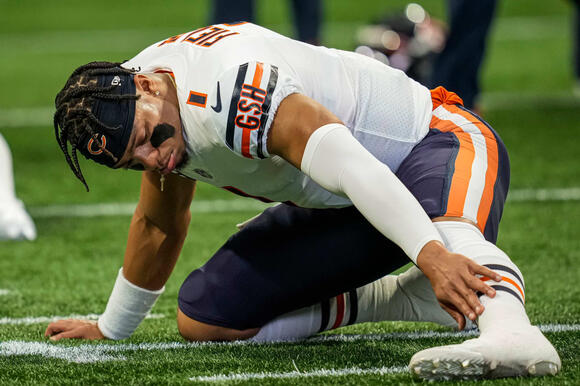 The Bears officially made Justin Fields inactive for the game, and former Northwestern QB Trevor Siemian will start.

The Bears let Justin Fields stretch and do some running and throwing at New Jersey Sunday and then waved him off for Sunday's game.

Fields is inactive and Trevor Siemian will get his first Bears start at quarterback in place of Fields, whose left shoulder injury is still too painful to allow him to play. Nathan Peterman was promoted to the 53-man roster on Saturday as backup QB and according to offensive coordinator the emergency QB is running back David Montgomery.

The Bears medical staff hadn't cleared Fields to play by the time the team got to New Jersey on Saturday.

Fields suffered the injury on the first play of the final drive for the Bears against Atlanta with 1:47 to play as he ran to the sideline and was tackled by Dee Alford.

His left shoulder hit the ground on the play. Fields was on for two more plays—a broken play that was supposed to be a draw by David Montgomery and Fields wound up running it and sliding before being hit on the right shoulder and a game-ending interception.

Fields went through a full week of limited practices and did try to take some team reps in practice during the week.

Siemian last played in a regular-season NFL Game last season for the Saints. He started four games and played in six during an injury plagued season for Saints QBs.

The early mock drafts held Will Anderson Jr. as a pick for the Bears at No. 1 but now there's a new No. 1 and choice for them.
CHICAGO, IL・21 HOURS AGO
BearDigest