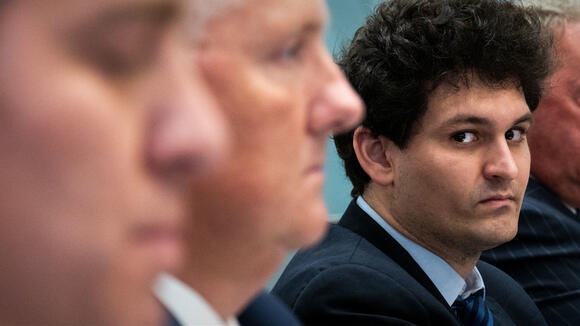 Since the fall of his crypto empire on Nov. 11, almost everything has been said about Sam Bankman-Fried.

His crypto bros called him "criminal." They accused him of lying to the clients and investors of his companies FTX and Alameda Research, a hedge fund that also operates as a trading platform.

"They lied. FTX lied. I think Sam lied to his employees, his users, his shareholders, regulators all around the world and all the users," Changpeng Zhao, founder and CEO of Binance, said during a Twitter event on Nov. 14. "So yes, he should take most of the blame."

Regulators in the United States and the Bahamas, where Bankman-Fried lives and where FTX was headquartered, have launched investigations. He was questioned by the Bahamian police on Nov. 12, but remains a free man. Congress plans a hearing to question him in December, but no date has yet been set.

The Bankman-Fried regime has been heavily criticized by the new FTX CEO in charge of the restructuring John Ray, who said that the former trader and his two associates have failed on every level.

"Never in my career have I seen such a complete failure of corporate controls and such a complete absence of trustworthy financial information as occurred here," wrote John Ray, in a 30-page document filed with the United States Bankruptcy Court in the District of Delaware.

"From compromised systems integrity and faulty regulatory oversight abroad, to the concentration of control in the hands of a very small group of inexperienced, unsophisticated and potentially compromised individuals, this situation is unprecedented."

The insolvency of FTX was due to a liquidity shortfall when clients attempted to withdraw funds from the platform. The shortfall appears to have been the result of FTX’s founder reportedly transferring $10 billion of customer funds from FTX to Alameda Research.

Bankman-Fried remains free for the time being. No charges have been brought against him, despite the fact that FTX's top 50 creditors are claiming $3 billion from the exchange and millions of retail investors may never recover their investments.

But for billionaire Mark Cuban, Bankman-Fried should end up in prison. This is what he has just stated to TMZ. He claimed that jail is imminent for the former king of cryptocurrencies.

"I don't know all the details, but if I were him, I'd be afraid of going to jail for a long time," the Dallas Maverick owner said. "I talked to the guy and thought he was smart."

"I had no idea he was going to take other people's money and put it to his personal use."

Bankman-Fried received a personal loan of $1 billion from Alameda, according to Ray. The firm also gave a $543 million personal loan to Nishad Singh, the FTX Director of Engineering, and $55 million to Ryan Salame, the co-CEO of FTX Digital Markets, one of FTX's affiliates.

"I understand that there does not appear to be documentation for certain of these transactions as loans, and that certain real estate was recorded in the personal name of these employees and advisors on the records of the Bahamas," the liquidator said.

He further wrote that, to be reimbursed for business expenses, employees only had to submit the request by chat and a supervisor would immediately approve with a personalized emoji.

As a crypto exchange, FTX executed orders for their clients, taking their cash and buying cryptocurrencies on their behalf. FTX acted as a custodian, holding the clients’ crypto currencies.

FTX then used its clients’ crypto assets, through its sister company’s Alameda Research trading arm, to generate cash through borrowing or market making. The cash FTX borrowed was used to bail out other crypto institutions in the summer of 2022.

At the same time, FTX was using the cryptocurrency it was issuing, FTT, as collateral on its balance sheet. This represented a significant exposure, due to the concentration risk and the volatility of FTT.

These Are the Stocks Nancy Pelosi Lost Big Money On

The Pelosis, like most Americans, had a rough fourth quarter of trading.
2 DAYS AGO
TheStreet

Here Are Some Higher-Yielding Alternatives to Savings Accounts

Bank savings accounts typically yield just 0.33% now, so it may not make sense to put any of your money there.
1 DAY AGO
TheStreet

Billionaire Barry Sternlicht Thinks He Knows When Recession Will Hit

2023 is shaping up to be a rough year for Americans and Barry Sternlicht has a timeline for when a recession might reach our shores.
2 DAYS AGO
TheStreet

Through the fourth quarter, the EV leader maintained its Sept. 30 stake in bitcoins -- but their value melted.
2 DAYS AGO
TheStreet

'Big Short' Burry Suggests the Stock-Market Jump Is a Mirage

Legendary investor Michael Burry seems to think that this year's market rebound will not last.
3 DAYS AGO
TheStreet

Cryptocurrency prices are climbing, but traditional financial services companies are cooling on crypto.
1 DAY AGO
TheStreet

How Economic Data Is Impacting the Stock Market

Action Alerts PLUS co-portfolio manager Chris Versace and Real Money contributor Stephen 'Sarge' Guilfoyle take a look at the markets and break down what they're watching on January 30 at 12 pm Eastern on Twitter Spaces.
18 HOURS AGO
TheStreet

What Is a Crypto Winter? Definition, Length & Investor Impact

Although cryptocurrency is a younger asset class, its overall performance seems to be somewhat cyclical—just like its more established peers. In other words, it experiences booms and busts in a similar fashion to more traditional securities like stocks and bonds. Despite being younger than most ...
1 DAY AGO
TheStreet

Can Boeing Stock Take Flight After Earnings Report? Let’s Look at the Chart.

Boeing fell more than 4% at one point after reporting earnings, but has found its footing. Here are the levels to know right now.
2 DAYS AGO
TheStreet

Tesla bulls believe that the electric vehicle's stock will keep rising despite price cuts to its models and an oversupply.
4 HOURS AGO
TheStreet

Stubbornly high inflation rates dragged on the U.S. economy in 2022, but recent data reveal signs of improvement.
2 DAYS AGO
TheStreet

Morningstar created a list of the 10 most undervalued recession-resistant stocks.
2 DAYS AGO
TheStreet

What Is the Internal Revenue Service (IRS)? Definition & History

Fed Inflation Gauge Eases To 4.4% In December As Spending Slumps

Personal spending fell most than expected in December, according to data from the Fed's preferred inflation gauge, helping price pressure ease over the final month of the year.
WASHINGTON STATE・1 DAY AGO