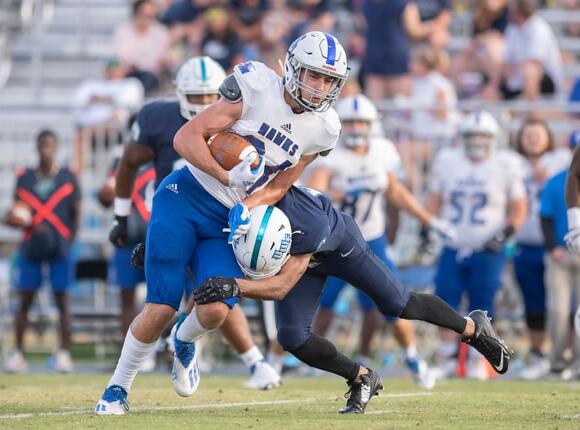 The Wisconsin Badgers offered transfer tight end Kyle Morlock and a pair of 2025 prospects on Saturday.

After falling to the Minnesota Gophers on Saturday, Jim Leonhard and the Wisconsin staff wasted little time making moves to potentially help bolster their roster in the future.

The coaching staff extended a pair of 2025 scholarships to prospects on campus, and also made a big move by offering a transfer tight end as well.

Here's a quick breakdown of all three players that earned a scholarship from the Wisconsin Badgers on Saturday.

After another year full of injuries at the tight end position, the Badgers made a scholarship offer to DII tight end Kyle Morlock of Shorter University.

A two-time DII All-American, Morlock is a prototypical tight end prospect with tremendous size and speed. At 6-foot-7 he is a strong blocker, but on film, he demonstrates an ability to run away from defenders as well.

As a result, schools from across the country have taken notice of the talented transfer from the lower ranks.

With an offer now in hand from Wisconsin, it will be interesting to see if the Badgers can get him on campus in the coming month for a visit. His offer list will likely continue to grow in the coming weeks, and with two years of eligibility remaining, he could be an impact player at the next level wherever he lands.

With the Badgers struggling with injuries at tight end the past few seasons, and Wisconsin without a 2022 signee at the position, expect the staff to continue to remain active in the portal at tight end.

You can watch some career highlights of Morlock in action below.

A two-time All-State selection at the 3A level of Iowa high school football, Mankse is a mobile quarterback that also excels on the defensive side of the ball because of his athleticism.

At 6-foot-3 and over 200 pounds, Manske already possesses good size to play quarterback at the college level and is generating interest from both in-state schools Iowa and Iowa State.

Playing in nine games this past season, threw for 1,688 yards and ran for another 407 on the ground with 20 total touchdowns.

Recently wrapping up his sophomore season, Manske made the trip to Madison this weekend for the Minnesota game, and he is a name to watch going forward as one of the top young quarterbacks in the Midwest.

Manske is the third quarterback to earn an offer from Wisconsin in the 2025 class, joining Stone Saunders and Ryan Montgomery, both of whom also visited the Badgers this fall.

You can see Manske's sophomore highlights below.

The Badgers offered a second visitor on Saturday, coming through with a scholarship opportunity for versatile sophomore Brady O'Hara.

At 6-foot-6, O'Hara excels at both tight end and defensive end at North Catholic High School in Pennsylvania. A first-team All-Conference selection as a defensive end this past season, O'Hara also holds an offer from in-state Pittsburgh.

With two Power-5 offers in hand, O'Hara could project to play either side of the ball at the next level depending on how he develops over the next two years.

On film, O'Hara moves well for such a young player that is already 233 pounds, and he makes impact plays on offense and defense.

With a long way to still go in his recruitment, O'Hara is a name to know for the future, especially after making the trip to Madison this past weekend.

You can check out his sophomore highlights here .