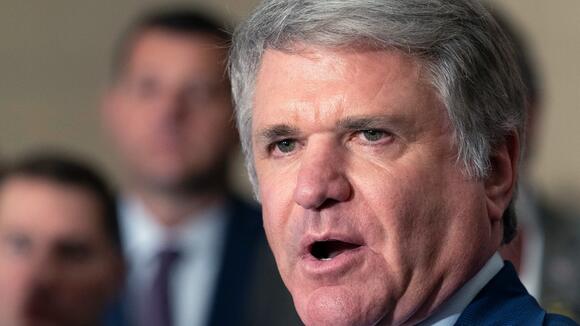 Rep. Michael McCaul (R-Texas) on Sunday said Republicans should “build a case” when asked if he supported potential efforts by House Republicans to impeach Department of Homeland Security (DHS) Secretary Alejandro Mayorkas over his handling of the U.S.-Mexico border.

McCaul told ABC’s “This Week” co-anchor Martha Raddatz that Mayorkas has been “derelict in his responsibilities” but “you’ve got to build a case” before impeachment.

“You need the facts, evidence before you indict,” the GOP lawmaker said.

House Minority Leader Kevin McCarthy (R-Calif.) last week called for Mayorkas to resign , saying Republicans will investigate and potentially impeach him when they take control of the House in the next Congress.

The GOP has repeatedly hammered Mayorkas and how he has run DHS, pointing to statements he’s made that the border is under control despite record border crossing numbers.

Republicans have also raised concerns about the end of the “Remain in Mexico” asylum policy enacted under the Trump administration, which allowed border agents to force migrants to wait in Mexico while their asylum claims are heard.

McCaul on Sunday said he believes DHS under the Biden administration is “complicit with the biggest human trafficking of our lifetime.”

“I think the American people deserve some accountability,” he said while claiming, “I have a wide-open border in my home state.”

Impeachment means nothing as evidenced by the twice impeached former guy. Impeach them all, then get something real done for the country like roll out a plan to address inflation.

we all hope border secure I'm more worried about mentally unstable man who declassified materials in head ????but top secret nuclear documents do not belong in his possession

The toddlers are out for drama. Remember just two weeks ago they had maga in a spin yelling about gas inflation border. Now the big babies are going to impeach the entire government. This will be fun watching maga explode 😀 🤣 🍻🍸🍿🍿🍿

In State of the Union address, Biden will highlight his dishonest take on the economy

It is unconscionable that Biden is still creating speedbumps to increased employment by, for example, not requiring people to pay their student loans.
2 DAYS AGO
The Hill

Congress is set to expose what may be the largest censorship system in U.S. history

The “Twitter files” revealed an FBI operation to monitor and censor social media content.
2 DAYS AGO
The Hill

Rep. Brian Fitzpatrick (R-Pa.) said on Sunday that he is working across the aisle on a bipartisan solution on the debt ceiling as lawmakers brace for bitter negations in the coming months over the nation’s finances. Fitzpatrick, who heads the Problem Solvers Caucus with Rep. Josh Gottheimer (D-N.J.), said the two men are working on…
1 DAY AGO
The Hill

Trump splits with McCarthy on Babbitt’s death: ‘I totally disagree’

Former President Trump said Thursday that he “totally” disagrees with Speaker Kevin McCarthy (R-Calif.) on the death of Ashli Babbitt, a Jan. 6 rioter who was shot and killed by Capitol Police. After Rep. Marjorie Taylor Greene claimed on Tuesday that Babbitt had been murdered during the pro-Trump insurrection, McCarthy broke with the Georgia congresswoman,…
GEORGIA STATE・3 DAYS AGO
Business Insider

The desk chairs that previous vice presidents used were all calibrated for taller men, according to the New York Times.
TEXAS STATE・3 HOURS AGO
The Hill

Former Trump economic adviser Gary Cohn said on Sunday that the United States is in “pretty good shape” and he does not expect a recession during the first two quarters of 2023. “I think that people … have been really worried about a recession in the first and second quarter of this year,” Cohn told…
1 DAY AGO
The Hill

Eight Republicans who could challenge Trump in 2024

The possibility of a crowded GOP presidential primary in 2024 has grown likelier in recent days following reports that former U.S. Ambassador to the United Nations Nikki Haley is gearing up to officially announce a White House bid later this month. Former President Trump is the only high-profile Republican who has formally announced a presidential…
WISCONSIN STATE・2 DAYS AGO
The Hill

Former President Trump and former New Jersey Gov. Chris Christie (R) sparred online Sunday after Christie predicted that Trump couldn’t beat President Biden if they run against each other in the 2024 presidential election.  Christie, who endorsed Trump in 2016 after dropping his own campaign for the presidency but has since become a vocal Trump…
NEW JERSEY STATE・1 DAY AGO
The Hill

A second Chinese “surveillance balloon” was spotted flying over Latin America after another one traveling across the continental U.S. was detected earlier in the day, officials confirmed Friday evening. “We are seeing reports of a balloon transiting Latin America.  We now assess it is another Chinese surveillance balloon,” Brig. Gen Pat Ryder, the Pentagon press…
MONTANA STATE・2 DAYS AGO
The Hill

Rep. Mike Turner (R-Ohio), the chair of the House Intelligence Committee, said on Sunday that he expects a briefing on the classified documents found in the possession of President Biden, former President Trump and former Vice President Mike Pence this week. Turner during an appearance on NBC’s “Meet the Press” also accused the Biden administration…
1 DAY AGO
The Hill

Sununu: Biden going to ‘try to take credit’ for jobs, economy during State of the Union

New Hampshire Gov. Chris Sununu, a moderate Republican, said that President Biden would try to take credit for the economy ahead of his State of the Union speech next week but argued such achievements of the administration were not impressive. Sununu, who is considering a White House bid of his own, argued on ABC’s “This…
NEW HAMPSHIRE STATE・1 DAY AGO
The Hill

More than 100 House Republicans signed an amicus brief arguing against the Biden administration’s student loan forgiveness plan as the Supreme Court is set to hear arguments on the case later this month.  Reps. Virginia Foxx (N.C.), the chairwoman of the House Committee on Education and the Workforce, and Jeff Duncan (S.C.) led 126 Republicans…
TEXAS STATE・2 DAYS AGO
The Hill

Rep. Marjorie Taylor Greene (R-Ga.) on Monday called for a probe into why former President Trump was apparently not informed of previous Chinese surveillance balloons that Biden officials are saying crossed over the U.S. at least three times during the previous administration. “If it’s true the Pentagon purposely did NOT tell President Trump of Chinese…
4 HOURS AGO
Toni Koraza

Photo byPhoto 122725292 © Joe Tabb | Dreamstime.com. DeSantis is keeping his 2024 plans quiet, while Trump loses no time to coming after DeSantis. Former President Donald Trump intensified the tension between him and Ron DeSantis when he shared a video of the Florida governor on his Truth Social page.
FLORIDA STATE・10 HOURS AGO
The Hill

Vice President Harris’s allies rallied around her on Monday in response to a New York Times story in which Democratic officials, many anonymously, questioned her work in office thus far and whether she could be the standard-bearer for the party moving forward.  The Times reported that “dozens of Democrats in the White House, on Capitol…
1 HOUR AGO
The Hill

The Manhattan district attorney possessed sufficient evidence to convict former President Trump last year and was wrong to not seek charges, an ex-prosecutor in the case contends in his forthcoming book. Mark Pomerantz argued his team built a “solid case” for securing Trump’s conviction on financial crimes, and he offered a searing criticism of how…
MANHATTAN, NY・33 MINUTES AGO
The Hill

The powerful political network led by conservative billionaire Charles Koch waded into the GOP’s 2024 presidential primary on Sunday, saying the party needs to “turn the page on the past,” in an apparent turn against former President Trump.  The Koch network said it’s planning to put its deep-pocketed support behind a Republican candidate in the…
1 DAY AGO
coinchapter.com

The US Government ordered the Pentagon to destroy the alleged Chinese spy balloon. The US Air Force shot down the balloon with a single missile as it drifted over the Atlantic Ocean. China hit back at the decision, threatening a strong retaliation. YEREVAN (CoinChapter.com) — Over the last few days,...
MONTANA STATE・1 DAY AGO
The Hill

This a much-needed opportunity to for the GOPredefine its direction.
ARKANSAS STATE・5 HOURS AGO
The Hill

Name-calling and false claims won't work against a possible opponent whose stock is rising. This ain't Jeb Bush. And it ain’t 2016 anymore.
FLORIDA STATE・1 DAY AGO