Russian artillery rains down across Ukraine as wintry warfare looms 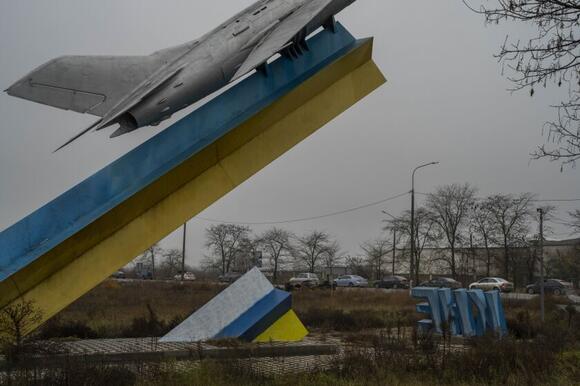 With persistent snowfall blanketing the capital, Kyiv, analysts predicted that wintry weather — bringing with it frozen terrain and grueling fighting conditions — could have an increasing impact on the trajectory of the war, which began when Russian forces invaded Ukraine more than nine months ago.

Both sides were already bogged down by heavy rain and muddy battlefield conditions, experts said.

After a blistering barrage of Russian artillery strikes on at least two occasions over the last two weeks, infrastructure teams in Ukraine were fanning out in around-the-clock deployments to restore key basic services as many Ukrainians dealt with having only a few hours of electricity per day — if at all.

Ukrenergo, the state power grid operator, said Sunday that electricity producers were now supplying about 80% of demand. That’s an improvement from Saturday’s 75%, the company says.

The deprivations have revived jousting between Ukraine’s president and Kyiv’s mayor. Mayor Vitali Klitschko on Sunday defended himself against allegations leveled by President Volodymyr Zelensky that too many Kyiv residents were still without power and that insufficient centers had been set up for them to stock up on food, water, battery power and other essentials.

Klitschko wrote on Telegram that hundreds of such centers are in operation, as well as hundreds of emergency generators, adding that “I do not want, especially in the current situation, to enter into political battles. It’s ridiculous.”

The president and the mayor have sporadically sparred since Zelensky took office in 2019. Zelensky has accused Klitschko and officials around him of corruption, while Klitschko contends the president’s office has put him under political pressure.

The Institute for the Study of War, a Washington-based think tank that has been closely monitoring developments in Ukraine, said reporting from both sides indicated that heavy rain and mud have had an effect on fighting, and freezing temperatures expected along the front lines in coming days could also play a role.

“It is unclear if either side is actively planning or preparing to resume major offensive or counteroffensive operations at that time, but the meteorological factors that have been hindering such operations will begin lifting,” it said in a note published Saturday.

The institute said Russian forces were digging in farther east of the city of Kherson, from which they were expelled by Ukrainian forces more than two weeks ago, and continued “routine artillery fire” across the Dnieper River.

The think tank also cited reports that Russian forces were moving multiple rocket-launch and ground-to-air missile systems into positions closer to the city as part of a possible plan to step up “the tempo of rocket and anti-air missile strikes against ground targets north of the Dnieper River in the coming days.”

The top U.N. official in Ukraine said civilians, many of whom lamented unlivable conditions and feared more strikes to come, continued to pour out of Kherson on Sunday.

“The level of destruction, the scope of the destruction, what’s required in the city and in the oblast — it’s massive,” said U.N. resident coordinator Denise Brown, referring to the region. U.N. teams were ferrying in supplies like food, water, shelter materials, medicines and blankets and mattresses, she said.

“Time is of the essence, of course, before it becomes an absolute catastrophe,” Brown told the Associated Press in Kherson.

Galina Lugova, head of the city’s military administration, said in an interview Sunday that evacuation trains had been lined up and bomb shelters set up in all city districts with stoves, beds, first-aid kits and fire extinguishers.

“Everything you need,” she said.

“We are preparing for a winter in difficult conditions, but we will do everything to make people safe,” Lugova said. Her biggest worry, she said, was “shelling that intensifies every day . Shelling, shelling and shelling again.”

On the roads out of the city, some residents felt they had no choice but to leave.

“The day before yesterday, artillery hit our house. Four flats burned down. Windows shattered,” said Vitaliy Nadochiy, driving out with a terrier on his lap and a Ukrainian flag dangling from a sun visor. “We can’t be there. There is no electricity, no water, heating. So we are leaving to go to my brother.”

why is not nato supplied artillery not raining down on Russia, seems like a one sided War to me!!! well not a war it's one sided . throw a couple into Moscow see how quick they take out Putin.

and he tried to lie about the one who was doing it, and that is why our economy is like it is, the Ukrainians we're helping us, not the only ones who were supplying, but now Putin destroyed their crops and their power plants

"Hard power is a reality," US Army Gen. Christopher Cavoli said in January. "If the other guy shows up with a tank, you better have a tank."
17 HOURS AGO
Los Angeles Times

Russian forces are keeping Ukrainian troops tied down with fighting in the east as Moscow appears to build additional firepower for a new offensive.
4 HOURS AGO
Los Angeles Times

Magnitude 7.8 earthquake kills more than 2,300 people in Turkey and Syria

The magnitude 7.8 earthquake near Gaziantep, a major city in southern Turkey, was followed by a second one measuring magnitude 7.5 about 60 miles away.
14 HOURS AGO
Fox News

Several China experts predicted what Beijing's next move would be after their spy balloon that flew across America over several days was blown up by the U.S. military on Saturday.
TEXAS STATE・1 DAY AGO
CNN

President Joe Biden said the mission to shoot down a suspected Chinese spy balloon off the East Coast was successful, and that he had ordered the Pentagon to knock the aircraft out of the sky as soon as it was safe to do so.
1 DAY AGO
SheKnows

Donald Trump’s campaign team in Wisconsin knew they lost the state in the 2020 presidential election, but that didn’t stop them from trying to spin a fraud narrative. There’s new audio that is confirming that Republican officials behind the scenes were trying to cook up a story that the election was stolen.  This is the latest chaotic issue to come down the pike as Donald Trump tries to run for president for the third time. According to the Associated Press, who posted the leaked audio, the voice is of Andrew Iverson, who led the former president’s campaign in Wisconsin, and shockingly...
WISCONSIN STATE・2 DAYS AGO
Toni Koraza

Photo byPhoto 122725292 © Joe Tabb | Dreamstime.com. DeSantis is keeping his 2024 plans quiet, while Trump loses no time to coming after DeSantis. Former President Donald Trump intensified the tension between him and Ron DeSantis when he shared a video of the Florida governor on his Truth Social page.
FLORIDA STATE・4 HOURS AGO
Deseret News

Back to having no basics: Iranians tighten belts as the economy tanks and protests continue

Iranians are finding it harder than ever to afford even basic goods as political unrest roils the country and the government cracks down harshly.
2 DAYS AGO
Reuters

The US Government ordered the Pentagon to destroy the alleged Chinese spy balloon. The US Air Force shot down the balloon with a single missile as it drifted over the Atlantic Ocean. China hit back at the decision, threatening a strong retaliation. YEREVAN (CoinChapter.com) — Over the last few days,...
MONTANA STATE・22 HOURS AGO
Los Angeles Times

The Biden administration has offered to brief congressional leaders on its investigation into the classified documents found at former President Trump's Florida residence.
INDIANA STATE・19 HOURS AGO