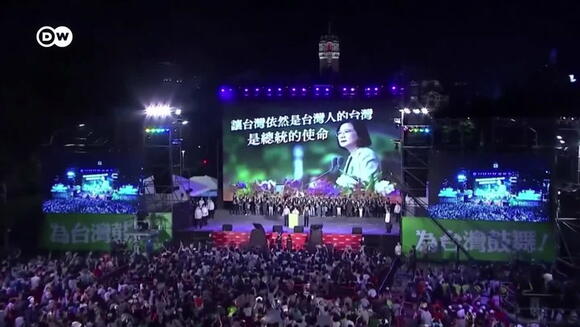 Ms Tsai’s party lost 13 of the total 21 seats up for grabs to the KMT, the oldest political party in Taiwan, despite a full-throated campaign, with analysts suggesting that her efforts to focus the election on China issues backfired among voters.

The Taiwanese president said she humbly accepts and must shoulder responsibility for the party’s disappointing election results as she addressed reporters at the DPP headquarters.

The DPP had campaigned on sending a strong message to the world about Taiwan’s ability to protect its democracy in a local election which would normally focus on more domestic issues like Covid-19 infections and local crime rates.

Taiwanese premier Su Tseng-chang also resigned but Ms Tsai said she has asked him to hold on to the post to ensure that the administration’s major policies are not hindered.

She also blamed the election defeat on the party’s failure to change the political situation at the local government level and not meeting the expectations of citizens.

Her party’s rival and Taiwan’s main opposition party – the KMT – turned to younger candidates, including the grandson of former Chinese president Chiang Kai-shek, Chiang Wan-an, to turn the tide of its electoral fortunes and secure a return to form in the local elections.

One of the favourites in the Taipei mayoral race, 43-year-old Mr Chiang successfully wooed voters to become the youngest-ever mayor of the wealthy cosmopolitan capital city.

The returning party’s chair Eric Chu said that the KMT understood that only by uniting could it secure a win.

While Ms Tsai’s DPP campaigned on the political anger against China’s stance towards Taiwan, the KMT focussed more on the self-ruled island’s democracy and freedom. 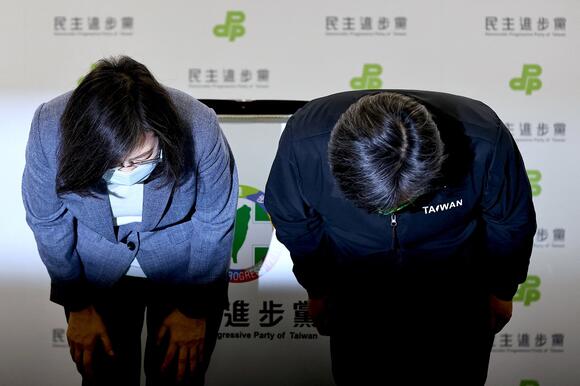 Its campaign also pointed to issues like the pandemic, especially after a surge in cases this year and whether the government favoured a local vaccine over imported ones.

"Taiwan’s people have given us an opportunity," he said. "Being selfless is the only chance that the KMT could win the 2024 election," the party’s chairman Eric Chu said at the party’s headquarters on Saturday after winning at the polls.

The heated political campaigning by the DPP saw a narrative of sending a strong message to China, signalling the self-governed island’s ability to rule. However, none of those elected have a direct say in policy on China.

China views Taiwan as a breakaway province and its own territory, but the island has been self-ruled since the civil war in the late 1940s and enjoys many democratic freedoms and civil liberties that the mainland does not.

Voter turnout for the local elections was also seen at a record low on Saturday at just 59 per cent in the country’s six most important cities. In contrast, the overall figure was recorded at around 75 per cent in 2020.

Several China experts predicted what Beijing's next move would be after their spy balloon that flew across America over several days was blown up by the U.S. military on Saturday.
TEXAS STATE・1 DAY AGO
The Hill

Sen. Tom Cotton (R-Ark.) on Sunday accused President Biden of delaying his decision to take down the suspected Chinese spy balloon to “salvage” Secretary of State Antony Blinken’s trip to China. “I do believe the administration wanted to salvage the Secretary of State’s trip on Friday night, and they got through Thursday afternoon,” he told…
MONTANA STATE・17 HOURS AGO
Deseret News

The US Government ordered the Pentagon to destroy the alleged Chinese spy balloon. The US Air Force shot down the balloon with a single missile as it drifted over the Atlantic Ocean. China hit back at the decision, threatening a strong retaliation. YEREVAN (CoinChapter.com) — Over the last few days,...
MONTANA STATE・22 HOURS AGO
The Independent

Liz Truss interview: 5 key things to watch out for

It’s only three months since Liz Truss left Downing Street in disgrace, booted out by the Conservative party after her borrowing-fuelled tax cuts caused economic turmoil during her six-week reign.Rishi Sunak’s predecessor has launched a comeback aimed at restoring her credibility, lashing out at the “economic establishment” and Tory tax refuseniks in a 4,000-word defence of her premiership.Ms Truss will continue her defence – causing consternation among Tories – with an interview shown on The Spectator’s YouTube channel at 5pm on Monday. The Independent takes a look at the potential pitfalls and opportunities for the ex-Tory leader as she...
2 HOURS AGO
The Independent

North Korea has scheduled a major political conference to discuss the “urgent task” of improving its agricultural sector, a possible sign of worsening food insecurity as the country's economic isolation deepens amid a defiant nuclear weapons push. North Korea’s official Korean Central News Agency said Monday that members of the ruling Workers’ Party’s Politburo met on Saturday and agreed to hold a larger plenary meeting of the party’s Central Committee in late February to review strategies on agriculture and set new goals. It said the Politburo members acknowledged a “a turning point is needed to dynamically promote the radical...
11 HOURS AGO
The Independent

US Navy divers are beginning to recover debris from a Chinese spy balloon that a US jet shot down off the coast of South Carolina, as tension builds between the world powers amid the Biden administration’s efforts to stabilise its relationship with Beijing.On Saturday, Pentagon officials revealed that several similar high-altitude surveillance ballons from China had travelled over the continental US during former president Donald Trump’s administration.The former president has repeatedly denied the claims, dismissing them as “fake disinformation” and claiming Beijing had “too much respect” for him to have carried out surveillance in US airspace.Mr Trump and Republican...
SOUTH CAROLINA STATE・1 HOUR AGO
The Independent

The Biden administration has offered to brief former Donald Trump officials about the Chinese spy balloons that they failed to catch during his administration.The Pentagon announced on Saturday that three suspected Chinese surveillance balloons travelled over the continental US during Mr Trump’s time in office. Among the three separate encounters, one balloon is believed to have travelled over parts of Texas and Florida.None of the balloons were shot down and the American people were not made aware of the situation.A fourth balloon also reportedly entered US airspace earlier on in the Biden administration.Mr Trump repeatedly denied the US intelligence...
TEXAS STATE・2 HOURS AGO
The Independent

A former Israeli prime minister who served briefly as a mediator at the start of Russia's war with Ukraine says he drew a promise from the Russian president not to kill his Ukrainian counterpart.Former Prime Minister Naftali Bennett became an unlikely intermediary in the war's first weeks, becoming one of the few Western leaders to meet President Vladimir Putin during the war in a snap trip to Moscow last March. While Bennett's mediation efforts appear to have done little to end the bloodshed that continues until today, his remarks, in an interview posted online late Saturday, shed light...
1 DAY AGO
The Independent

Senator Cory Booker is asking his colleagues to cool off the rhetoric aimed at China after the US shot down a spy balloon over the weekend and a four-star US general predicted that war with the rival superpower was inevitable.The New Jersey Democrat spoke Sunday on NBC’s Meet the Press with Chuck Todd. During the interview, he knocked what he said was a growing “drumbeat” or “rush” to conflict with the People’s Republic of China that was unhealthy and ran the risk of souring peaceful alternatives.His remarks came in response to a question from Mr Todd asking him to...
18 HOURS AGO