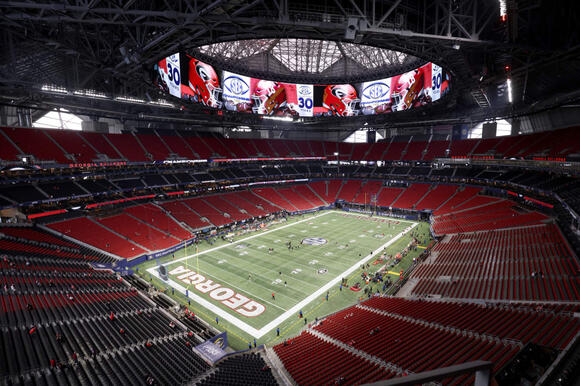 The 2022 college football regular season has officially come to an end and Championship Week is upon us. The matchups for every conference championship have been set and there will certainly be some good games to watch next weekend. Of course, there are major College Football Playoff implications and bowl game significance for some of the conference title games, but bragging rights and some serious hardware are on the line across the board.

Here is the full schedule and matchups for each Division I FBS college football conference championship game (all times Eastern):

The Arizona Cardinals have been looking to fill their vacant head coach role, and there are loud rumblings of a key reason why it is taking so long to fill. The name that everyone brings up when discussing the issues with the team filling the coaching spot is quarterback Kyler Murray.
23 HOURS AGO
OnlyHomers

Just days before the 2023 Super Bowl, one of the star players that is set to take the field for the game has been arrested on absolutely shocking charges. Offensive Lineman Josh Sills, who is in his rookie season for the Philadelphia Eagles, will be in court on February 16 in relation to claims that are so shocking and vile that we recommend you read for yourself here.
PHILADELPHIA, PA・2 DAYS AGO
Cavaliers Now

The Cavaliers had their 29-match winning streak snapped by the Wildcats on Friday
CHARLOTTESVILLE, VA・1 HOUR AGO
FanSided

The Denver Broncos got their man in newly minted head coach Sean Payton, but it looks like Payton won’t be getting his top choice of defensive coordinator in 2023. This week, the Denver Broncos traded for former New Orleans Saints head coach Sean Payton to begin a new era for the franchise. Some believe the Saints to be the outright winners of that trade, yet Denver still got a bargain for Payton and should benefit from cleaning house.
DENVER, CO・13 HOURS AGO
Cavaliers Now

The Hoos battle the Hokies in round two of the Commonwealth Clash on Saturday in Blacksburg
BLACKSBURG, VA・10 HOURS AGO
Cavaliers Now