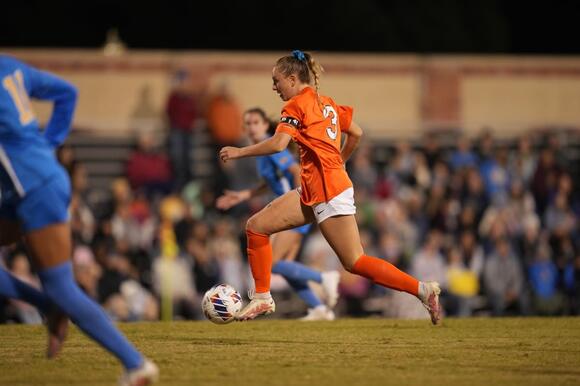 As one of the top programs in all of NCAA women's soccer, Virginia has long been overdue to win its first national championship. In so many seasons, the Cavaliers have been among the best teams in the nation only to see their postseason run fall short of the College Cup. This time, it was UCLA, the No. 1 seed and overall No. 1-ranked team in country, who denied the Hoos from reaching the College Cup and having a chance at bringing home their first national title.

For the second match in a row, the Cavaliers showed remarkable resiliency to erase a second-half deficit and send the match into overtime. But this time, Virginia could not completely stage the comeback as UCLA scored in overtime and beat the Cavaliers 2-1 on Saturday night in Los Angeles in the quarterfinals of the NCAA Women's Soccer Championship.

The Cavaliers have shown throughout the season that they play their best soccer with their backs against the wall. They showed it when they scored three goals in the second half to erase a 2-0 deficit at North Carolina and they showed it again last week when they came back from down 1-0 and 2-1 in the second half at Penn State. The Hoos had to do it again as they spent the middle 60 minutes of this quarterfinal match trailing the Bruins 1-0 after yielding an early goal.

UCLA struck first in the 15th minute off of a brilliant give-and-go play between Sunshine Fontes and Lexi Wright. Fontes made a run towards the box from the left wing and dropped the pass off to Wright, who sent a pass immediately back to Fontes as she streaked towards the goal. Fontes released her shot from just a few yards from the left post. UVA goalkeeper Cayla White was in good position and got her hands on the shot, but it was not enough to stop the ball's momentum from carrying it into the goal to give the Bruins the early lead.

UCLA nearly doubled its lead in the 24th minute as Lexi Wright slid into a cross and used her chest to send the ball into the back of the net, but the goal was disallowed as Wright was offsides.

Although the Bruins had the more threatening scoring chances, the Cavaliers largely won the battle for possession in the midfield and had the Bruins spending a lot of time in their defensive zone throughout the match. UVA had two shots on goal in the first half, including one from Lia Godfrey from the edge of the box, but UCLA Lauren Brzykcy saved each shot with relative ease to maintain the Bruins' 1-0 advantage at halftime.

Shots were even at 4-4 in the first half, but the Cavaliers became more aggressive in converting their possession advantage into scoring chances in the second half. Virginia outshot UCLA 7-3 in the second half and four of those shots went on frame.

For awhile, even those accurate shots weren't enough to beat Brzykcy, who was steady in between the posts with five saves in the match. Brzykcy saved a well-struck shot from Alexa Spaanstra from the left wing in the 66th minute. That was just the beginning of a barrage of UVA scoring chances that eventually produced the equalizer.

Virginia earned six corner kick opportunities in the second half and had an 8-1 advantage in that category for the match. Finally, in the 75th minute, the Cavaliers capitalized on one of those chances as Lia Godfrey served in a corner kick and Haley Hopkins got her head on the ball to send it into the back left corner of the net to pull the Cavaliers even with the Bruins at 1-1.

Of course, UCLA began to attack the UVA defense with a renewed aggression after that and produced two dangerous scoring chances right away. In the 81st minute, a UCLA cross wound up just a few feet in front of the cage, but Alexis Theoret managed to clear it away before UCLA could get a foot on the ball. One minute later, another cross made its way to the doorstep, but Cayla White made a diving effort to cover up the ball.

The Godfrey-Hopkins connection nearly struck again on a UVA corner kick in the 84th minute, but Brzykcy made a diving save to prevent Virginia from taking the lead.

Time expired in regulation, sending Virginia into overtime for the second match in a row. UVA continued to outplay UCLA for the most part in the midfield, winning a distinct advantage in possession time. But in soccer, all it takes is one play. In the 98th minute, UCLA sent a cross from the left wing into the box and it was headed out by UVA's Lacey McCormack, but the ball came right to the foot of Sophia Cook, who sent in a shot with the outside of her right foot that curled around the diving Cayla White and found its way inside the left post to put the Bruins back in front. It was a perfectly-placed shot and one certainly worthy of being a game-winner in an NCAA quarterfinal match.

Virginia had a few chances in the second overtime period, but the Cavaliers couldn't get any of their shots to go on frame. In the 107th minute, Talia Staude sent a long cross into the box and Hopkins elevated and got her head on it, but her shot went just over the crossbar. In the 109th, Alexa Spaanstra worked her magic on the left wing before sending in a cross to the doorstep, but Maya Carter just barely couldn't get to it in time. In the waning seconds of the second overtime, one final desperation cross from Virginia was collected by Brzykcy to seal UCLA's win.

The Bruins certainly earned the victory and their spot as one of the four teams heading to the College Cup next week in Cary, but the Cavaliers will undoubtedly be frustrated by the missed opportunities that could have drastically altered the outcome of this match. Virginia outshot UCLA 15-9, including a 6-4 edge in shots on goal. That has been a problematic trend for the Cavaliers all season. In UVA's four losses this year, the Hoos outshot their opponents in three of those matches and had a combined 55-36 advantage in shots across those four defeats.

“It was a tough one to lose, obviously," said UVA head coach Steve Swanson. "We’re really proud of the team, the effort and the tremendous resiliency they’ve shown all season. It was tough to be down at the half, but we got ourselves back in the game. We put ourselves in a good position to win, we just didn’t make the plays down the stretch. We could have easily come out of here with a win and that’s part of why it hurts so bad.”

Virginia concludes the 2022 season with a 16-4-3 record after reaching the NCAA quarterfinals for the 9th time in program history, but coming up just short of advancing to what would have been UVA's 5th College Cup appearance.

The Cavaliers swept the Tigers on Sunday to clinch a spot in the ITA National Team Indoor Championships
CHARLOTTESVILLE, VA・10 HOURS AGO
Cavaliers Now

The Cavaliers look to complete the season sweep with a win over the Orange at the Dome on Monday night
SYRACUSE, NY・5 HOURS AGO
Cavaliers Now

The Cavaliers added a talented and athletic safety to their 2023 recruiting class just before National Signing Day
CHARLOTTESVILLE, VA・16 HOURS AGO
Cavaliers Now

The Cavaliers will play in the championship match of the ITA Kickoff Weekend on Saturday
CHARLOTTESVILLE, VA・2 DAYS AGO
Cavaliers Now

Huff is averaging 4.4 blocks per game, double that of the second-leading shot blocker in the NBA G League
CHARLOTTESVILLE, VA・2 DAYS AGO