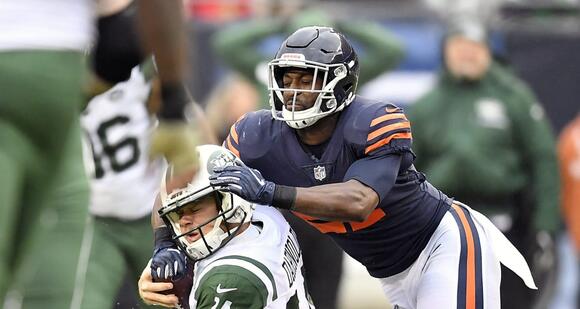 The Bears come into Sunday's game vs. the Jets uncertain about Justin Fields' health and whether he or Trevor Siemian starts.

The Series: The 13th game in a series that began in 1974. The Bears own a 9-3 series edge with a 4-1 record on the road. The Bears have won five straight in the series.

The Coaches: Bears coach Matt Eberflus is 3-8 in his first year. As an assistant, his teams played the Jets six times and were 2-4.

Jets coach Robert Saleh is 10-17 in his second season as Jets coach.

Last Week: The Bears trailed 27-24 and had the ball for a final drive in the last two minutes but QB Justin Fields injured his left shoulder on a run at the sidelines, then two plays later threw a game-deciding interception that deflected off the hand of a leaping David Montgomery.

The Jets lost 10-3 on an 84-yard punt return by New England's Marcus Jones with five seconds left in the game. The Jets offense managed only 136 total yards, 59 rushing and 77 passing. Afterward, Jets quarterback Zach Wilson said he felt no need to apologize to his defense after they held the Patriots to a field goal until the final seconds. Wilson was benched for this game in favor of QB Mike White.

This Season: The Bears have seven of their last eight and had chances to win or tie on their final possession five times but lost each, with another chance to tie aborted by a muffed punt. Fields comes into this game with uncertainty as he's questionable with his left shoulder injury. RB Khalil Herbert is unavailable to play, on IR, with a hip injury and is second in the NFL in yards per carry among running backs. Fields is 136 of 228 for 1,642 yards (59.6%) with 13 TD passes, 8 INTs and a passer rating of 86.2. David Montgomery has 132 rushes for 501 yards and three TDs, while tight end Cole Kme has 26 catches for 309 yards and five TDs, including all five in the past four weeks. Darnell Mooney leads the team with 40 catches for 493 yards and a TD. Safety Eddie Jackson has four interceptions to lead the team.  Fields leads the Bears in rushing and is 166 yards from a 1,000-yard season. He has 834 yards on 122 attempts with seven TDs.

Jets QB Mike White has started three games, all in 2021, and played extensively in one other one that season. He has been in the league since 2018. He has five TD passes, eight interceptions, has completed 88 of 132 for 953 yards and has a passer rating of 75.1. Rookie Breece Hall leads the Jets in rushing with 463 yards but is out for the season with a torn ACL. Michael Carter is the leading rusher now on the roster with 349 yards on 93 carries and three TDs. Former Jaguars running back James Robinson has 75 yards on 25 carries. Rookie receiver Garrett Wilson leads the Jets with 44 receptions for 533 yards with two TDs. TE Tyler Conklin has 35 receptions and a team-high three TDs. Slot receiver Braxton Berrios has 12 catches for 69 yards. 69 carries. Defensive tackle Quinnen Williams has eight sacks and seven tackles for loss to lead the Jets defense, while S Lamarcus Joyner has three interceptions to lead the Jets secondary.

Of Note: Bears QB Siemian was Jets starter for one game in 2019 and suffered a season-ending ankle injury in that game. Siemian has 29 starts, nine more than Fields. ... Jets WR Corey Davis is expected to return after missing three games with a knee injury. ... Fields' five straight games with at least one TD rushing and passing has tied him with Kyler Murray as the only QBs to do this in the Super Bowl era. ... The Jets will induct former CB Darrelle Revis into the team's Ring of Honor at halftime. Revis is a semifinalist for the Pro Football Hall of Fame in his first year of eligibility. ... The Jets' 32 sacks are one less than they had all last season. ... The Jets' 58 QB hits leads the NFL.

Next Week: The Bears host rival Green Bay at noon on Sunday, Dec. 4. The Jets are at Minnesota that day at noon.

Whitehair has been the most consistent Bears blocker throughout the season but now he's facing one of the rising young interior defensive performers in the league. Williams has a career-high eight sacks and 18 quarterback hits using both power and speed off the defensive interior. Pro Football Focus judges him as the fourth-best defensive tackle in the league and seventh-best interior pass rusher. Whitehair has a slight size advantage because Williams is 6-3, 303 but it's the explosiveness Williams shows and an ability to work off other Jets pass rushers that makes him a threat.

Reiff has performed at a higher level overall than Larry Borom did as starter but has allowed two sacks, although he has been efficient and committed just one penalty. Pro Football Focus actually has the two graded only two spots apart, Reiff 43rd best tackle and Borom 45th. Lawson is coming off an Achilles tear and leads the Jets in sacks with five and has 17 quarterback hits. The former Bengals defensive lineman was a smart choice for the defensive style the Jets play when he was signed before 2021. He had come into his own with 44 pressures the previous year.

Franklin-Myers has developed with the Jets after starting out with the Rams. He has 3 1/2 sacks, 15 pressures, 14 QB hits and 22 tackles, including three for loss this season. Franklin-Myers is a very interchangable player for the 49ers defense as he's big enough to line up inside on pass rush situations at 6-4, 288, but overpowers off the edge. While Jones has been a name tossed about as disappointing to Bears fans, PFF still ranks him the 26th best tackle in the league and grades him higher than players like Orlando Brown with the Chiefs, Taylor Decker with the Lions and Trent Brown of the Patriots. He is graded as the 18th best run blocker among tackles, only one point in their system below Green Bay's David Bakhtiari. Still, it's going to be a difficult chore for a rookie like Jones, and any Bears blocker, handling all the stunting the 49ers use.

It's rare when the Bears get much more than one catch from St. Brown and he continues to log extensive playing time because of his blocking and has been on the field for 66% of plays. Fields has a passer rating of 52.7 when he targets St. Brown. Even at 6-foot-5, St. Brown would find it difficult getting open against Ahmad "Sauce" Gardner, the fourth pick of this year's draft from Cincinnati. Gardner already has 14 breakups to go with two interceptions and 6-foot-3 cornerback uses his reach well. He has a passer rating against this year of just 55.5 with 52.7% completions allowed and only one TD, according to Sportradar.

The rookie from Ohio State hasn't disappointed with a team-high 44 catches for 533 yards, although he has made it to the end zone only twice. The Jets also have Corey Davis, who can line up at the X-position but has been suffering from a knee injury and just returned to practice this week. They move Wilson around the formation extensively and it wouldn't be surprising to see Johnson matched up all over the field on him. How much past an oblique injury Johnson is remains to be seen. The Falcons weren't challenging anyone with their passing last week but the Jets will, even though the main challenge will be from their running attack.

TICKETS TO SEE JUSTIN FIELDS AND THE BEARS THROUGH SI TICKETS

It’s never a good day when you’re learning about someone passing away especially if you’re attached to that person. And if you’re a Pittsburgh Steelers fan and have been a fan of the team for awhile this might have hit you hard. Former Steelers running back...
PITTSBURGH, PA・7 HOURS AGO
BearDigest

Stability has been the main factor for the two offensive lines in the Super Bowl, and it's something the Bears lacked.
CHICAGO, IL・2 DAYS AGO
BearDigest

A few under-the-radar types who stepped up at the Senior Bowl could fit the Bears defensive scheme, as can some bigger names.
CHICAGO, IL・54 MINUTES AGO
BearDigest

A quarterback who can run is going to be a trend for the future at the position Bears QB Justin Fields says.
CHICAGO, IL・6 HOURS AGO
BearDigest

Tom Brady's retirement decision is impactful on the Bears well beyond the fact Tampa Bay is on the 2023 schedule.
CHICAGO, IL・1 DAY AGO
BearDigest

If the Bears are looking to sign one of the top free agent running backs they might find it difficult due to low tag figures.
CHICAGO, IL・2 DAYS AGO