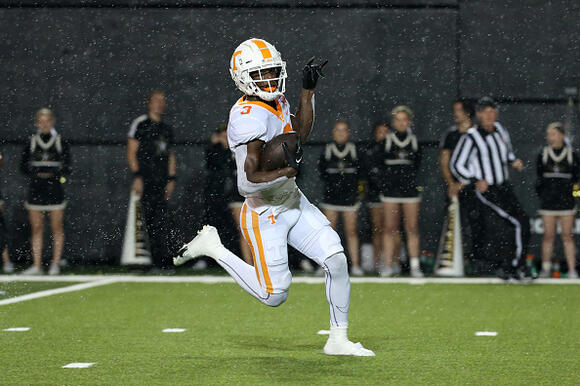 The Volunteers (10-2, 6-2 Southeastern Conference ) rebounded from losing two of their last three games to clinch their first 10-win regular season since 2003, and first overall since 2007. The losses had dropped the Vols from first in the inaugural College Football Playoff ranking to 10th.

Tennessee won its fourth straight, and this was never in doubt as the Vols led 21-0 at halftime and added 21 more in the third for their first shutout in this rivalry since a 48-0 win in 2003.

Wright scored on runs of 50 and 83 yards, while Small ran for a 48-yarder. Dylan Sampson added an 80-yarder in the fourth as Tennessee ran for six TDs. The Vols ran for more yards (362) than Vanderbilt managed in total offense (254).

Vanderbilt (5-7, 2-6) missed becoming bowl eligible in coach Clark Lea’s second season. The Commodores’ had their a two-game SEC winning streak snapped. That streak ended a 26-game league skid that started in 2019. They also more than doubled their two-win total of last year.

Joe Milton got his first start of the season and third since transferring from Michigan last year, replacing Hendon Hooker, who rooted on his roommate from the sideline despite tearing his left ACL last week. Milton hit his first three passes, including a 61-yarder to Jalin Hyatt to set up Small’s first TD on a 3-yard TD run.

Milton finished with 147 yards passing for his most at Tennessee with his only TD a 7-yarder to Walker Merrill in the third.

Dee Williams returned a punt 73 yards to put Tennessee up 21-0 midway through the second quarter, grabbing at his left hamstring after crossing the goal line before dancing in celebration.

Tennessee: The Vols came in as the nation’s top offense in both yards and points. With the rain, they showed they could score just as quickly on the ground as through the air with four TDs of 48 yards or longer. Five TD drives took 55 seconds or less.

📧 Have breaking come to you: Subscribe to News 2 email alerts →

Vanderbilt: The Commodores started Mike Wright, who led them to wins over Kentucky and Florida. But he struggled to throw against a Tennessee defense that gave up 453 yards passing last week. Freshman AJ Swann, who missed those games with an unspecified injury, took over in the third and threw for 79 yards, but was incomplete on a fourth-down throw into the end zone in the fourth quarter.

Milton’s strong arm was on display all night. He had chances to put the Volunteers up by more. But he overthrew several open receivers, including at least three that would’ve been touchdowns.

Tennessee waits and hopes for a berth in either the Sugar or Orange Bowl.

Nashville pastors are deciding if they want to watch the video of Tyre Nichols' Memphis traffic stop when it is released Friday.
NASHVILLE, TN・19 HOURS AGO
WKRN News 2

In case you missed "Wheel of Fortune" on News 2 Friday night, a Nashville man who competed on the show ended up winning more than $52,000 in cash and prizes!
NASHVILLE, TN・55 MINUTES AGO
WKRN News 2

Barry Cross from the Tennessee Wildlife Resource Agency said bobcats are not uncommon in Tennessee and mentioned what you should do if a predator like that shows up in your neighborhood.
FOREST HILLS, TN・2 DAYS AGO
WKRN News 2

It's been two months since a massive water leak flooded Bridgestone Arena and crews have been working around the clock to repair the damage.
NASHVILLE, TN・1 DAY AGO
WKRN News 2

Boutique hotels are all over Nashville, but what about a boutique dog hotel? That's the newest concept in Music City, called Yardstick.
NASHVILLE, TN・20 HOURS AGO
WKRN News 2

On Friday evening, you can watch as a Nashville man spins the wheel and tries to win big bucks right here on News 2!
NASHVILLE, TN・1 DAY AGO
WKRN News 2

The police chief of the Metropolitan Nashville Police Department is the latest to condemn the events surrounding the death of Tyre Nichols.
MEMPHIS, TN・1 DAY AGO
WKRN News 2

Three Lipscomb University students were taken to the hospital Thursday night after being exposed to a chemical.
NASHVILLE, TN・21 HOURS AGO
WKRN News 2

The historic arctic blast just before Christmas dealt a huge blow to some of the foliage around Middle Tennessee. News 2 took a trip to Cheekwood to see how its plants are doing a month after the winter storm, as well as get some gardening tips.
NASHVILLE, TN・2 DAYS AGO
WKRN News 2

Nashville pharmacists have noticed a trend with the drug, Ozempic, approved to treat type 2 diabetes, now in demand for one of its side effects.
NASHVILLE, TN・2 DAYS AGO
WKRN News 2

If you look at a Baird's Tapir, you might think it's a smaller version of a hippopotamus. However, its closest relatives are actually horses and rhinos.
NASHVILLE, TN・7 HOURS AGO
WKRN News 2

One dead, two injured after gas station shooting in Clarksville

A homicide investigation is underway following a Saturday morning shooting at a Clarksville gas station that left one person dead and two others injured.
CLARKSVILLE, TN・5 HOURS AGO
WKRN News 2

Downtown Clarksville's skyline is about to change, as a new four-acre development is now under construction.
CLARKSVILLE, TN・2 DAYS AGO
WKRN News 2

Two new people were added to Nashville's "Top 10 Most Wanted" list this week, including a man suspected of shooting and killing a woman inside her apartment.
NASHVILLE, TN・3 DAYS AGO
WKRN News 2

According to a police affidavit, K-9 officer Peggy alerted officers to the smell of marijuana coming from two pieces of luggage from an American Airlines flight from Dallas.
NASHVILLE, TN・1 DAY AGO
WKRN News 2

Rent prices nationwide increased at record rates in 2022, and while the end of the year brought a slight cool down, the news wasn't sweet music to the ears of renters in Music City.
NASHVILLE, TN・1 DAY AGO
WKRN News 2

A man who appeared on Nashville's 'Top 10 Most Wanted' list for his alleged involvement in a deadly August 2020 crash was arrested in Bowling Green, Kentucky Thursday morning.
NASHVILLE, TN・2 DAYS AGO
WKRN News 2

The state rested its case Friday afternoon in the murder of a Nashville nurse on I-440.
NASHVILLE, TN・16 HOURS AGO