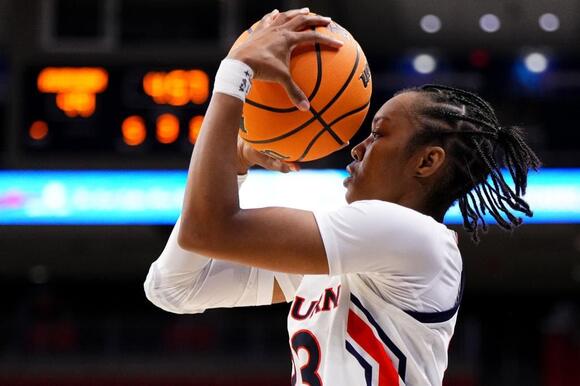 Honesty Scott-Grayson and Aicha Coulibaly lead the Tigers to a gutsy, emotional victory in Las Vegas

Auburn women's basketball was put to the test over its thanksgiving slate. After starting their season with four consecutive home games, the Tigers took to the sin city to do battle on the hardwood in the Las Vegas invitational; after suffering a shootout defeat in their first contest with No. 5 Indiana, the orange and blue sought redemption in their clash with Colorado State on Saturday evening.

Much like the group's Friday night contest, redshirt senior Honesty-Scott Grayson came out of the gates on nothing short of a warpath.

After dropping 22 points fewer than 24 hours prior to tipoff, the Tigers' standout guard wasted no time challenging the Colorado State defense, posting 13 points in the first 20 minutes alone and reminding the world of her ability to shoot from range.

Scott-Grayson was not forced to handle the green and gold on her lonesome; continuing the Tigers' identity to this point in 2022, junior Aicha Coulibaly was her usual self in the clash, forcing her way to the rim and making her presence known on the glass.

The dynamic duo continued their strand of exceptional play in the contest's final 20 minutes, opening up the Auburn offensive attack, providing the likes of Sydney Shaw and Sania Wells to join the scoring brigade.

Coulibaly and Scott-Grayson combined for 35 of Auburn's 73 points on the evening; Wells and Shaw combined for three buckets from beyond the arc.

Midway through the fourth quarter of play, freshman Kharyssa Richardson suffered what appeared to be a serious injury after competing for a rebound, delaying the contest more than 30 minutes; according to the Auburn radio broadcast, Richardson was alert and received medical attention immediately. The Auburn Daily will continue to monitor Richardson's status and provide updates as they become available.

Coach J's squad will be back in action to tip off a six-game home stand on Wed. Nov. 26 when the Trojans of Arkansas-Little Rock come to Neville Arena in a potential redemption-matchup for the Tigers. The conclusion of the two-year home-and-home is set to tipoff at 12:00 p.m. CT on SECN+ and the Auburn Radio Network.

The memes were unleashed after Auburn blew out Georgia 94-73.
AUBURN, AL・13 HOURS AGO
Auburn Daily

Will Hugh Freeze call plays this season for Auburn? 'I'm going to call a share of them'

Hugh Freeze informed the media on what his plans are for offensive play-calling in his first season at Auburn.
AUBURN, AL・7 HOURS AGO
Auburn Daily

The Tigers move to 17-5 on the season after an absolute beatdown of the Bulldogs.
AUBURN, AL・1 DAY AGO
Auburn Daily

Pettiford is a top three point guard in the 2024 class.
AUBURN, AL・1 DAY AGO
Auburn Daily

How to watch the Auburn basketball game vs the Georgia Bulldogs

Here's how to watch the Auburn basketball game against the Georgia Bulldogs.
AUBURN, AL・1 DAY AGO
Auburn Daily

Jeremiah Cobb has signed with the Auburn Tigers

The Opelika defensive lineman has committed to the Tigers
OPELIKA, AL・1 DAY AGO
Auburn Daily

Auburn's first signing day of the Hugh Freeze era is in the books.
AUBURN, AL・13 HOURS AGO
Auburn Daily

The new head coach of the Tigers is down in Mobile for the annual event.
AUBURN, AL・2 DAYS AGO