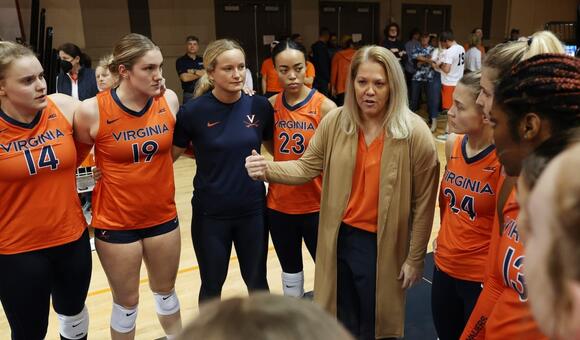 The 2022 Virginia volleyball season came to an end on Saturday afternoon as the Cavaliers fell to North Carolina 25-15, 25-16, 25-20 at Carmichael Arena in Chapel Hill.

UNC used an 8-1 run early in the first set to build a lead as large as 12 points en route to a dominant 25-15 win in the opening set. Another big 7-0 burst for the Tar Heels gave them a commanding lead in the second. UVA responded with a 4-0 run to make things interesting, but North Carolina outplayed Virginia down the stretch to take the second set 25-16.

The third set was tightly-contested with UNC leading 15-13 midway through, but the Tar Heels then went on a pivotal 5-0 run. Virginia narrowed the gap to as little as three points but UNC managed to put the third set away 25-20 to clinch the victory.

The ACC's No. 1 offense and No. 1 defense go head-to-head on Tuesday night in Charlottesville
CHARLOTTESVILLE, VA・18 HOURS AGO
Cavaliers Now

See the full schedule of UVA sporting events for the upcoming week, including how to watch the Hoos online
CHARLOTTESVILLE, VA・6 HOURS AGO
Cavaliers Now

The Cavaliers fell two spots to No. 8 after their seven-game winning streak was snapped in Saturday's loss at Virginia Tech
CHARLOTTESVILLE, VA・1 DAY AGO
Cavaliers Now

Previewing each game on the schedule for 2023 UVA men's lacrosse season
CHARLOTTESVILLE, VA・2 DAYS AGO